Boeing has achieved multiple qualifications for its worldwide network of 787 training campuses. The qualifications mean Boeing Flight Services has training devices that are ready to be used with an approved training course in locations around the globe. 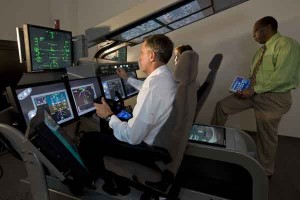 “The innovations of the 787 Dreamliner don’t end with the airplane itself,” said Sherry Carbary, vice president, Boeing Flight Services. “Boeing is changing the game through continued innovation in our advanced suite of training technologies. By bringing this cutting-edge training directly to airlines in the regions of the world where they’re based and serve their passengers, we’re offering our customers the flexibility and efficiency of flight crew training where they need it, when they need it,” Carbary said.

Full-flight simulators and other flight training devices for commercial pilot training require qualifications from each airline’s home country regulatory agency. Boeing is qualifying its network of 787 training devices with multiple regulators in order to allow airlines the maximum options and regional locations for training their crews.

Boeing operates 787 training campuses in five locations: Seattle, Singapore, Tokyo, London Gatwick and Shanghai. As part of the qualification process, Boeing demonstrated, with the regulators’ concurrence, that the training devices located at the five campuses around the world were similar or identical in the way they operate.

Last month the CAAC qualified the Shanghai Boeing training campus for 787 training including the full-flight 787 simulator and the 787 flight training device. With this achievement, Boeing has received more than 20 separate qualifications in five locations on three continents in support of 787 entry into service beginning later this year.