Boeing celebrated the opening of a new P-8 aircraft production facility near Boeing Field in Seattle. The refurbished factory gives Boeing and its P-8 teammates the space they need to install mission systems and conduct tests on aircraft for current and future customers. 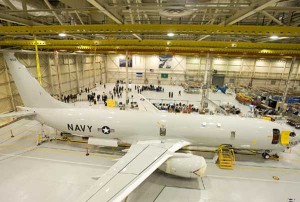 “The new factory is a great fit as Boeing transitions to building production aircraft, in part because it allows us to incorporate a leaner workflow,” said Chuck Dabundo, Boeing vice president and P-8 program manager. “We’ll complete work on the P-8A Poseidon aircraft for the U.S. Navy and the P-8I aircraft for the Indian navy in this facility, and plan to use this space for future P-8 customers’ aircraft as well.”

The U.S. Navy plans to purchase 117 P-8A anti-submarine warfare, anti-surface warfare, intelligence, surveillance and reconnaissance aircraft to replace its existing P-3 fleet. Initial operational capability is scheduled for 2013. The Indian navy signed a contract for eight P-8I aircraft in January 2009. Boeing will deliver the first P-8I within 48 months of contract signing, and the remaining seven by 2015.

Boeing Commercial Airplanes employees assemble the P-8 aircraft — which are based on the company’s Next-Generation 737 commercial airplane — in Renton, Wash. Following final assembly, the P-8s make a short flight to Boeing Field. Inside the new facility, Defense, Space & Security employees will complete systems installation and testing prior to customer delivery.

Boeing is using a proven in-line production process to efficiently design and build the aircraft. All aircraft modifications unique to the P-8 are made in sequence during fabrication and assembly. Implementing established best practices and common, commercial production-system tools enables the team to reduce flow time and cost while ensuring quality.