Boeing delivered the 10th C-40A transport/cargo aircraft to the U.S. Navy. The Boeing 737-700 commercial derivative was modified at the company’s Wichita facility for its Navy mission.

“The C-40A has a critical mission to deliver personnel and supplies to all areas of the world, and we’re proud to play a part in making sure that can happen,” said Steve Wade, general manager of Boeing Global Transport & Executive Systems. 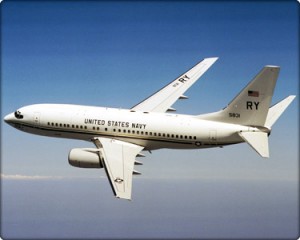 The C-40A is equipped with a main-deck cargo door and can be configured for troop transport, cargo transport or both. With superior range and performance; a state-of-the-art flight deck; 21st century avionics; and quiet, clean, fuel-efficient engines, the C-40A increases the Navy’s capability for rapid response to the fleet worldwide.

“The C-40A plays an important role in the Navy Unique Fleet Essential Airlift (NUFEA) fleet,” said Vice Adm. Dirk Debbink, Chief of Navy Reserve. “These fuel-efficient, extremely flexible logistics-support aircraft are an integral part of every maritime mission, from humanitarian assistance to power projection. The bottom line is the ability of the C-40A to provide our nation important, Navy-unique airlift capability at a lower cost. We welcome this new aircraft into the fleet!”

The Navy C-40As, which replace the service’s fleet of C-9s, are based at the Naval Air Station (NAS) Joint Reserve Base (JRB) in Forth Worth, Texas, at NAS Jacksonville, Fla., and at NAS North Island in San Diego, Calif. The new aircraft will be immediately stationed at NAS JRB Fort Worth, where crews will provide transition training for crews at NAS Oceana, Va., a new C-40A location scheduled to open next year.

Boeing is on contract to deliver two additional C-40As; one 737 is currently being modified at the Wichita facility, while the other is on the Boeing Commercial Airplanes production line in Renton, Wash.

“We’re looking forward to continuing to enhance the Navy’s fleet of C-40As with as many aircraft as are required to support this mission,” said Wade. “The C-40A is a proven workhorse, whether it is delivering humanitarian aid to the scenes of natural disasters or military equipment to ships and troops on the ground.”