Air Power against the Maoists 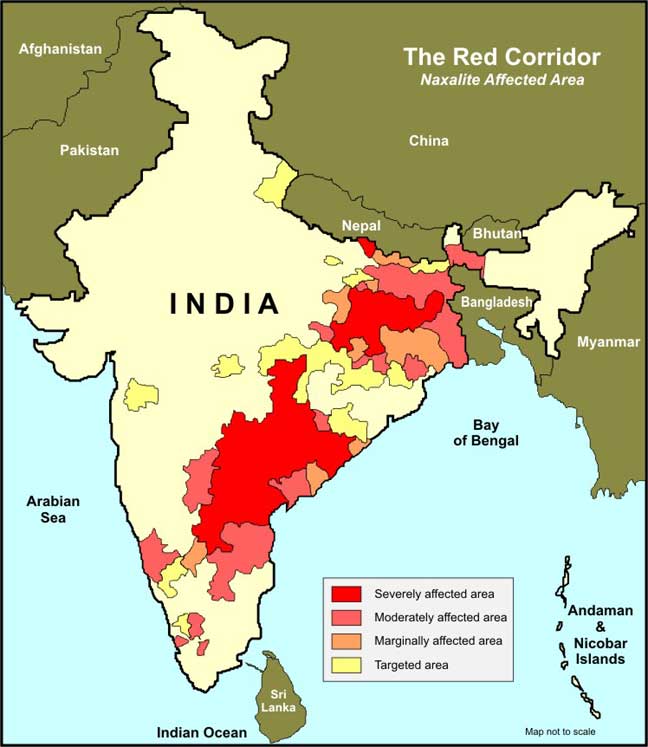 Employment of air power to search and destroy targets has been carried out on a very large scale in Afghanistan and Pakistan by the US forces. Unmanned Aerial Vehicles (UAVs) and Unmanned Combat Aerial Vehicles (UCAVs) can remain airborne for long periods, carry out surveillance and send real-time intelligence back to control centres located in distant parts of the world. The UCAVs are then used in the attack mode to destroy the identified targets. On many occasions, despite the technical prowess that the US possesses, innocent civilians including women and children have been among the casualties leading to human rights organisations condemning such incidents. In the Indian scenario also similar mistakes can occur if air power is utilised to target Naxals or Maoists. It should be remembered that the level of technology at which Indian forces operate, is far below that of the US military. Hence the possibility of error is greater. Any killing of innocents will help boost the Naxal propaganda while attracting adverse reaction both from within the country and outside.

Attack Helicopters in the Kashmir Valley

Based on the success achieved by armed helicopters in the Kargil War, in the year 2000, a decision was taken to employ helicopter gunships of the Indian Air Force (IAF) in the battle against militants and terrorists who had infiltrated into the Kashmir Valley. Two Mi-35 attack helicopters were moved to a Forward Area Refuelling and Rearming Point (FARRP) for this mission. After detailed briefings on the ground situation and extensive deliberations between the IAF and HQ, Northern Command of the Indian Army, the Standard Operating Procedures (SOP) were formulated to ensure that offensive missions could be accomplished without collateral damage as the militants usually operated from or near inhabited areas. An Indian Army officer with thorough knowledge of the local terrain and the behaviour pattern of the militants was also carried onboard as part of the attack helicopter crew. However, as the officer could not be accommodated in the cockpit, there was no alternative but to position him in the passenger cabin, though it was, operationally, not the best arrangement.

In Kargil, the infiltrators had operated on icy mountain peaks devoid of vegetation and far removed from inhabited areas.

The attack helicopters were ordered to ‘scramble’ on two occasions without success as there was delay in communication between the Army officer onboard and the pilots. It was then decided to employ the Mi-17 armed helicopters in place of the Mi-35 attack helicopters for such missions. The Mi-17 had some advantages as after removal of the rear clamshell door, Medium Machine Guns (MMGs) or Light Machine Guns (LMGs) could be anchored to the floor of the helicopter and these could engage targets while the Mi-17 was flying away from the target in the receding mode. Communication between the pilots and the Army ‘guide’ also improved as all three were collocated in the cockpit. During one of the missions, the crew did get an opportunity to fire at targets on the ground but the results could not be ascertained. If the attacks had caused any casualties, these were possibly removed before the ground forces reached the area.

Experience of missions in the Kashmir valley was compared with that gained in the operations during the Kargil War and discussed threadbare amongst the command and staff during briefings at every level. In Kargil, the infiltrators had operated on snow-bound mountain peaks that were devoid of vegetation and were far removed from inhabited areas. In the anti-terrorist missions in the Kashmir valley, attack helicopters had to operate close to populated areas with sparse to dense vegetation cover. Visual location of terrorists was impeded by foliage.

Distinguishing friend from foe was nearly impossible due to the distances involved. Operations against the infiltrators in the Kashmir valley were called off a few days later.

In 1956, Toofani jets of the IAF were employed in Nagaland against the rebels.

The IAF and Counter-Insurgency (COIN) Operations

Over the years, the IAF has accumulated some experience in the employment of air power in Counter-Insurgency Operations. In 1956, Toofani jets of the IAF were employed in Nagaland against the rebels and Vampires operated against insurgents in the North East Frontier Agency in 1960. In 1966, Aizwal, the capital of Mizoram was overrun by the forces of the Mizo National Front and the response by the Indian state included employment of Hunter and Toofani combat aircraft. IAF helicopters have been part of the United Nations Peace Keeping Missions and have operated in foreign countries in the COIN role, with ‘Operation Khukri’ in Sierra Leone being a well-documented mission. Attack helicopters Mi-17 and Chetak Light Utility Helicopters have participated in the UN Peace Keeping Operations.

Genesis of the Problem

The threat posed by Naxalites and Maoist in some parts of the country today constitute problems and challenges that are completely different from those that have been experienced in the past. There has been considerable and frequent debate in the media and public forums on the employment of air power in anti-Naxal and anti-Maoist operations. To begin with, Naxalites and Maoists are Indian citizens who have taken to violent means to attain their avowed objective of overthrowing the duly elected government by 2050, a somewhat over-optimistic aspiration. A brief look at the origins of these movements would be necessary to understand the complexities and the nuances involved in what Prime Minister Manmohan Singh has termed as, ‘the gravest threat facing our country today’.

In 1967, the Communist movement in India went through a turbulent period eventually culminating in a split which resulted in the emergence of a splinter group called the Communist Party of India (Marxist & Leninist) or CPI (ML). That year also saw an attempt by the tribals in Naxalbari, a remote village in West Bengal, to repossess their lands taken away by the landlords. In the ensuing clashes, apart from the several tribals killed, one police officer also perished. This incident thus acquired visibility and attracted support from the revolutionary elements in Communist parties in several states. Although the Naxal Movement was largely contained, soon a coordination committee resolved to carry the Movement forward.

Naxalites and Maoists are Indian citizens who have taken to violent means to attain their avowed objective of overthrowing the duly elected government by 2050.

In 1968, they came out with their cardinal Principle of ‘Allegiance to Armed Struggle and non-participation in elections’. Criminal neglect of tribal areas, dispossessing the tribals of their lands and forests and alienation of landless peasants through total lack of governance were the main propellants fuelling the Naxal Movement.

It has been more than 40 years since the Movement began. However, there has been no serious effort or focussed approach to solve the problem. Grabbing of tribal land for the purpose of mining and setting up of industries without a credible rehabilitation plan or adequate compensation for the displaced population has resulted in the Movement spreading to many parts of the country. At one time, 180 districts of the country, spread over the ten states of West Bengal, Odisha, Andhra Pradesh, Chhattisgarh, Jharkhand, Maharashtra, Bihar, Uttar Pradesh, Madhya Pradesh and Karnataka were affected by this so-called ‘Red Menace’. In 2006, the Research & Analysis Wing (R&AW) estimated that there were about 50,000 regular cadre Naxals in addition to 20,000 armed cadres.

With so many sympathisers and funds received as contributions, the Naxals have been able to obtain arms and ammunition steadily. Low level raids of poorly defended rural police outposts supplemented their weapon stock. Contact with ideologically compatible elements in Nepal and China have helped the Naxals train their armed cadres. Naxals are ‘sons of the soil’ with an excellent understanding of the terrain they operate in.

Induction of the IAF or Indian Army may appear to be an admission of the strength and capability of the Maoists / Naxals.

A police force from outside would find it extremely difficult to track, locate and eliminate the armed cadres. On the other hand, the local security forces would find their near and dear ones threatened with dire consequences including death if they acted against the Naxals. And in the event of police action, the Naxal cadres would ‘melt’ away into the tribal villages. All this has encouraged them to progressively expand the scope of their war against the state.

The state of Andhra Pradesh with its Greyhound Force has had notable success against the Maoists. This 2000-strong force is well-trained in jungle warfare, has modern weapons compatible with its task and moves in small groups to disrupt and destroy the Maoist hide-outs. The Force adopts guerrilla warfare tactics and is well-versed in survival techniques. The ‘Greyhounds’ operate in tandem with the local police forces and have good intelligence gathering capabilities. Trained to operate at night, one of their main objectives is to eliminate the Maoist leadership. These measures have resulted in a steep decline in Maoist activity in Andhra Pradesh. If other states also raise similar forces and deploy them in Maoist/Naxal infested areas, the success rates would show a remarkable upward trend. Another aspect that needs attention is development of tribal areas that are currently not affected by this problem. Unless there is real progress in these areas, more and more tribals could inevitably be drawn to the Naxal Movement and adopt the path of violence.

But the Maoists have also wreaked havoc with deadly attacks in some states. In April 2010, 76 security personnel were killed and 50 wounded at Dantewada in Chhattisgarh in a Naxal attack. In May 2010, 15 policemen and 20 civilians were killed close to the same area. In June 2010, 26 CRPF personnel were killed in Narayanpur district, Chhattisgarh. In late 2011, the security forces succeeded in eliminating the Naxal military commander ‘Kishenji’. In retaliation, the Naxals abducted two Italians and an IAS officer in 2012. While all three were subsequently released, the kidnapping demonstrated the changing strategy and reach of the Naxals. In March 2012, 12 CRPF personnel were killed in a landmine blast in Gadchiroli in Maharashtra.

2 thoughts on “Air Power against the Maoists”