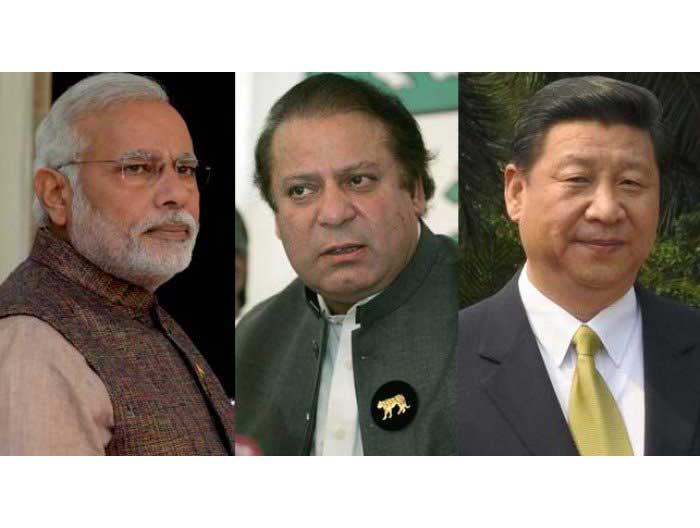 As Prime Minister is preparing to pay his maiden visit to Beijing (as Prime Minister), it necessary to come back on another visit, President Xi Jinping’s trip to Pakistan and the enormity of the ‘gifts’ that Chinese President brought in his luggage as he landed in Islamabad.

Beijing has decided to help Pakistan to develop a China-Pakistan Economic Corridor which will eventually link up its pet project, the two New Silks Roads (also known as ‘One Belt, One Road’).

“Xi arrived in Islamabad bearing real gifts: an eye-popping $46 billion worth of planned energy and infrastructure investment to boost Pakistan’s flagging economy. This would include adding some 10,400 megawatts to Pakistan’s national grid through coal, nuclear and renewable energy projects.”

Beijing has decided to help Pakistan to develop a China-Pakistan Economic Corridor which will eventually link up its pet project, the two New Silks Roads (also known as ‘One Belt, One Road’).

In other words, the Chinese-sponsored port of Gwadar on the Arabian Sea will be connected through the Karakoram Highway, to the Xinjiang province in China’s Far West and Central Asia …and later Middle East, Africa and Europe.

The ‘corridor’ will have railways, roads, optical fiber cables, dams (to produce the necessary electricity), pipelines, you name it!

Observers marveled at Beijing kindness (and wealth), but you should not be fooled by the Chinese generosity: Beijing is investing for Beijing!

China, which is facing financial difficulties at home, with a slowdown of the economic engine, has devised a double Roads scheme to rebalance its own economy and perhaps more importantly, to become the sole leader of Asia. The two Silk Roads project and the Asian Infrastructure Development Bank have to be seen in this perspective.

Pakistan, China’s good friend, is the perfect ‘partner’ (or vassal state, if you look from another angle). It is geographically ideally positioned with an access to the sea in the South and to Central Asia in the North.

Today, China is in the same position as the British at the time of India’s independence. By buying Pakistan’s allegiance, Beijing believes that it will be able to control and dominate Asia by linking the Belt and the Road.

In 1946-47, as the British were ready to depart the subcontinent, they devised a way to keep their influence in Asia and the world. During the previous two centuries, the defence of the Empire had been centered on the Indian subcontinent and the Indian Ocean (also known as the British lake). The British chiefs of staff had submitted a report on the strategic consequences of Britain’s departure from India; the generals agreed that Pakistan was crucial for the Empire to keep its influence; more important than the other future dominion (India), was the Islamic State which could provide air bases in the north of the country (to control Soviet Union) and naval bases opening to the Arabian Sea in the south. A brotherly contact with the Muslim states in the Middle East was an added bonus.

It explains why London put its stakes on Pakistan.

The dies were cast in May 1947, when the chiefs of staff filed their final report:

“From the strategic point of view there were overwhelming arguments in favour of West Pakistan remaining within the Commonwealth, namely that we should obtain important strategic facilities…”

Subsequently this policy was implemented, partly with the unknowing (not to say foolish) collaboration of the Congress Party.

Today, China is in the same position as the British at the time of India’s independence. By buying Pakistan’s allegiance, Beijing believes that it will be able to control and dominate Asia by linking the Belt and the Road.

A discredited and financially broke Islamabad, is only too happy to rely on their ‘dependable’ friend (as per Nawaz Sharif’s words, when he received Xi Jinping).

Billboards in Chinese and English were seen in Islamabad, the friendship between the Lord and the Vassal is now ‘higher than mountains, deeper than oceans, sweeter than honey, and stronger than steel.’

…there is a far more serious problem faced by Beijing: Pakistan is a haven for terrorists and China likes neither terrorism, nor dissidence.

China plays on the credulity of their all-weather ‘friend’; in an article published in some Pakistani papers before his arrival, Xi wrote:

“This will be my first trip to Pakistan, but I feel as if I am going to visit the home of my own brother.”

He added that the bilateral relationship ‘has flourished like a tree growing tall and strong’. It is very touching, isn’t it?

“After all, China and Pakistan may share a border, but cultural ties between the two nations and its people are thin, to put it mildly.”

However, there is a far more serious problem faced by Beijing: Pakistan is a haven for terrorists and China likes neither terrorism, nor dissidence.

A couple of weeks ago, Beijing started a crackdown on ‘visible signs of Muslim religious observance’ among the Uighurs, the ethnic minority living in Xinjiang. A man is said to have been condemned to a six-year prison sentence for daring to grow a beard in the Muslim region.

Without even talking of extreme cases like this one, how is Beijing going to tackle the movements of terrorists from Pakistan to Xinjiang, once the ‘corridor’ is wide open to goods and people. Or will it be open only for oil, gas and raw materials? It does not make sense.

The only solution for Beijing is to twist Pakistan’s arm and make sure that terrorism stops or at least is reduced to its ‘export to Kashmir’.

The only solution for Beijing is to twist Pakistan’s arm and make sure that terrorism stops or at least is reduced to its ‘export to Kashmir’.

On March 26, when the Chief of Naval Staff of Pakistan, Admiral Muhammad Zakaullah, visited Beijing to prepare President Xi’s trip to Islamabad, the Vice Chairman of China’s Central Military Commission, General Fan Changlong pledged to ‘deepen cooperation with Pakistan in anti-terrorism, maritime security and military technology.’ Beijing is clearly nervous that their investment may be jeopardised by the jihadis. Fan told Zakaullah that China hopes to enhance coordination and cooperation with Pakistan on regional security affairs (read terrorism).

As President Xi Jinping arrived in Pakistan, he immediately met with Pakistani Chairman Joint Chiefs of Staff Committee, Rashad Mahmood and his colleagues of the Army, Air Force and Navy in Islamabad.

“Hailing the important role the Pakistani military has played in the development of China-Pakistan relations, Xi said that the understanding and support of the Pakistani military is necessary for the two countries to forge a community of shared destiny,” adding that “Xi spoke highly of the anti-terror cooperation between the two countries …and staunchly back Pakistan’s efforts to counter terrorism and safeguard national security.”

The message is clear,

“We are going to help you, we are going to invest billions and billions of dollars to save your economy, but control the terror in your country, we are with you.”

As a bonus, China will sell eight Type 041 Yuan-class diesel-electric submarines to Pakistan for nearly US $ 5 billion. Who will pay for China’s ‘biggest-ever arms export deal’ is irrelevant (Beijing is likely to extend a long-term loan, at a low interest rate, to cover the cost for the submarines).

The irony is that China may succeed where the United States and India have always failed: to control the Pakistani Army and its different branches and ultimately tackle terrorism…

“China and Pakistan are neighbours boasting traditional friendship, and the two sides maintain normal cooperation in the military industry and arms trade.”

If Islamabad manages to control terrorism infiltration along the Silk Road, it is worth the investment for Beijing; especially as Pakistan uses the subs to keep a tab on India in the Arabian Sea. If it does not happen, Beijing has a big problem.

The irony is that China may succeed where the United States and India have always failed: to control the Pakistani Army and its different branches and ultimately tackle terrorism, at least in its more blatant forms.

This might be in Mr. Modi’s mind as he proceeds to Beijing.