Will Khan Sheikhoun Reshape the War in Syria? 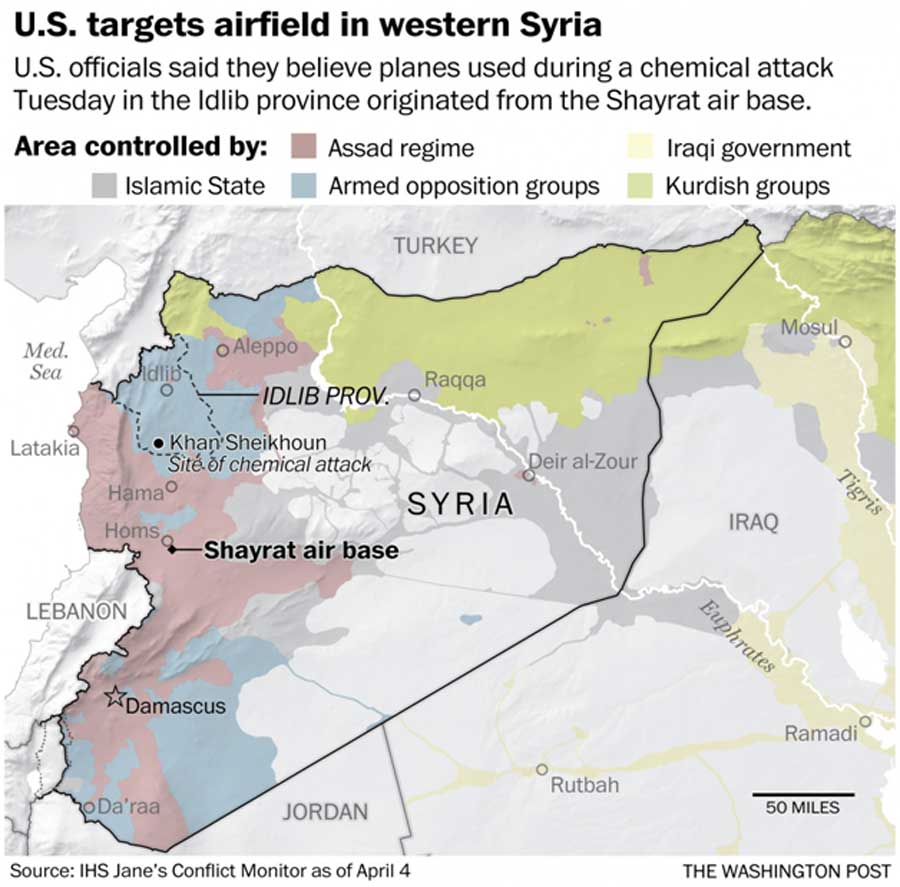 Late on April 6, the United States carried out missile attacks on the Shayrat airbase outside Homs in Syria targeting “aircraft, hardened aircraft shelters, petroleum and logistical storage areas, ammunition supply bunkers, air defense systems and radars.” The number of casualties and extent of damage to the airbase is not yet clear, but according to Syrian government sources it has “led to losses.” The US action has come as a response to the chemical attack on Khan Sheikhoun—a town in Idlib province—on April 4 in which more than 70 civilians including children lost their lives and hundreds others were injured. According to the Pentagon spokesperson, the US suspects that the Shayrat airbase was used to launch the sarin nerve gas in Khan Shekhoun, hence it was targeted by the US strikes to prevent future chemical weapon attacks. President Trump said: “Years of previous attempts at changing Assad’s behavior have all failed” and it is in the vital interest of US and its allies “to prevent and deter the spread and use of deadly chemical weapons.”

The US move to launch attacks on a Syrian airbase is significant because till last week things had looked different as the new administration had shown no inclination to intensify the US involvement in Syria. On March 30, US Ambassador to the United Nations Nikki Haley had said that the US is no longer focused on “getting Assad out”. The same day Secretary of State Rex Tillerson, during a visit to Ankara, had said that the fate of Bashar al-Assad “will be decided by the people of Syria.” These statements indicated that the Trump administration is not only disinterested in Syria but also scaling down its rhetoric on the need for a solution involving Assad’s stepping down, unlike the Obama administration which, despite focusing on fighting the ISIS, had maintained the position of seeking to remove Assad by reaching a deal with Russia.

In fact, the Russian decision to enter the war in Syria on behalf of the regime in September 2015 and the fall of Aleppo in December 2016 had indicated that the war has decisively shifted in favour of the Syrian regime. The peace talks in Astana and cease fire agreement anchored by Russia, with Iran and Turkey playing important roles, had further indicated that the US is no longer seriously involved in resolving the Syrian crisis. It was content with supporting the Kurdish-led Syrian Democratic Forces (SDF) fight the ISIS. Further, the divided Syrian opposition had more or less lost direction and was on the verge of collapse leading to a situation where the future of Syria had become coalesced with Assad’s fate.

Hence, the chemical attack on Khan Sheikhoun has come at an interesting time and has raised many questions, especially about the Russian reaction. Though this is not the first time chemical weapons have been used in Syria, it was the deadliest in terms of casualties and indicated the willingness of the Assad regime to test the Trump administration. It raised a question on the 2013 deal between the US and Russia to eliminate the Syrian chemical weapons stockpile. More importantly, US credibility was challenged because of its inability to take decisive action against the regime that has acted with impunity in dealing with the rebels. The regime’s ability to prolong the war and not cede any space to the opposition and Russian willingness to back the regime and its totalitarian approach created serious doubts about US ability to decisively intervene on behalf of its allies.

The Syrian regime has denied using chemical weapons saying that it was the opposition and terrorist groups that used them. Russia, on the other hand, has stated that the chemical release was a result of an attack by regime forces on a chemical arsenal held by rebels in Idlib. It is, however, possible that the regime used the chemical weapons with the objective of taking complete control of the war and not allowing the opposition to have any say in the future of Syria. It gave two warnings to the rebels that they will not have any space in Syria, that the regime is committed to take control of the whole of Syrian territory and will not hesitate to use chemical weapons to achieve its objectives.

The Russian reaction to the US missile strikes has been strong. Russian presidential spokesperson Dmitry Peskov said that the US strike is a violation of international law and will have “negative consequences” on the Syrian crisis, adding that it will seriously affect US-Russia relations. The world will have to wait for the next Russian move to know the full extent of the consequences of the US strikes as the future course of the war will depend on how Russia choses to react. It is, however, unlikely to escalate into a full blown US-Russia confrontation because strong statements notwithstanding, it is clear that the US informed Russian forces in advance and took precautions not to target Russian forces.

The US strike is an important development as far as the war in Syria is concerned and indicates a change in its strategy. Until now, Trump had continued the Obama policy of fighting the ISIS and leaving the Syrian regime’s fate to Russia and Iran. But the strike on Shayrat airbase indicates that the US wishes to play a proactive role in deciding the fate of Syria. Tillerson, who is set to visit Moscow next week, said that Russia failed to uphold its responsibility of preventing the use of chemical weapons and added that “either Russia has been complicit, or Russia has been simply incompetent,” underlining that Washington will use the new developments as a bargaining chip with Moscow.

The Syrian decision to use chemical weapons on civilian targets in Khan Sheikhoun in an effort to seek control of the last rebel held territory of Idlib and the US reaction have created a new dynamics in the Syrian crisis. It may not prove to be a game changer but has the potential to seriously reshape the war in Syria and the direction in which it is heading. It also underscores that the US will play a bigger role in finding a solution for Syria than was expected after the fall of Aleppo.