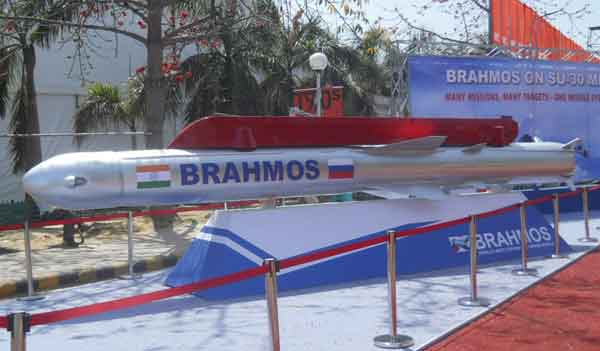 Everything going as planned, the formidable, Indo Russian supersonic cruise missile, BrahMos, would be exported to Vietnam, with which India’s diplomatic, commercial and strategic relations are on a strong footing .The sale of BrahMos to Vietnam would open up a lucrative market for this high precision, lethal missile system in the countries of South East Asia region. But then, many hurdles would need to be overcome before India actually initiates the export of BrahMos to Vietnam, which is keen on positioning this missile as a counterpoise to possible “Chinese misadventure.”

In fact, way back in 1979, Vietnam had fought a bloody border war with China. And now Vietnam has mounted a serious challenge to the Chinese claim over the resources of the disputed South China Sea region. As it is, the prospect of the BrahMos sale to Vietnam had figured prominently in the bilateral talks between the Indian Defence Minister Manohar Parrikar and his Vietnamese counterpart Gen Ngo Xuan Lich in early June 2016. If India’s plan to sell BrahMos to Vietnam assumes a practical shape, it would certainly mark a quantum shift in the strategy of India—currently the largest arms importer—in terms of boosting defence export with an eye on bolstering the defensive and offensive capabilities of its ally while at the same time boosting the domestic revenue.

Media reports reveal that the Prime Minister Narendra Modi has ordered the New Delhi based Indo-Russian joint venture, BrahMos Aerospace, to give quickening impetus to the process of exporting this missile to five countries topped by Vietnam. Indonesia, South Africa, Brazil and Chile are other countries in the priority list for the sale of BrahMos. Other countries that have evinced keen interest in the potentials of the BrahMos missile include Philippines, Malaysia, Thailand and the UAE. Strategic analysts believe, for long, New Delhi was reluctant to sell BrahMos to Vietnam fearing a backlash from China which considers BrahMos to be“a veritable  destabilizer.” “Policy makers in New Delhi were long constrained by the belief that advanced defence cooperation with Washington or Hanoi could provoke aggression and undesirable responses from Beijing,” says Jeff M Smith, Director of Asian Security Programme at the American Foreign Policy Council in Washington. In fact, it was in 2011 that Vietnam had made its first request to India for the acquisition of BrahMos.

But then there is no clarity as to whether Russia has given the actual final go ahead to the Indian proposal to export BrahMos to Vietnam; Russia and China have close strategic and defence relationship. In fact, the erstwhile Soviet Union had helped China in laying the foundations of its defence industry, missile production programme and space exploration enterprise in a big way.  Of course, sometime back Sudhir Kumar Mishra, Managing Director and Chief Executive Officer (CEO) BrahMos Aerospace had revealed that both India and Russia have agreed on the proposal to export the missile to a list of mutually agreed countries for defensive purposes. If India succeeds in exporting BrahMos to friendly countries on a large enough scale, it would certainly give quickening impetus to the export of high ticket defence hardware of Indian origin in a big way. Further, the export of BrahMos could mark the beginning of India’s transition from being a largest importer of defence hardware to an up and coming hub of arms export. At the end of the day, the initiative to export BrahMos followed by other defence and aerospace products from India could also contribute to the creation of a robust Indian military industrial complex.

BrahMos is known to be the first supersonic cruise missile in its class that is in service. This missile which operates on “fire and forget” principle is known for its tremendous destructive power generated due to large kinetic energy on impact. Land attack and naval versions of the missile are already in service with the Indian army and Indian navy respectively. While the air launched version of  BrahMos is expected to be fitted on into  some of the  fighter jets of Indian Air Force after the completion of its  qualification trials, the undersea launched version of BrahMos is likely to be fitted into submarines being built under Project 75.

Meanwhile, there are reports to suggest that Block III variant of BrahMos in service with the Indian army would be bought by Russia. ”Now that Russia has decided to buy the Su-30MKI fighter aircraft, the BrahMos missiles have a good chance of coming into service with the Russian armed forces,” said Petr Topychkanov,  a Senior Researcher at the Centre for the International Security of the Institute of World Economy and International Relations, Russian Academy of Sciences. Russian armed forces are now using only domestically built fighting equipment to the total exclusion of combat hardware made outside Russia.

Incidentally, the range of BrahMos has been deliberately kept at 290-km so that it falls short of 300-km limit set by the Missile Technology Control Regime (MTCR). As such, the export of BrahMos and other Indian short range missiles with less than 300-km limit can be facilitated without inviting strictures from MTCR. Meanwhile, India’s plan to join MTCR has been smoothened following no objection from 34 member countries constituting. Luckily, for India, China is not a member of MTCR.

Significantly, for quite some time now, there has been animated discussion towards giving a big thrust forward to the export of combat hardware from India. The current dispensation has been losing no  opportunity to highlight the need for the country to shed its “unsavoury distinction of being the largest defence importer” by paving way  for the large scale export of domestically made combat equipment and fighting platforms. Defence Minister Manohar Parrikar has made a strong pitch for boosting defence export from India with the target of earning US$2-billion by 2018.

It is in the fitness of things that Parrikar has projected India’s home grown fourth generation, supersonic fighter jet Tejas LCA(Light Combat Aircraft) as a prized defence hardware with a reasonably good export potential. As part of the frontline fighting formation of IAF, Tejas is expected to replace the entire Mig-21 fleet made up of almost 250 fighters of Soviet era. “Functionally LCA Tejas is better than many other foreign fighters. It reacts very smoothly, fly by wire, its turn radius is very good, manoeuvrability is very good but it has limitations in the sense that it is a light combatant. It cannot go into deep penetration…It is mostly good for dogfights in your own sky or to degrade the opponent army’s command post,” said Parrikar.

All said and done, before initiating the export of Tejas, India would need to do its ground work from level zero. To begin with, Tejas is yet to be inducted into the squadrons of Indian Air Force. Further it would need to demonstrate its flying quality and fighting robustness as part of the IAF squadron. Third, the production line at the Indian aeronautical major Hindustan Aeronautics Limited (HAL) would need to be sufficiently augmented to take care of the export orders. Last but not least, a well-oiled mechanism should need to be put in place to take care of the after sales service including maintenance and spares supply so that countries buying Tejas would be in a position to sustain the fighting fitness of this combat aircraft without hindrance.

Parrikar is cautious and circumspect on India’s potential to make it big in the global defence market place in one go. “I know it is not easy. Weapons and export of defence goods have double problems. One is whom you are exporting to and the second is one has to go on checking all international requirements,” said Parrikar.  Right now, India’s defence export make around 4% of the arms, ammunition and fighting equipment imported by the country. Of course, by boosting defence export, India can stand to derive geo strategic and diplomatic mileage. On another front, it can also help the country spread its soft power in a phased manner. “Exports should be encouraged as we have friendly relations with many countries. These countries look towards India for their defence needs and if India does not give them the required equipment, it does not make you real friends,” observed Parrikar. As it is, the Defence Research and Development Organisation (DRDO) has for quite some time been highlighting  the point that there is a huge potential for the export of missiles, fighter aircraft and related defence hardware from India. Momentum to turn India into a vibrant defence export hub seems to be picking up.