Where is the LAC? 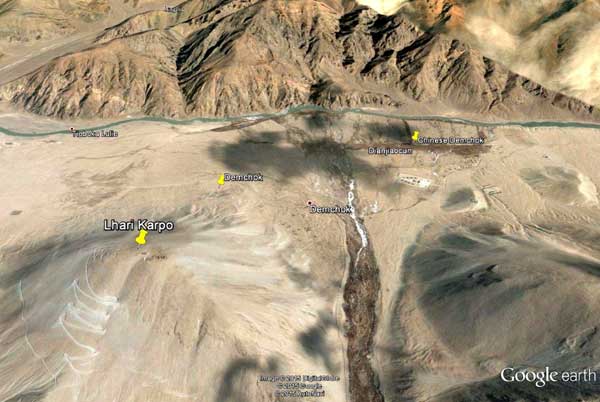 Once again, the LAC or Line of Actual Control has recently come in the news.

The latest mention came from Beijing, where China turned down an Indian proposal to exchange maps of the LAC; a move which seemed most reasonable and for-too-long delayed.

It is not the first time the LAC makes the news. Remember the visit of the Chinese President Xi Jinping to India in 2014.

Huang Xilian, the deputy director general of the Asian Division in the Ministry of Foreign Affairs told some Indian journalists: “We tried to clarify some years ago but it encountered some difficulties, which led to even complex situation. …That is why whatever we do, we should make it more conducive to peace and tranquility for making things easier and not to make them complicated.” Huang added: “We have to do many things. We have to seek comprehensive approach to this.”

This sentence means nothing, though it shows that Beijing is not interested to sort out the border issue with India.

Narendra Modi had specifically asked for a clarification on the LAC during his recent visit to China. While addressing Chinese students at Tsinghua University in Beijing (the Chinese foreign minister, Wang Yi was in attendance), he had reiterated his demand.

Huang now proposed that the two sides should have a code of conduct on the border issue: “Our position is that we have to seek some kind of comprehensive measures, not only one measure to control and manage the border to ensure peace and tranquility along the border.”

It does not make sense because these ‘measures’ already exist.

It is not the first time the LAC makes the news. Remember the visit of the Chinese President Xi Jinping to India in 2014. All started well when President Xi landed at the Sardar Vallabhbhai International Airport at Ahmedabad on September 17.

Xi and Peng Liyuan, his wife had a great taste of Modiland.

Then the planned programme went awry with the situation deteriorating fast on LAC, in Chumur in South Ladakh. Differences in ‘perception’ about where the LAC lay were known to exist, but this time, more than one thousand five hundred Chinese troops belonging to the People’s Liberation Army (PLA) and the People’s Armed Police Force (PAPF) crossed the LAC and stood a few metres away from the Indian jawans. The situation has never been so tense for years. Why this show of force at a time Xi Jinping, who is also Chairman of the Central Military Commission (CMC), was trying to instill trust in the bilateral relations? Was there a better way to sabotage the Presidential visit? It was all the more surprising as Xi had come to sell his ‘Chinese Dream’.

How could a clarification of the Chinese and Indian ‘perceptions’ complicate the border dispute? The most ironic is that the concept of a LAC was a brainchild of the Chinese.

A day later, President Xi and Modi met at Hyderabad house. At the end of the encounter, the Indian Prime Minister announced: “I suggested that clarification of Line of Actual Control would greatly contribute to our efforts to maintain peace and tranquility and requested President Xi to resume the stalled process of clarifying the LAC. We should also seek an early settlement of the boundary question.”

When he answered Modi, Xi spoke of border agreement, not about the LAC. It was telling. Later, ‘exchange of maps’ was not mentioned in the Joint Statement either.

Then nine months later, Narendra Modi went to China. Many observers expected to some progress on the border issue. But again nothing on the Joint Statement on the LAC and the famous maps; and now Mr Huang says that it would ‘complicate the issue’.

How could a clarification of the Chinese and Indian ‘perceptions’ complicate the border dispute?

The most ironic is that the concept of a LAC was a brainchild of the Chinese.

On December 17, 1959, in a letter addressed to Jawaharlal Nehru, Chinese Prime Minister Zhou Enlai used for the first time a new terminology. He wrote that the Line of Actual Control (LAC) consisted of “the so-called McMahon Line in the East and the line up to which each side exercises actual control in the West.” The term ‘LAC’ became a legal concept in the Sino-Indian agreements signed in 1993 and 1996, 2012 and 2013. The 1996 agreement states, “No activities of either side shall overstep the line of actual control.”

Beijing does not want to tell us where its ‘perception’ of the LAC is.

Now, Beijing does not want to tell us where its ‘perception’ of the LAC is.

Perhaps Beijing has decided to continue intruding from time to time into Indian ‘perceived’ territory; with no defined LAC, it is more convenient!

But there are other reasons why China does not want to tell India of its ‘perceptions’ of the LAC.

In the Eastern sector, the LAC corresponds more or less with the McMahon line. Though some minor adjustments on both sides might be required at the time of a final agreement; today, Beijing is probably under the impression that ‘fixing’ the LAC would ‘fix’ the McMahon Line. It is out of question for Beijing.

During the annual KF Rustamji lecture, National Security Advisor Ajit Doval (who is also the Special Representative for border talks with China), said that he was surprised that, while China agreed to the McMahon line being the Sino-Burmese border in 1960, it was not ready to accept the same principle for India today.

China and Burma agreed that the northern boundary would follow the ‘traditional line’, but the imperialist name [McMahon] was removed of the final agreement.

By ‘fixing’ the McMahon Line, Beijing believes that Delhi would use it to give credence to the existence of the 1914 Simla Treaty between India and Tibet. China will not accept this.

For India, it is different, the border issue is not just a question of ‘demarcating’ a line between China and India; it is also about acknowledging this ancient bonds between India and Tibet. For this reason, Mr Doval is absolutely right to call the Sino-Indian border the McMahon Line. Soon after, the Chinese Foreign ministry spokesperson Hua Chunying reacted sharply: “The Chinese side holds a consistent and clear position on the eastern section of the China-India boundary: Arunachal Pradesh is a part of Southern Tibet.” Ms Hua explained: “The Chinese Government does not recognise the McMahon Line, which is illegal.”

By ‘fixing’ the McMahon Line, Beijing believes that Delhi would use it to give credence to the existence of the 1914 Simla Treaty between India and Tibet. China will not accept this.

For the Western sector, it is more complicated. As mentioned earlier, in December 1959, Zhou Enlai was clear where the LAC in Ladakh was; Zhou had even sent a map to his Indian counterpart in 1956,: “The line up to which each side exercises actual control in this sector is very clear, just as it is in the other sectors of the Sino-Indian border. As a matter of fact, the Chinese map published in 1956, to which Your Excellency referred, correctly shows the traditional boundary between the two countries in this sector,” the Chinese Premier wrote in December 1959.

But after the 1962 conflict, during which China occupied large portions of Ladakh, the PLA did not withdraw fully behind the 199 LAC, thereby changing the location of the LAC.

By exchanging maps, it would be clear that China has not withdrawn from several places it occupied in 1962. Today, Beijing is not ready to come back to its 1959’s claims; which is why it says that it would ‘complicate’ the border issue.

Another issue, while the civilian leadership may agree to fix the LAC, the PLA generals are probably against the idea and the civilians do not always prevail in the Middle Kingdom.

A solution probably favoured by Beijing would be to ‘exchange’ the Aksai Chin area in Ladakh, vital for China, as it links Tibet and Xinjiang, against Arunachal Pradesh that is claimed by Beijing and keep the status quo in the central sector.

The Chinese like to say that the border imbroglio has been ‘inherited from history’. But, while Beijing cites British imperialism, the facts are different: there was no ‘border issue’ between India and Tibet before 1950-51, simply because the Roof of the World was a peaceful independent state. This changed when Tibet was invaded by the PLA.

In the early 1950s, having swiftly taken control of Tibet, the People’s Liberation Army progressively stopped the age-old trade and exchanges between India and the Dalai Lama’s land. China even built a road on Indian territory (without Nehru’s government noticing it); the stakes brutally changed and the border gradually became ‘disputed’.

Today, the 4,000 km-long LAC is divided in three sectors: the western, central and eastern sectors, all with large or small ‘disputed’ areas. A solution probably favoured by Beijing would be to ‘exchange’ the Aksai Chin area in Ladakh, vital for China, as it links Tibet and Xinjiang, against Arunachal Pradesh that is claimed by Beijing and keep the status quo in the central sector.

But before, Beijing needs to tell India where its perception of the border lies.

One may have to wait.