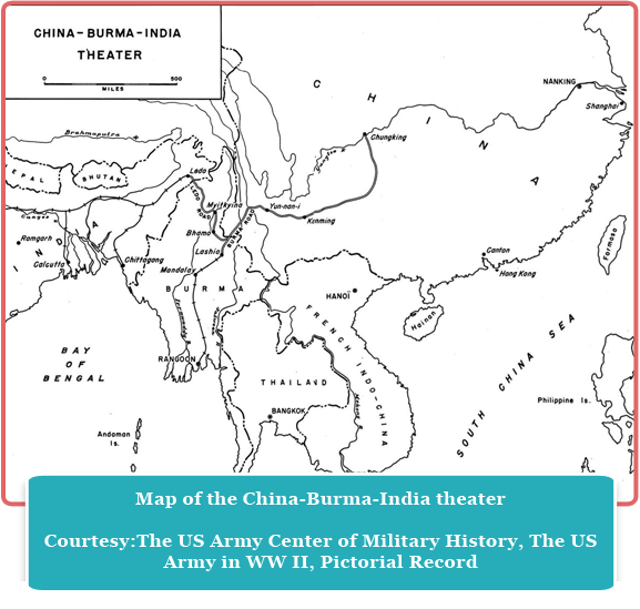 It wasn’t British soldiers alone who halted Japan’s advance into India in World War II. Rather, it was Indian soldiers fighting for the British Indian Army who contributed to the Japanese retreat.

Here’s a recap of the historic battles at Imphal and Kohima.

India’s role in the China-Burma-India (CBI) theatre during World War II is relatively unknown. The “China-Burma-India theatre” refers to the United States military’s operations in China, parts of south-east Asia, Burma and eastern India. The chief goal of the Americans and other Allies in the CBI theatre was to supply equipment, arms, fuel and food to Chiang Kai-Shek’s army. The Allies wanted to enable the Chinese Nationalist Army to fight against Japanese incursions into China and Burma. They hoped that a fortified China would fend off the Japanese in Asia while Britain and the Soviet Union focused on operations against Germany in Europe. India – especially parts of Assam, Manipur and Bengal – were the chief bases for the supply operations into Burma and China.

Most of the accomplishments in the CBI theatre were, therefore, logistical – building the 1000 mile long Ledo road from Ledo, Assam, to China; airlifting supplies over 15,000 feet high mountains in the Himalayas (“the hump”); and building a 2000 mile long fuel pipeline from India to China (all accomplished with the help of thousands of Indian labourers).

It was also in India, at the battles of Imphal and Kohima, fought 73 years ago in May, that the British Indian Army defeated the Japanese quite decisively, preventing them not only from advancing towards Delhi but also setting the stage for the Allied reconquest of Burma.

The army of about 120,000 personnel that fought these battles was composed largely of Indians, including the Gurkhas, and also Nepali Gurkhas. In total, nearly 2 million Indians fought world wide for the Allies in World War II. These soldiers came from all parts of India, including Garhwal, Rajasthan, Maharashtra, Punjab and Assam.

Out of a total of 49 infantry battalions in the CBI theatre, 16 were entirely composed of Gurkhas. In each Brigade (3-4 battalions made a unit) there was one British, one Gurkha, and one Indian battalion. Each division (three brigades made a division), was further supported by two British field artillery regiments and one Indian mountain artillery regiment. (The usual army structure is battalion -> brigade -> division.)

Upon Japan’s invasion of Burma in 1942, Imphal, the capital of Manipur, 70 miles west of Burma, became the destination for fleeing Burmese refugees. Over a hundred thousand Burmese refugees made it to Imphal and were rehabilitated in camps at the Koirengai airfield, now known as Imphal Main. Imphal itself was bombed starting in May 1942 and lasting until 1944. Many Manipuris had to evacuate their homes and villages as a result.

In March 1944, the Japanese launched the “U Go” offensive against the British that led to the Battles of Imphal and Kohima. The Japanese army advanced towards India to pre-empt a planned British invasion of Burma as well as make inroads into India. They intended to capture the British supply bases on the Imphal Plain and cut the road linking Dimapur (Nagaland) and Imphal at Kohima (Nagaland’s capital). With Imphal in their hands, the Japanese hoped to interrupt air supplies to China, gain control over it and establish a base from which to conduct further strikes against the British in India.

To accomplish these goals, the Japanese attacked Kohima on April 5, with 15,000 troops. The British Indian army in Kohima numbered only 1,500, and the Japanese were quickly able to isolate the city as intended.

However, they were prevented from taking over Indian and British food supplies and other munitions to keep their siege going by the fierce fight put by the Gurkha, Punjabi and Scottish regiments. With the help of ammunition dropped by air even though they were vastly outnumbered, the British Indian army was able to inflict enormous casualties and prevent the Japanese from advancing beyond Kohima. Once help in the form of additional battalions of Punjabis and Gurkhas arrived, the Japanese were pushed back from Kohima after bearing massive casualties.

Imphal too was besieged and surrounded by the Japanese. The siege of Imphal which started in March of 1944 continued until July but ended in victory for the British Indian army.

On 8 July 1944, the Japanese were given orders to retreat from Imphal into Burma. So fierce was the fight by Indians and other Allies that the Japanese lost 53,000 men (dead or missing) in all. The two battles turned the tide in the CBI theatre for the Allies, and the Japanese were eventually driven out of Burma as well.

The defeat at Imphal and Kohima was the biggest one that the Japanese faced in World War II upto that point.

is the editor of Jano (www.janoed.com), a new online history magazine for Asian Indian families.