Home  >  Spotlights  > Homeland Security  >  The war without an end

The war without an end 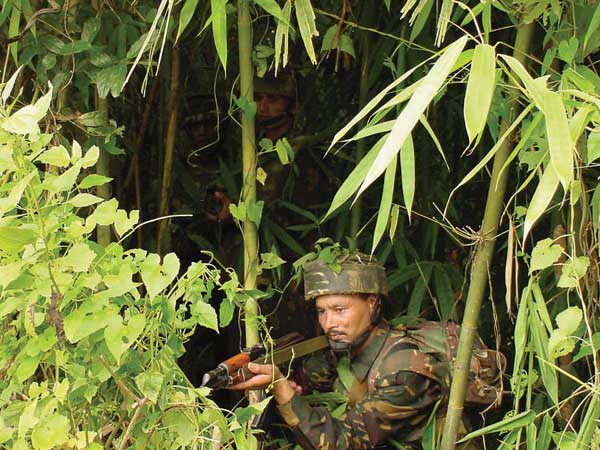 Insurgency has been independent India’s biggest curse where national integration is concerned. Given the vastness of the land and the remoteness of some of the border states, it wasn’t very surprising that differences should arise between them and the Union, due to the various irritants related to socio-cultural frictions, economic disparities and the like. And there were always negative elements that form part of every society, power-seekers and bigots, to exploit the situation to meet their selfish ends, their sinister designs invariably aided and abetted by the country’s unfriendly neighbours.

…the Punjab Insurgency has been the only one so far to have been successfully put down by a police force.

While the government is compelled to resort to use of military power whenever things get out of hand and the police and the para military forces can no more handle the situation (which happens far too often and in most cases in our country), it calls for the armed forces to perform in a manner that isn’t in conformity with their training and inclination. Whereas in a war a soldier’s role – to kill the enemy who is invariably a foreign national – is cut out for him, the counter-insurgency operations place restrictions on him which are tantamount to reducing his role to that of an armed police man. He is at a constant disadvantage, since the ‘enemy’ is never clearly identifiable from the rest of the citizenry which cannot be harmed. And even when identified, an insurgent, being an Indian citizen, is entitled to his rights and privileges which have to be respected. Such cumbersome activity, besides sapping the morale of the troops to the grave detriment of their combat potential, erodes the respectability of the armed forces among the civilian population.

Traditionally, Northeastern India has been the most insurgency-prone region of the country. The movements there, which began with the Naga and Mizo unrest that took roots in the nineteen fifties and sixties, have gone on to include the Manipuri and Bodo movements as well. While both Nagaland and Mizoram have shunned the insurgency and have joined the mainstream of Indian politics with regular general elections, some irritants still continue to impede a final solution in Nagaland. The Bodo and Manipuri troubles are still to show signs of an early settlement.

Insurgency did raise its ugly head, for a comparatively brief period though, in the prosperous state of Punjab too in the 1980s. Notwithstanding the two operations, ‘Blue star’ and ‘Black Thunder’, when the army was used to flush out the militants who took refuge in the Golden Temple at Amritsar, the Punjab Insurgency has been the only one so far to have been successfully put down by a police force. There is of course the ongoing Naxalite trouble in Andhra Pradesh and the neighbouring states, which is so far being handled by the police; but they have still not been able to see the last of the ‘People’s War Group’.

A decade and a half later, this proxy war sponsored by Pakistan still keeps bleeding the country white.

The last insurgency to have taken shape in India, and the most trying so far, has been the one in Kashmir, which began in early 1990s. A decade and a half later, this proxy war sponsored by Pakistan still keeps bleeding the country white. There is also an element of rabid cynicism that characterizes a Kashmir militant, a trait not often shared by his counterparts elsewhere in the country. For instance, in all fairness, it should be stated in praise of the Mizo and Naga militants, that throughout their insurgency, they have been maintaining a certain sense of honour and code of conduct. Even at the peak of hostilities, by and large, they had not been known to harm the civilian population, or for that matter, even the army ambulances. They fought the gentlemen’s fight, against armed soldiers.

The military option could never be the final answer to any insurgency. As a matter of fact, it could well be possible to find a peaceful solution to all Northeast insurgency – and most others as well – if only the government can put an end to the political exploitation, and make sure the economic benefits offered reaches the genuinely poor who, unfortunately form a huge chunk of the population in these areas even after more than half a century of independence. While the developmental measures should intrinsically form the part of any package to settle the Kashmir militancy as well, the situation would continue to defy a solution as long as Islamic fundamentalism rules the roost across the border. And the Indian Army will have to continue fighting this senseless war, which the common people, Indians, Pakistanis and Kashmiris, do not seem to be interested in anymore.

…Indian Army will have to continue fighting this senseless war, which the common people, Indians, Pakistanis and Kashmiris, do not seem to be interested in anymore.

Like most infantry regiments of the Indian Army over the years, the Madras Regiment too has borne its share of the burden of fighting insurgency with equanimity, with battalion after battalion doing their tenure in different areas. 2 Madras, which was inducted into Nagaland in early 1963, was the first battalion to get involved. 28 Madras earned accolades in June1981 for the operations in Phomching in Mon district, and later in June 1983 for apprehending a self-styled captain, Wungmattem Thangkhul. In early 1980s 16 Madras served in Mizoram. Quite a few officers and men of the Madras Regiment have been decorated for the CI operations in Nagaland. 433, 61 and 46 Field Companies of the Madras Sappers contributed enormously in improving the road communications in the early years of insurgency in Nagaland.

26 Madras was engaged in Operation Blue Star during the Punjab insurgency (5/6 June 1984). This suicidal mission, in which troops had to flush out diehard militants from their fortified hideouts within the Golden Temple Complex at Amritsar, cost the unit heavily in lives. Lieutenant Ram Prakash Roperia of the unit, who fell fighting the militants, was awarded the Ashoka Chakra – the highest gallantry award for an operation not against enemy – posthumously. 7 more personnel of the unit were decorated – 3 with Kirti Chakras and 4 with Shaurya Chakras – for this operation, 4 of them posthumously.

The details of the units which had been, or are being, engaged in Kashmir are not readily available. We do know that four Rashtriya Rifles units of the Madras Regiment are deployed in Kashmir. The record of the Madras troops, infantry, engineers, as well as others, wherever they have served in CI operations so far, remains one of cool courage and steadfast discipline under trying conditions, men often contributing cheerfully to the overall fraternization drive of the army to win over the populace, a measure which has often paid greater dividends than armed confrontation.

D P Ramachandran is a former cavalry officer of the Indian Army and a veteran of the 1971 Bangladesh War and author of the book Empire's First Soldiers.

2 thoughts on “The war without an end”