The Strategic Importance of the Siachen Glacier for India 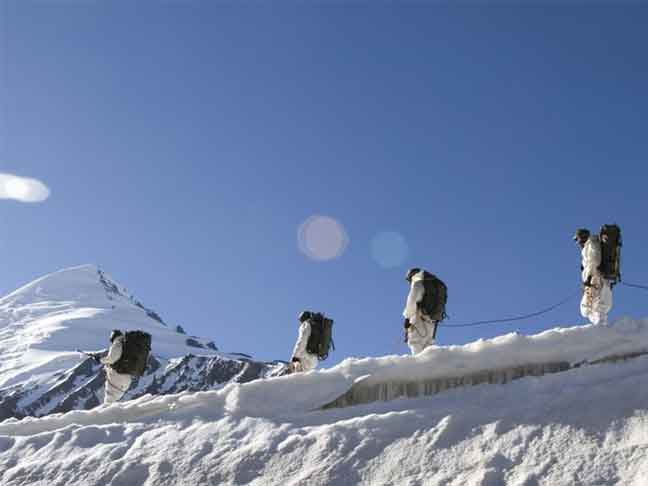 The death of nine army jawans belonging to the Madras regiment on the Indian side and the miraculous survival of one of the brave Indian soldier (who unfortunately died in hospital in Delhi) has once again prompted a debate on whether to demilitarize the glacier or to maintain the status quo. This article is an attempt to understand the strategic importance of the Siachen glacier for India and tries to make a scenario of what it means for  India in general and the people of Ladakh in particular if (in case) troops are withdrawn from the glacier?

The eastern Karakoram Range where the Indian interpretation of line beyond NJ9842 (where the Cease Fire Line and later Line of Control was terminated), effectively divides the Indian Kashmir and the Pakistan occupied Kashmir (PoK) is claimed by both India and Pakistan. The Indian troops have been deployed on the Siachen glacier since 1984 in a befitting reply to the deployment of the Pakistani army on the other side of the glacier. But India dominates the heights and thus is in a strategically advantageous position vis-à-vis Pakistan. A ceasefire has been holding since November 2003, and most of the deaths on both sides of the glacier have been due to the extreme climatic conditions on what has been dubbed as the ‘World’s highest battle field’. Both countries maintain permanent military personnel at the glacier at a height of over 7,000 metres and is a prime example of mountain warfare. For the Nubra valley, the main source of the Nubra River is through the melting of the glaciers waters which then joins the Shyok River. The Shyok River then ultimately joins the Indus River which finally winds to Pakistan and is important for both India and Pakistan. “The roots of the conflict over Siachen lie in the non-demarcation of the cease-fire line on the map beyond a map coordinate known as NJ9842. The 1949 Karachi agreement and the 1972 Simla Agreement presumed that it was not feasible for human habitation to survive north of NJ9842. Prior to 1984 neither India nor Pakistan had any permanent presence in the area”.[1]

Since the partition of India and Pakistan in 1947, the two counties have been embroiled in an unending and enduring conflict. The reasons of the conflict are many-fold for example water dispute, Kashmir issue, border dispute and so forth but the battle between these two countries on the heights of Siachen glacier has been a curious case for many in the strategic and international arena. Why will two countries spend a heavy sum on patrolling a glacier which has extreme sub-zero temperature with storms some time lasting for months and threat of natural calamities due to its heights? India controls the upper reaches of the glacier and is been maintaining the status quo since 1984. A withdrawal of troops from Siachen would be an incorrect move because it would send wrong singles to Rawalpindi which cannot be trusted with border incursions. History is witness to the attempts Pakistan has made to infiltrate, be it through the border areas with Jammu and Kashmir or the unsuccessful attempt to seize the  national highway, NH1 which is the life line of the Indian army to Leh and ultimately to Siachen. Whether it’s the Mumbai terror attacks or the recent attacks on the Pathankot air base, all the witness has been traced back to the Pakistani soil. Kargil war which was an attempt by the Pakistani army hand in glove with the terror outfits was an attempt to occupy the heights in Ladakh and then ultimately cut the supply line to the Indian army based in Ladakh. The memorial wall of operation Vijay in Drass sector is a reminder of the befitting fight fought by the Indian army to push the infiltrators back to the lower heights.  Therefore the unwillingness of the Indian army to withdraw from the heights stems from the fear that any step backward in the Siachen sector can bring the Pakistani position forward.

The loss of life and the revenue spent on occupying the glacier has often raised questions on the need to guard the frontiers along the tough terrains but the Indian government as well as army has always been firm on its decision to keep the army deployed. “There is no alternative to occupying Siachen and a withdrawal of troops is not contemplated”, Manohar Parrikar, Indian Defence Minister said and reiterated that a withdrawal of troops from the Siachen glacier would be an incorrect move.[2]

Army officers who have served on the glacier have many times argued that the Indian dominance of the heights at Siachen gives them leverage and is at an advantageous position compared to the Pakistani side. They further argue that until there is authentication of position from Pakistani side and a solution to the Kashmir dispute, withdrawal of troops is not feasible. Raising further doubts on the Pakistani intentions, Ramachandran in his write-up talks about how the first Indian expedition led by the renowned mountaineer Colonel N ‘Bull’ Kumar to Teram Kangri brought back indisputable evidence of the foreign expeditions entering the glacier from the Pakistani side. He further brings to light the fact that, “the army had also had evidence of an abortive attempt made by Pakistan in September-October 1983 to occupy passes west of the glacier.

Also he emphasises, “intelligence received in January 1984 of Pakistan’s large scale purchases of high altitude equipment removed whatever doubt there might have been of its intentions” (Ramachandran, 2015). Thus, the deployments of the army on the heights of Siachen have acted as a deterrent to keep away intruders from the other side. Also, Pakistan has close ties with China, which also shares border with India. China has been instrumental in building the Karakoram highway along with Pakistan and the sealing of the recent agreement on China-Pakistan Economic Corridor (CPEC) have also been factors of India keeping a strong foot in the glacier. India shares border issues with both Pakistan and China, so in order to revert back future Pak-Sino mutual attacks; India has to use its tactical strategy at the Siachen glacier to deter both Pakistan and China.

The Indian army was deployed in the State of Jammu and Kashmir in the year 1948 when intruders from the Pakistani side attempted to control the princely state of Kashmir. The result, intruders where pushed back and Kashmir was divided into two halves, the Indian side Kashmir and the Pakistan occupied Kashmir (PoK). Since then the Indian army has been looked upon as occupants and unwanted guests, especially by the people of Kashmir valley and share tumultuous relationship with them. But the mountain region of Ladakh has a different version of story as far their relationship with the Indian army is concerned.

The Ladakh region shares border with China as well as Pakistan and therefore of immense strategic importance for the Indian side. With Indian army making inroads to Ladakh to guard its border, the mountain region was thrown open to the outside world with better road connectivity. In order to patrol the border areas, Indian army built roads to the most inaccessible regions of the area which have immensely benefitted the locals.

Under the flagship of operation Sadbavana many schools and hospitals have been built by the Indian army which have been instrumental in the development of Ladakh. The army schools, Vidiyalas both in Leh and Kargil district are considered to be premium institutes where the children go through an all-round development. Children who crack the entrance tests in these schools are considered intelligent in their respective villages and the ex-students have most of the time brought laurels to the villages.

The Bema thang containment area which is a twenty minute drive from Kargil town is an example of the army’s sprawling presence in Ladakh. The school which also falls in the vicinity is a place of activities and a hub of students from far flung areas like Zanskar. The army hospitals are the lifeline for the people of Ladakh because of the dilapidated state of government hospitals in the region. The Indian army organise free medical check-up camps in far off and inaccessible villages which have won them love and respect from the locals.

Also, the Indian army employs the largest number of youth from Ladakh for its Ladakh Scouts Regiment. The Ladakh Scouts known as the “Ladakhi noonus” in the army circle (brother in local dialect) have been playing a vital role in patrolling the Siachen glacier. Specialized in mountain warfare they are also known as snow warriors or Snow tigers, given their capabilities to survive in extreme temperatures and climatic conditions. They played a significant role in the Kargil war of 1999 and where instrumental in bringing laurels to India. Colonel Sonam Wangchuk of the Ladakh Scouts was honoured with the Maha Vir Chakara, for his brave act during the Kargil war in pushing back the infiltrators. Every second household in Ladakh has a son employed in the Ladakh scout and it is considered to be an honour to be a part of this regiment.

There are so many folklores (of love stories, courage, bravery) surrounding the Siachen glacier, also known as Siachen-Kangri in Ladakh. Many songs are being composed revolving around the Siachen glacier. Also, the Indian army provide chopper services to the inaccessible places like Zanskar in the winter months when the road link is cut off due to heavy snow fall for almost seven months. In a scenario, (if ever) the army is deployed from the Siachen glacier it will have a bottom-down effect on various sectors of the Ladakh region. It will naturally mean exit and clamping down of army cantonment areas which will indirectly affect the whole societal fabric of the region, be it education, health, employment or the economy.

Demilitarization of the Siachen glacier has been hotly debated on both sides of India and Pakistan but neither side takes the first step. The whole Indo-Pak conflict is twisted in a complex web of issues and extraction of army, be it from Kashmir or the Siachen glacier sounds like a good idea but practically is not feasible for India. Until and unless Pakistan does not let its soil be used as a breeding ground for the terror outfits which particularly target India, there cannot be a solution to the India-Pakistan conundrum. The problem in Pakistan is that, the army muddles with the affair of the elected government. The Pakistani army has been touted to have links with terror outfits and the ISI (Inter Services Intelligence) as have been clear from the recent Pakistani-American terrorist David Headley[3]disclosures in connection to the Mumbai 26/11.  For the Indian side, maintaining the status quo at Siachen will proof to be a bargaining chip when in a conflict or war like situation. Although technologically India can further employ more advanced technology in order to avoid death tolls, but demilitarization cannot be the, solution in the near future. For the people of Ladakh Siachen glacier is the source of water and cutting down on troops from the glacier as well as the whole region will have detrimental effect on the whole region, in many possible ways.

is a PhD scholar at the school of international studies, Jawaharlal Nehru University working on the India-Pakistan relations.