Home  >  Spotlights  > Geopolitics  >  The Security Environment in and around India

The Security Environment in and around India 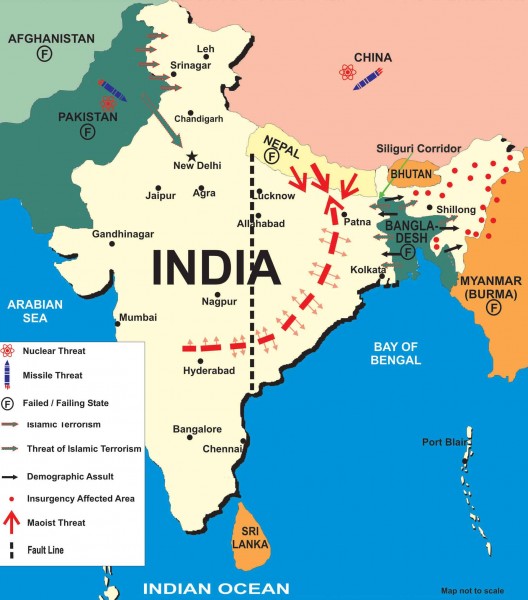 The gradual erosion of the political authority is evident in many parts of India, mainly due to poor governance and polarisation in society. There is unrest in society due to caste and religious problems. Confrontations between Muslim and Hindu fanatic groups within the country in the recent past are ominous signs directly impacting India’s internal security and composite culture.

Terrorist attacks from across the borders continue to pose a serious threat to us. India’s coastal security remains inadequate. A recent exercise held to check new security arrangements showed large gaps in the security grid. Exercise-enemy agents entered sensitive areas with arms similar to those used by Pakistani terrorists in the Mumbai attacks. It is obvious that coordination among various security elements has been lacking despite the lessons learnt after 26/11. Reports suggest that a lack of training and apathy were largely responsible various gaps being left in the security cordon despite the availability of new technologies. The new measures recommended to improve coastal security after 26/11 were not found in place during the recent alert exercises. Moreover, procurement of new boats and other equipment was found to be tardy and training facilities and proper coordination among various groups was still lacking. There is a tendency to not take corrective action, and when shortcomings are detected, many excuses and evasive answers are offered. On 31 July last year, Pavit, a Panama-flagged merchant ship abandoned by its crew, was found adrift near a highly sanitised Mumbai coast when it ran aground near Juhu beach.

This incident showed that even an unmanned ship that could have been loaded with tons of high explosives or even a radiation device could remain undetected for over 100 hours despite the navy, the coastguard, and the newly created marine police which guard our costal areas.

Kashmir has remained quiet since last year. There were no street agitations and only a few encounters. Terrorist activities and terrorist-related deaths were also the lowest in this period. This does not mean that the separatists have lost public support and that Pakistani terrorists no longer find shelter. This could be because of relentless pressure by security forces, Pakistani terrorists are on the run. It will be hasty to accept that terrorism and separatists have finally packed up; to verify the actual ground situation, we have to watch their activities in the Pakistan-occupied Kashmir (PoK) training camps, the number of terrorists in the state, the situation in Pakistan and Pakistan army’s future plans in Kashmir.

China’s influence has increased in Sri Lanka, Maldives and Nepal, where India’s influence was almost all-pervasive a few years ago.

It is necessary to look at the facts and figures published in this regard. According to a report in South Asia Intelligence Review, 34 civilians, 30 security force personnel and 119 terrorists were killed in 2011, a lower figure from 2010, when 36 civilians, 69 security force personnel and 270 terrorists were killed. Terrorism-related incidents were 189 in 2011, about a third of their number of 488 in 2010. According to the same report, by the end of 2011, Leh and Kargil, Jammu, Samba, Kathua, Reasi and Doda were completely free of militancy. Thirteen districts, according to the state home ministry, reported militancy-related incidents “in single digits.” These were Budgam, Kulgam, Anantnag, Shopian, Ganderbal, Bandipora, Kishtwar, Ramban, Doda, Poonch, Rajouri, Udhampur and Jammu. There were only few districts with a higher incidence of insurgency—Srinagar, Baramulla, Kupwara, Pulwama and Sopore, which remained the terrorist-extremist stronghold.

Many observers of Kashmir believe that the decline in militancy is because many groups have been eliminated and many top militant leaders were killed in 2011 by the army. But militancy does not stop for long because of elimination of top leaders, and we must look for much deeper causes for the decline in the terrorist activities. The targeted killing of several moderate political leaders and clerics, like Showkat Shah, and threats to Maulana Abdul Rashid Dawoodi in the valley are indications that terrorism is still supported by a large number of people in the state. According to various estimates, around 400 militants are still at large in the state, of which approximately 38 per cent are Pakistani-sponsored militants who have infiltrated and continue to find recruits among the youth in many parts of the state without much difficulty.1

State government reports suggest that the government has received an overwhelming response to its scheme of rehabilitation of surrendered militant youths. According to official sources, ‘it has received almost a thousand requests in response to its 23 November 2010 initiative for surrender and rehabilitation policy to lure back about 4,000 youths who may have crossed over for receiving training in various camps but were now at a loose end, being disenchanted of jihadi and Pakistani promises and looking for ways and means to return home and lead a normal life again’.

…chaotic conditions in Pakistan may, however, result in more terrorist attacks on India as people like Hafiz Saeed gain ground in a failing state.

Various government reports suggest that between 2,000 and 2,500 terrorists are located in various training camps in PoK and 900 to 1,000 militants are in readiness to cross over into J&K. If these estimates are correct, the danger is far from over. If only 500 to 600 foreign terrorists were considered sufficient by Pakistani sponsors in late 2010, why a sudden spurt in recruiting and requirement to train such large numbers? It is not yet clear what the Pakistani game plan is for approaching summer months and why Pakistan sponsors failed in the state last summer; was the infighting between various terrorist groups within Pakistan responsible for a pause in their operations? The larger number waiting to infiltrate J&K indicates they may have now overcome their difficulties and are planning a bigger campaign in 2012- 2013. According to reports, large sums have been pumped recently into the Valley ostensibly for relief and rehabilitation work. Of course, the money is meant mainly for financing the terrorist and fundamentalist network operating here.

More dangerous than terrorism is the programme or the movement to radicalise the moderate Muslims of the J&K and coax them to revolt against the secular government of the state. Fundamentalism and radicalisation programmes are being funded for inculcating Salafi Islamist ideologies and expanding radical institutions to boost the plans of civil disobedience in the name of Islam and for increasing the possibility of future unrest that may become too big for the state to handle. However if the news flow in the local news media is any indication, only normal political activities are taking place. More tourists than ever before are visiting the valley this summer. The calm, however, may be deceptive. Support to terrorism has not waned, though it is much less now.

The keys to defeating terrorism and controlling the fundamentalist tide are different. Pakistani-trained terrorists must be stopped at the border and LoC by the army or other security forces before they enter the state. This would require intelligence about their activities right from their camps in PoK to our borders, which are long and porous. We require appropriate technologies to keep track of them and their numbers and the arms they are bringing. The army is doing a good job of stopping infiltration but cannot totally seal the borders. They are still finding shelter on our soil. It will require a strong political movement that will eventually prevent their getting shelter in our territory. Countering the hidden agenda of introducing radicalism in J&K is a far more difficult task requiring a strong political will and support of important clerics to counter the elements that are spreading radicalism in the society.