The Rohingya Crisis in Myanmar: Options for India 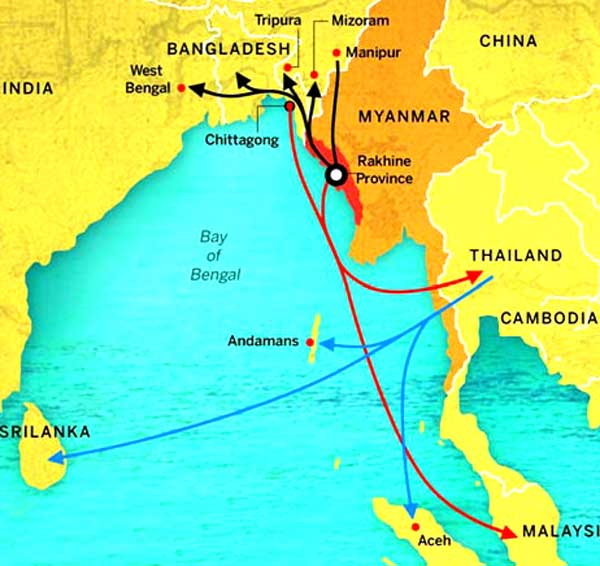 Ever since Rohingya Muslim militants killed 12 local persons in the Rakhine state of Myanmar on August 25, 2017, the situation in the country is highly volatile, with least 370 Rohingya having been killed by the Myanmar armed forces and a huge number of Rohingyas having moved to Bangladesh and other neighbouring countries.

The political conflict between the Muslim-dominated Rohingya community and the country’s majority Buddhist has continued for decades. However, the political conflict between the two groups suddenly changed into an armed struggle in 1982 when the Citizenship Act enacted by Burmese government did not recognise the Rohingyas as citizens and also prevented this community from holding any government office and moving freely. In 2012, Rohingyas burned the houses of Rakhine’s Buddhist and other ethnic communities, forcing the military to take punitive action against the Rohingyas. Though the massive victory for the National League for Democracy led by Aung San Suu Kyi in 2015 indicated the possibility of resolving the Rohingya issue, the attack by the Islamic terrorists on Burmese security forces in Maungdaw in October 2016 brought back violence in the region.

While there is no sign of an early end to the ongoing domestic turbulence in Myanmar, the United Nations and several countries have vehemently criticised the Myanmar government for its handling of the Rohingyas crisis. The United Nations has warned that 300,000 Rohingya could flee into Bangladesh.

India is also closely observing the situation in the country. Since the Indian government has always advocated the use of peaceful means to resolve the internal political turmoil between the Rohingyas Muslim minority community and the Myanmar government, it has also strongly condemned the Rohingyas militant attack on security forces in Rakhine and the attack by militants has forced the Modi government to consider deporting 40,000 illegal Rohingyas to Myanmar. The Indian parliamentary delegation led by Lok Sabha Speaker Sumitra Mahajan supported the Suu Kyi government by refusing to be part of the Bali Declaration at the World Parliamentary Forum on Sustainable Development. During Prime Minister Narendra Modi’s visit to Myanmar also, both the sides agreed that terrorism violated human rights and there should, therefore, be no glorification of terrorists as martyrs.

India’s focus on strengthening ties with Myanmar does not, however, lead us to believe that the Indian government has extended a blind eye to the Rohingya issue. In fact, while the Indian external affairs ministry has asked for restrain on the part of the Myanmar government to end the violence in Rakhine state, during his visit, Prime Minister Modi said that India would help Myanmar under the Rakhine State Development Programme.

Certainly, the Modi government has its own reasons to follow the middle path. While thousands of Rohingyas Muslims are staying in the different parts of India, there are increasing concerns about more illegal inflows of the Rohingyas through Bangladesh into the country and these Rohingyas refugees can be hired by the Islamic State to carry out terrorist attacks in India. Over the last three years the Modi government has invested huge political capital to foster deepening engagement with the Burmese government. With an elected democratic government under the de facto headship of Aung San Suu Kyi in Myanmar, it is natural for New Delhi to deepen relations with Naypyidaw to enhance its presence in the country. Sections of experts in New Delhi are also of the view that enhanced engagement with help improve India’s relations with Burmese military establishment, which continues to play a vital role in the domestic and foreign policies of Myanmar. The Modi government rightly feels that active support of Naypyidaw is very much needed for the success of its “the Look East Policy,” as Myanmar connects India to Southeast Asian countries including Lao and Thailand.

Since the 1990s China has made huge investment in the economy, defence infrastructure and other sectors of Myanmar, thereby assuming significant political influence in the country, India has needs to improve bilateral ties with this country to counter China’s rise. Myanmar is also viewed very crucial for the success of India’s various projects including Kaladan multimodal project, the Bay of Bengal Initiative for Multi-Sectoral Technical and Economic Cooperation (BIMSTEC) and the India-Myanmar-Thailand Asian Trilateral Highway India. India needs Myanmar’s help to eliminate the Naga ULFA militants in its northeast region. As Myanmar has huge oil and gas reserves, India has yet another reason to foster engagement with Myanmar. With Myanmar being an important member of the ASEAN, New Delhi sees engagement with Naypyidaw will fulfill India’s interests at this economically dynamic block. Thus, the Modi government has compelling security, strategic, economic and political interests in not allowing Rohingyas to enter the country and strengthening relations with the civilian government in Myanmar.

is an ICSSR Doctoral Fellow at the UGC Centre for Southern Asia Studies Programme at Pondicherry University.

One thought on “The Rohingya Crisis in Myanmar: Options for India”