The Doklam Standoff - Should India Project its Stand More Vigorously? 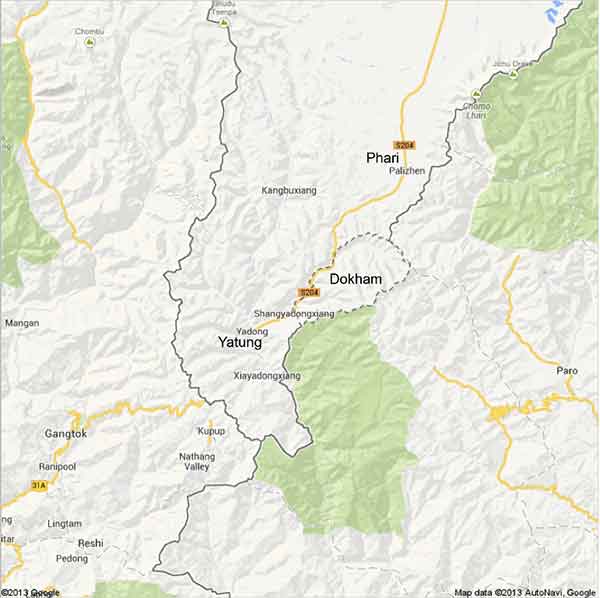 Two months have elapsed since the eruption of the eyeball-to-eyeball confrontation on the cold, deserted plateau of Doklam on the India Bhutan China tri-junction in the Sikkim sector. The standoff flared-up on 8 June, exactly the day Prime Minister Narendra Modi and President Xi Jinping were meeting in Astana, the capital of Kazakhstan, on the side-lines of the Shanghai Cooperation Organisation (SCO) Summit. At this meeting, held in a warm and cordial atmosphere, it was agreed that the two sides will not allow ”differences” between the two countries to transform into ”disputes”.

News of the Doklam stalemate hit the headlines around the end of June when Prime Minister Modi was in Washington DC for his first meeting with President Donald Trump on 26 June. It is not difficult to conceive that the timing of these developments was anything but coincidental!

In this short span of two months, much water has flowed in the Ganga and the Yangtze. It has been a psychological roller-coaster for the Indian public and media to be subjected to the unending tirade and spiel of vituperative expletives, threats and insults emanating from the Chinese communist party and state-controlled media as well as from spokespersons of the Chinese Foreign Office and the People’s Liberation Army. The Communist party controlled tabloid Global Times went so far as to call External Affairs Minister Sushma Swaraj ”a liar” for her Statement in Parliament on 20 July 2017 that all countries are with India on this issue.

The above sequence of events appears to be the Standard Operating Procedure (SOP) for China while dealing with countries with which it has differences, particularly those it considers to be weaker than itself. First, China encroaches upon the target country’s land or maritime territory and starts building heavy infrastructure on it, then lays claim to the territory on ”historical grounds”, next projects itself as a victim, and subsequently starts issuing threats to withdraw and succumb to demands. In most cases, China has been successful in achieving its objectives.

The most recent case is China’s gradual, sneaking intrusion into the South China Sea where it has successfully extended control over about 3.9 million square kilometres of maritime territory and constructed many artificial islands, notwithstanding the verdict by the International Court of justice against its claims.

China appears to have become increasingly aggressive as it has steadily risen in power and as the influence of the West has progressively declined. It seems to have been spurred by the ineffectual response of the international community, particularly the United States, on the South China Sea discord.

The Doklam standoff has emerged as a litmus test for India in terms of how resolutely it can stand up against an increasingly hegemonic China to protect the interests of Bhutan as well as its own interests. India is also sending out a message to other neighbours and countries around the world that India is not a country that can be pushed around by a belligerent China.

Bhutan has conducted itself in an exemplary manner. It has stood steadfast with India. Its support should not be taken for granted. India needs to engage Bhutan at every level on a continuing basis. This seems to be happening. One of China’s objectives seems to be to disrupt the special relations between India and Bhutan. To this end, senior officials from the Chinese Embassy in New Delhi have been visiting Thimphu and meeting leaders and officials at all levels. Elections next year to the Bhutanese Parliament also need to be watched carefully. China will try to get a Parliament elected which is more favourably inclined towards it than towards India. It is understandable that Bhutan does not wish to get embroiled in a muscular tussle between two neighbouring giants. But it also realizes that its interests – political, security, economic, cultural, and civilizational – are more intimately tied with India. Bhutan is the only other country, in addition to India, with which China has not settled its boundary out of the 14 countries with which it shares land borders. Like in the case of India, so also with Bhutan, China keeps the boundary dispute alive for applying pressure when it wants to.

While the salvoes from the Chinese side, particularly from the slander-mongering Global Timesand from the foreign office, have diminished somewhat in intensity and frequency in recent days, no change is visible in the tone of comments from China aimed at intimidating and coercing India to withdraw its forces.

In the most recent and most detailed volley yet, China issued a 15-page statement on 2 August 2017 slamming India’s stand and demanding “immediate and unconditional withdrawal”. It claims that it had “notified India in advance” of its plans to build a road in Doklam and also cited a “non-paper” reportedly presented by India during the 2006 Special Representatives border talks that said “both sides agree on the boundary alignment in the Sikkim sector.” It accuses India of using Bhutan ”as a pretext.” It warned that no country should ever underestimate the resolve of the Chinese government and people to defend China’s territorial sovereignty.” It rebutted India’s statement of 30 June and accused India of inventing various excuses to justify its illegal action.

India’s comments have been measured, reasonable, free of accusations and polemics. This has served India’s purpose well thus far. India has manitained that diplomacy and dilogue is the way to solve this issue. China has spurned this suggestion saying that dialogue can take place only after Indian troops have withdrawn. India has not thought it fit to respond to the substantive issues raised in the above Chinese Statement except to refute that the number of Indian troops has not come down from the earlier 400 to 40 as claimed. None of the other issues raised in the Note, for instance, that India had brought in two bull-dozers to the area, have been contradicted.

Some Indian analysts complain that the Indian media is meticulosly carrying all commentaries and statements from China and none from India. The ostensible reason for this is that barring the 30 June Press Release issued by the Ministry of External affairs and the External Affairs Minister’s statements to Parliament on 20 July and 3 August, there have been no formal or official statements from India. India needs to urgently address this shortcoming. It is recognised that a resolution of the issue has to be sought through quiet and behind the scenes dialogue. China, however, seems to be getting an undue advantage of moulding the public perception in its favour. The fact that India does not respond with facts and figures also gives the impression that India is not certain and confident of its position and has something to hide.

India’s publicity and public diplomacy efforts have been found wanting and inadequate. It is no one’s contention that India should enter into a tit-for-tat slanging match with the Chinese media or officialdom. But India’s public outreach instruments need to stay upfront to cogently and vigorously explain and rebut the calumny of falsehoods that China has been peddling. It is as necessary to reach out to the Indian populace as it is to inform the international policy makers and thought leaders on the accurate sequence of events.

India does not desire a conflict or confrontation with China. It would like a peaceful resolution to the issue so that status-quo ante of 16 June is restored. Reasons for China to maintain peaceful ties with India are also several, including its vulnerabilities in Tibet, preventing a reversal of established policy by India on Tibet and Taiwan, attractiveness of the Indian market, anxiety at India forging closer strategic ties with the US and Japan, and China’s need for a peaceful, non-threatening image in its aspiration for great power status.

Having been left with few viable choices because of its strident and offensive accusations, China might feel compelled to take some precipitate action against India. If such an eventuality were to play out, India should be prepared to fully protect its interests and in the process also avenge its defeat of 1962 and reclaim some of the prestige and credibility that it lost on that occasion. India has a fighting force which has been exposed to action on the ground incessantly over the last many decades. Chinese forces, in contrast, have not engaged in any armed conflict since the war with Vietnam in 1979.

From all available indications, it appears that the standoff on the cold, deserted plateau will not get sorted out anytime soon. It will be a long haul. India will have to psychologically and logistically be determined to dig in its heels to protect its security in the short and medium term and promote its strategic interests in the long term.