The Dirty Bomb: Jehadi Nuclear Threat from Pakistan- A Wake Up Call 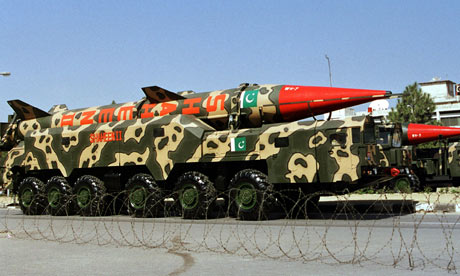 The fourth nuclear security conference held at Washington under the chairmanship of American President Barrack Obama and attended by heads of 50 countries including the Indian PM Shri Narendra Modi on 01 April, was definitely an eye opener for these leaders specially the live threat from the Jehadi Dirty Bomb. The item which made these world leaders sit up straight in their seats and gasp was the short film which showed jehadis flying a crop duster light aircraft spraying deadly radioactive material extracted from radiological equipment found all over the world causing horrific sickness and death among the citizens. However this is nothing to the type of threat India faces from the combination of state and non-state actors from Pakistan and their dirty bomb.

Pakistan has the world’s fastest growing nuclear stockpile. It also harbors the most dangerous jihadi groups. The real cause for worry for India are the jihadi groups…

Pakistan has the world’s fastest growing nuclear stockpile. It also harbors the most dangerous jihadi groups. The real cause for worry for India are the jihadi groups Lashkar-e-Toiba whose head is Hafiz Mohammad Saeed, the mastermind of the Mumbai attack of 26/11 and Jaish Mohammad (JeM) whose head – is the Maulana Azhar Masood the mastermind of the 2 Jan 16 Pathankot air base attack. Both these organizations are sponsored, paid, equipped and trained by the Pakistani Army and ISI to operate against India. In actual fact they are an extension of the Pakistani Army, the non-state actors to fight Indian army and spread terror in India. They have been doing this for last 25 years. They are the cheap option for Pakistan because their jehadis getting killed fighting Indian army are cannon fodder for Pakistani army but on Indian side the trained soldiers are getting killed.

Till date we have lost more than 5000 soldiers in this asymmetrical war.

Prime Minister Modi in this Conference in Washington has rightly said that “state actors working with nuclear traffickers and terrorists present the greatest threat.”In no uncertain terms what he meant was Pakistan and the threat is to us.

It needs to be remembered that in the past, nuclear scientist of Pakistan AQ Khan, had passed on nuclear secrets to Iran, North Korea and Libya. In other words Pakistan has a history of nuclear proliferation. Pakistans Strategic Plans Division which controls Pakistani nukes claim that they have 25000 troops to guard its nuclear stocks and facilities. However let us not forget that this Pakistani army is not the old Pakistani army.

Since seventies during the time of General Zia ul Haq Pakistani Army started recruiting their troops from the Madrasas. Today their officer corps and troops are highly radicalized. In all armies of the world after completing their training the officers and troops of that army take oath to protect their country. Not in Pakistan, here the Pakistani army takes oath to protect the Islam religion and not the country. In other words Pakistani army is an Islamic army and not that country’s army.

With 20 billion dollars business going (read Pakistani author Ayesha Siddiqa the book Military Inc: Inside Pakistan’s Military Economy) Pakistani Army is a political army which is well looked after. Its Corps Commanders in Pakistan are called Crore Commanders. Such political armies do not fight. Case in point is Operation Zrab-e-Ajab launched by Pakistani Army almost a year and half back on their own people in FATA region of Pakistan who have revolted against Pakistan. Pakistan has been using F-16 jet fighters, attack helicopters and heavy artillery against these people causing collateral damage. More than half a million people have become refugees here forced to live in pathetic conditions. Still end of this operation is nowhere in sight.

It is ok that Pakistan is building large arsenal of nuclear war head. These can be countered by Indian reciprocal buildup. However the real danger comes from the mini nukes (tactical nuclear warhead) which Pakistan is building in numbers. Pakistan is saying to the whole world that it is forced to build mini nukes because of the Indian war doctrine of cold start. This is a worthless argument because cold start which means Indian armed forces rolling into Pakistan within 24-48 hours without going into the long drawn process of mobilization is a non starter in the first place. This doctrine is nothing new and is being practiced by Israel since ages. Cold start is a conventional warfare doctrine which if Pakistan wants it can counter with conventional methods. Where do mini nukes come in? Instead of nixing this step of Pakistan in the bud the nuclear powers including US is soft on Pakistan. Recently while condemning Pakistan move to make mini nukes American president also equated it with the Indian Cold Start Doctrine concept. This gives Pakistan a reason to continue making more mini nukes.

The real threat to India is that Pakistani state actors may pass on this mini nuke device to their jihadi organizations pampered against India either the LeT or JeM to explode it within India and if caught will say that these jehadis stole it.

The real threat to India is that Pakistani state actors may pass on this mini nuke device to their jihadi organizations pampered against India either the L-e-T or JeM to explode it within India and if caught will say that these jehadis stole it. Alternately they can make available to these jehadis isotopes used in cancer treatment and blood transfusion .When these are packaged along with explosives and detonated in city Centre those in the immediate vicinity will be killed by the blast but the radioactive fallout will cause fatal radiation sickness to thousands. For years this area cannot be used. This will require large scale decontamination taking number of years. In truth this threat is very real and very dangerous for India which needs immediate counter measures without delay.

It has been reported that India has now realized that this friendship game with Pakistan will not do. So now they have already started strengthening our 2900 km long border fencing with Pakistan with high tech devices like CCTV cameras, thermal image and night vision devices, battle field surveillance devices, underground monitoring sensors and laser barricades with a total cost of 2900 corers. However these are all passive measures. They have to be mixed with offensive concepts.

What is most important is a firm message to Pakistan that if a dirty bomb goes up in India the fact that it was detonated by non-state actors will cut no ice with India. India will retaliate as if it has been attacked by a nuclear device by Pakistan. India will wipe out Pakistan come what may. So the onerous of safeguarding the mini nukes as also medical isotopes will be the responsibility of Pakistan. Similarly controlling the jehadis in the pay of Pakistan will also be of Pakistan. Meanwhile India must go all out to produce more Arihant type of nuclear powered submarines with short range nuclear capable missile Sagarika and 3000 km range Ballistic missile (Already tested twice) fitted on it. Two such submarines must always be on patrol duty in Arabian sea with Pakistan in range. It needs to be remembered that a nuclear submarine hiding deep is impossible to detect. It must be made clear to Pakistan that if they have mini nukes and dirty bomb we have Arihant ready to fire. Then scales become even .this will keep Pakistan away from mischief.

3 thoughts on “The Dirty Bomb: Jehadi Nuclear Threat from Pakistan- A Wake Up Call”