Rescue is one of the most challenging missions for a helicopter pilot. Often, the helicopter rescue crew has to face the vagaries of nature – altitude, high turbulent winds, intense clouding, rain / snow and poor visibility. Even one of these can prevent a rescue attempt. The pilot has to exhibit more-than-ordinary skills to reach the spot, rescue the people and return to safely. High Altitude mountain rescues – above 10000 ft (3000 m) are even more challenging. In such rescues the limitations and capability of the helicopter is also to be factored into the missions.

Civil rescues by the helicopters are documented in news reports or in various publications. However, military helicopter rescues are usually not documented, often forgotten and the civilian public very rarely gets to read about them. The following account is about one of these remarkable rescue missions carried out by the Indian Air Force on the Dhauladhar Ranges which going up to 19200 feet (5850 meters) having rugged, with projections of granite, slate limestones and sandstone with a 75˚ incline making it very difficult to climb / descent or landing of a helicopter. The crest and the mountain passes have snow all year round. This rescue was carried out at 14,500 ft (4420 m) near the Inderjot Pass north of the town of Dharamsala (Himachal Pradesh). 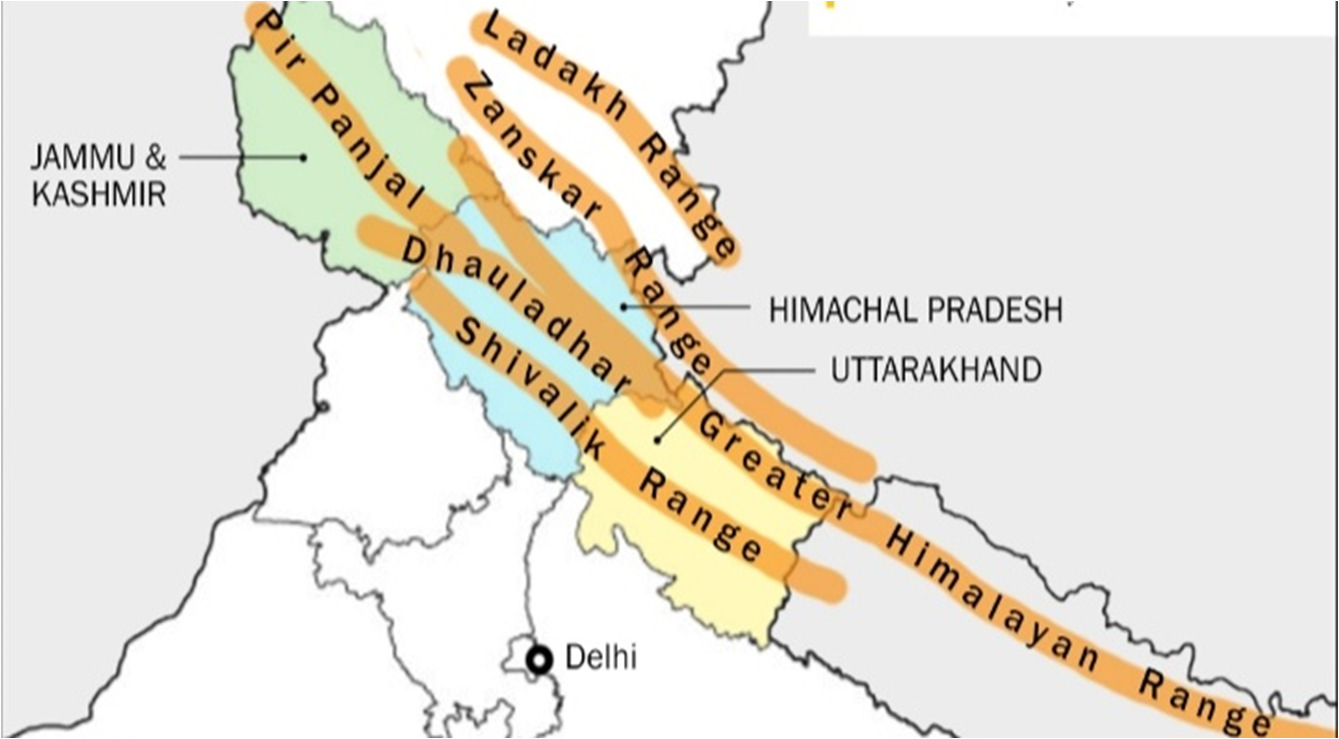 Sketch of the Dhauladhar Range

It was Thursday, 24th June, 1982. The Commanding Officer of the Indian Air Force 114 Helicopter Unit (114 HU) in Jammu, Wing Commander JS ‘King’ Kahlon, got an urgent message saying that nineteen Army personnel, on a routine patrol on the Dhauladhar mountains, had lost contact with their base at Yol since last four days. This message was given after working hours. The King sprang into action, picked up Flight Lieutenant BD Singh (BD -the senior-most bachelor living in the Officers Mess) and two more young pilots in the vicinity in his Willys Jeep. The four took off in two Chetak helicopters for the search and rescue (SAR) mission by 3 pm. They searched around the last ground position when the contact was lost but they could not sight the patrol. After almost two hours of search, they landed at the Army Division’s helipad at Yol. It was nearing sunset. King, along with BD in one helicopter decided to make another SAR attempt. An Army Officer, who was conversant with the probable route the patrol could have taken, was taken on board. Food rations, medicines and winter clothing were loaded into the helicopter too. The other helicopter was ferried back to base.

After scouring the mountains, almost at dusk, they spotted some human activity on a concave cliff from where members of the missing patrol were waving coloured clothes to catch the attention of the pilots. The group was huddled in a restricted space at 14500 ft AMSL. The helicopter managed to drop the rations and winter clothes quickly – two bundles rolled down the cliff and only one retrieved ­and headed back to the nearest Air Force base at Pathankot. They landed at night, refuelled and flew back to their base, Jammu. The search was successful – the rescue was to be the following day.

That night at 114 HU, the plan was discussed. The Chetak was not suitable for a winching operation. The Unit had two Cheetah helicopters that were better suited for high altitude winching operations. But these two Cheetahs were on a detachment at Srinagar and Leh! Message was sent to the Detachment Commander at 10 pm – Squadron Leader GS Bajwa (GS) -in Srinagar to take-off for Jammu at first-light next day, Friday, 25th June, 1982. There were 19 persons to be rescued – which meant 10 sorties from Yol. Only two people could be winched up and brought to safety per sortie. Refuelling at Yol was planned – a refueler was despatched to Yol from the Air Force base at Pathankot during the early hours of

25th June, 1982 -after every three sorties, and it was estimated that the rescue mission would be complete by 3 pm, weather willing!

The Cheetah arrived at Jammu and BD took over the Cheetah helicopter with GS as his co-pilot. The Co-Pilot seat was turned around facing the passenger cabin to facilitate Winching Operations. Also onboard was Sergeant (Sgt) B Singh – he was to be winched down at the spot to help the personnel with the winch to be hoisted up. The rough sketch of the rescue location from Yol / Dharamsala is below. 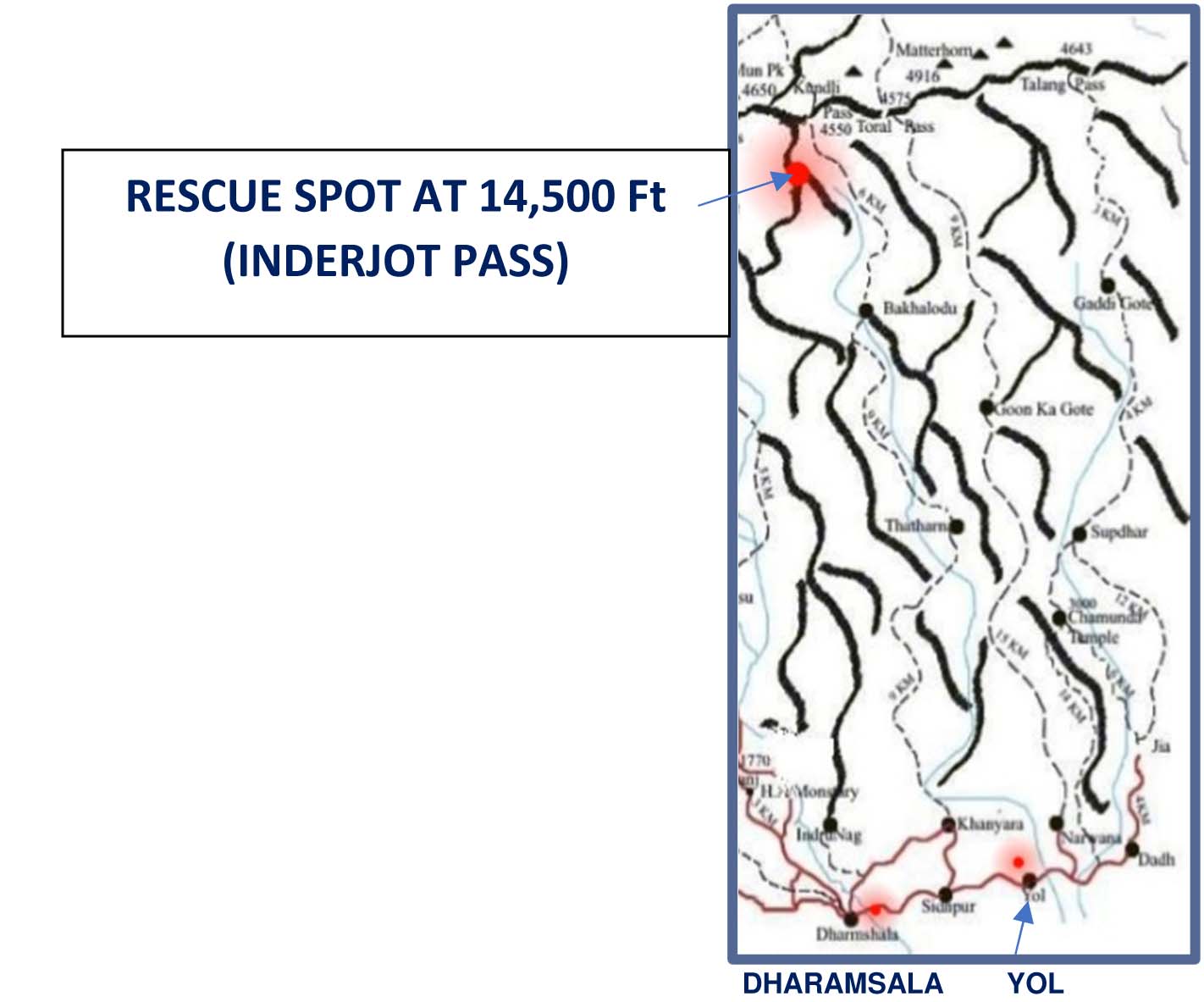 It was fair weather though the winds were picking up. The Cheetah reached the site. The Sergeant was lowered and he started loading the soldiers, one at a time. BD was on the controls while GS was operating the winch. The site was, as mentioned before, a concave cliff. The hover was established with the rotors less than 10 m away from the cliff wall – just enough to lower the winch cable. It was very challenging to maintain a steady hover despite fair weather. The first seven sorties were smooth and 14 personnel who were rescued were dropped in Yol by 2 pm. Meanwhile, massive clouds had gathered and, as luck would have it, the clouding was just over the rescue location. In the sixth sortie, the winds picked up to more than 40 Knots and by the seventh, it began to rain. The visibility started reducing and BD halted the operations and postponed the eighth sortie till the weather cleared. It was a tense wait at Yol. 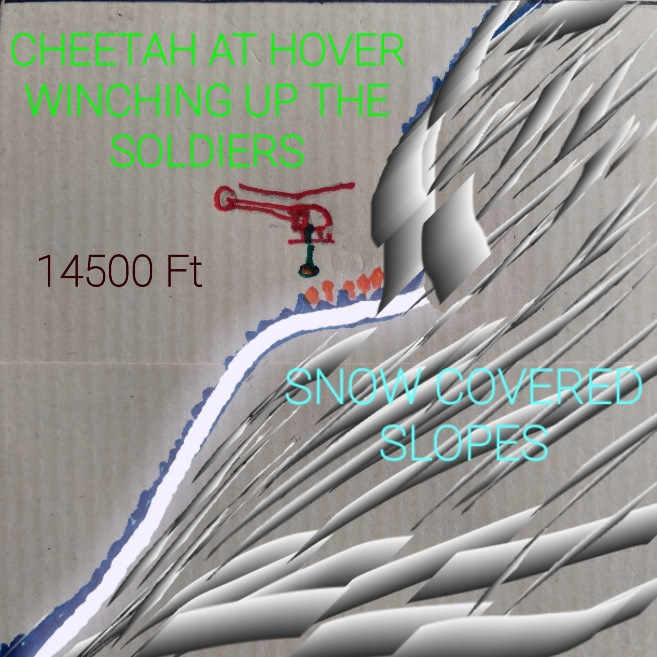 A Rough Sketch of the Rescue

Finally, by 4 pm, there was a window and the helicopter took off. It was turbulent and the winds were gusty. Fresh snow had fallen and the clouds around the site were stagnant. As they approached the site, the visibility had dropped to 100 m. BD, having come so far, took a chance to hoist up two more personnel. It was pure professional skill that combatted the turbulence and poor visibility as he managed to hover steady and rescued two more personnel and took them to Yol. With 4 (3 + the Sergeant) more to be lifted, time was running out. More dark clouds had covered the Dhauladhar range. Daylight was also diminishing.

Fortune favours brave, and BD and GS persisted. The ninth trip was like the previous one – turbulent and with poor visibility. Added to this was the reducing daylight. BD picked up No 17 and 18 and decided to land at a civilian ground in Dharmsala instead of Yol. This gave him an extra 10 minutes in failing light. It was a race against time. The last sortie had a prolonged hover with the winch cable lowered. The last army man was the leader of the patrol – a Junior Commissioned Officer (JCO). An argument followed between the JCO and the Sgt as to who will be the last to be winched up! The Sgt said he was there to ensure that the last man is winched up – the JCO differed saying, as being the Senior of the two he should be the last to be evacuated from the site. The pilot did not know this – they only knew that they were hovering and there was this delay. Finally, the Sgt capitulated and was winched up followed by the JCO. BD and GS rushed back to Dharmsala picked up the two other rescued people they had left behind there and safely flew to Yol. It was dusk before they took-off again, this time back to Jammu. Mission accomplished!

This writer was in Jammu when BD, GS and the Sgt landed back in Jammu at 7-30 pm. BD narrated the complete episode to Sqn Ldr SK Dixit who, in turn asked this writer, as his understudy, to draft a citation. Flt Lt BD Singh was decorated with Shaurya Chakra (Citation below) while Sqn Ldr GS Bajwa was commended by the Chief of the Air Staff.

Such rescues are challenging and often carried out in high altitudes in mountains and in bad weather. This particular mission rescued 19 people in a single day in a single-engine helicopter at the same site – probably a record of sorts. It was a testimony of the dedication, professional skill and the chutzpah of the Indian Air Force helicopter pilots. 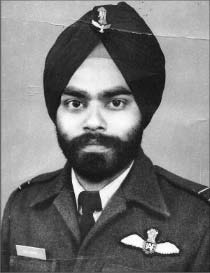 On the 24th June, 1982, information was received about 19 Army personnel had been stranded near INDRAJOT PASS north of DHARMSALA. A rescue aircraft was launched and it was found that the personnel were on a rock at a height of 14500 ft AMSL and on the mountain side with a gradient of 75. The personnel were surrounded by nearly 10 feet of fresh snow. It was appreciated that no landing could be attempted and winching operation will be required to rescue the personnel. Food, medicines and blankets were dropped at the site and the aircraft returned to base late in the evening. On the 25th June, 1982, Flight Lieutenant Bikram Dev Singh, Flying (Pilot) was detailed to commence rescue operation in Cheetah aircraft fitted with rescue hoist. He reached the site at about 0900 hours. The weather at that time was fair but the wind speeds were of the order of about 40 knots. After a through recce the aircraft was brought to hover 15′ above the stranded personnel. Because of the very steep incline and location of personnel, the aircraft had to be hovered leaving very small margin between the rotor and cliff side. Hovering under such conditions of high altitude, strong winds and very difficult terrain is a nightmarish task requiring exceptional skills. The helper was lowered at the site and two Army personnel were hoisted up and taken to YOL. On returning to the site, it was found that the weather had sharply deteriorated. Clouds had rolled in over the area, the visibility had dropped to 100 metres and wind speed had picked up to about 50 to 55 knots. Flt Lt Bikram Dev Singh continued the rescue operation with cool professionalism and in two more trips evacuated in all six personnel. By 1730 hours all stranded personnel had been brought to YOL.

One thought on “The Dhauladhar Saga – A Mercy Mission”