Structural integrity of very high order has been provided through robust hull structure, ample water tight sections and fire zones, special fire insulation and smoke clearing arrangements. Expansion joints are specially designed in a manner that the forward superstructure and the after superstructure are welded to the hull and the middle superstructure is suspended on bulkheads, giving freedom to the main hull to flex and allow expansion of main hull girder. This reduces stress on structure.

Habitability: Modular accommodation, totally air conditioned has been provided. Even the galley is air conditioned through separate dedicated ATUs. The automated galley will enable the crew to be fed with Indian, Continental and Asian gourmet meals including freshly baked bread, Dosas and chapattis.

The TACS – total atmospheric control – filters and controls the temperature and humidity of the air coming into the ship at all times. It removes any radioactive, chemical or biological impurities thereby protecting the crew and systems even during nuclear attack. All the air is taken through AFUs – air filtration units and there are no mushroom heads on the top deck. Three numbers citadels have been provided which are user friendly and easier to maintain. Decontamination facilities have been provided on board.

Project 17 Frigates have been provided with accommodation for women naval officers serving on board. Their cabin has attached bathroom, bigger wardrobe space and located near the captains suite.

Shivalik has come out as a potent warship, as good if not better than any other advanced modern naval frigate in the world. The Indian Navy has thus displayed their capability in design and building of a new generation stealth frigate with futuristic technologies. These include integrated stealth, lethal payload with advanced CAIO, modern fuel efficient CODOG propulsion with state of the art IPMS, ATM based integrated ship borne data network – AISDN, third generation CCS and IVCS, total atmospheric control TACS. 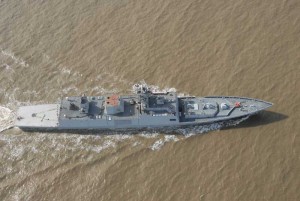 The lines of the ship and form parameters have been so optimally evolved for most superior hydrodynamic, sea keeping, manoeuvrability and handling performance demonstrated successfully at sea during trials. Shivalik has turned out to be an ideal, versatile and stable naval platform with minimal ship motions and minimal vibrations for naval warfare. CODOG propulsion plant offers simplicity and reliability in operations with higher endurance ranges and as most economical in fuel consumption. The above state of the art and futuristic technologies have been the pride of very few select nations like USA, UK, France, Germany, Netherlands and Italy.

India is now a proud member of this exclusive club with cutting edge warship technology. It needs to be emphasised that the Project 17 stealth frigate design is totally indigenous evolved ab-initio by the Indian Navy. Some reports in the media mention, Shivalik design having been derived from a foreign acquired ship. These are incorrect reports. Instead some of the features of Project 17 had been incorporated in the acquired ships during negotiations.

The success of Shivalik indigenous design can be attributed to various factors like continuity of the key officers directing the design, Government sanction for completing the design before the sanction for building the ships, democratic and transparent manner of working amongst design, staff and professional directorates, liberal communications and involvement with industry.

The follow-on ships of Project 17A will see refinements in design based on experience gained and lessons learnt in Project 17, design. Future ship design and construction will be influenced by advances in both manufacturing techniques and technologies, along with improvements in the ship design environment, resulting from greater use of computer base data bases and graphic tools. The next generation digital shipbuilding will simulate and optimise the entire shipbuilding life cycle process in a virtual environment from the initial development to delivery. This will increase productivity, reduce costs, improve quality in warship building.