Over ground workers (OGWs) have always been the mainstay for an insurgency movement. Previously, OGWs were primarily involved in logistics support and intelligence gathering. Of late the distinction has blurred considerably with OGW also capable of carrying out small scale strikes while retaining the capability to mix rapidly with the population. OGWs also become a significant tool for strategic communication and recruitment by their handlers in J&K. It is a well-known fact that OGWs can constantly work towards the development of a negative sentiment in the minds of the so-called grey population or fence sitters in an insurgency.

Resource Control and its Flip Side

Resource control measures including establishing check points, Cordon and Search operations create a sense of alienation in the minds of the populace. On the other hand, the comparative freedom of movement available to terrorists due to limited resource control measures, emboldens the terrorists to change their strategy by trying to mix up with the population. The attack by Pakistani terrorists at Sunjuwan gives this clear impression that the group had infiltrated months ago and were assisted by OGWs.[i] Movement without weapons or with a pistol has thus become the order of the day. Thus, a present-day terrorist may not be easy to identify and would operate in the grey area between that of an OGW and terrorist.

In the Kashmir valley, there is an adequate pool of disgruntled unemployed youth both educated and uneducated for recruitment by anti-national elements. Radicalisation seems to be the first step for gradually bringing the youth into the main line of militant actions. Typically, a strategy of systematic entrapment is employed whereby individuals are instructed to undertake operations that are progressively more serious in nature. The objective is two-fold: first, to induce inductees to greater acts of disobedience and violence and second, to slowly distance these individuals from mainstream civil society to the point that they have no real option but to remain with the militants. The individuals booked under Public Safety Act (PSA) of J&K and who spend time in jails with hard core, terrorists provide an ideal breeding ground for potential recruits. In most cases, the procedure seems to follow a standard pattern that starts out with youth being used to target SF via stone pelting for money, progressing through more serious vandalism and then being an OGW wherein he provides logistical support for strike teams. The more resilient and motivated youth are then assigned jobs of more serious nature like grenade throwing and snatching of weapon before they join the main stream groups for more serious actions. Thus, are the immediate solutions of today in the form of bookings of youth under PSA the problems of tomorrow? 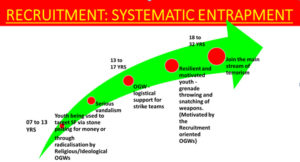 Effect of Sense of Alienation/ Isolation

As a sense of alienation increases the support for the grey population (separatists & OGWs) increases, who in turn are able to influence the perception of people more adversely. Adverse perception further alienates the people and vice versa.  This is a mutually reinforcing loop and a vicious cycle which needs to be broken, otherwise, the recruiters of terrorism will never find a dearth for new foot soldiers to further their cause.

The Jammu and Kashmir police are revising the list of suspected over-ground workers (OGWs) of militants and have called many of them for questioning in all districts as part of their efforts to cut the support network of militants and freeze their movement.

All district headquarters have been asked to update the list of suspected OGWs and call them for questioning, if needed, to get an update on the militant network. Names of over 270 locals, suspected to be OGWs, have been circulated to all the district SPs in the Valley to get the latest information on them. Police have already started picking up youth during night raids in Pulwama, Shopian and Kulgam districts of south Kashmir. In the last week of August, 12 youth were detained during raids across Pulwama in a single night.[ii] But the moot point is that, does such action provide the required impetus to anti-terror and counter terror operations in the Valley?

To fight this most important tool of terrorism and proxy war it is important to categorise the OGWs so that separate response strategies can be made for each one of the categories. Although operating as larger network, the OGWs in Kashmir can be broadly categorised under the following heads (the categorisation has been done on the basis of experience of the author who has carried out a net assessment and system analysis study on the security situation in Kashmir, in order to give a de- novo look at the issue of OGWs by categorizing them for the sake of strategic communication and perception management/improvement): –

OGWLS and OGWF are easy to identify as these can be caught in the act during a counter terror operation or by intelligence agencies tracking cyber funding and physical currency as funds for terror. The National Investigative Agency (NIA) in early February this year had established links between terrorists, Hurriyat and stone-pelters, tracking the flow of funds, which led to charge sheeting.[iii] More recently on 30 August 2018, Syed Saluddin’s son, Shakeel was arrested by NIA for funding of terrorist activities through Hawala racquet.[iv] Their capture and later indicting is not questioned by the populace to a large extent as they are caught in the act with a trail behind them.

OGWIS, OGWRS and OGWR can be grouped together for the purpose of response strategies. These workers are omnipresent in all walks of life. They could be sympathisers, belong to families of killed militants, teachers, religious teachers, separatists, members of larger networks like Al-Quaeda or of-shoots of ISIS ideology, Pakistani proxy war agents or even disgruntled elements of society. Though these workers look benign in the face of it, they are the most dangerous to society as well as the security forces. They make their presence felt in all walks of life including the funeral processions of killed militants. Merely picking them up in night raids will only alienate the society further. On the contrary, launching intelligence-based sting operations over a period of time, gathering proof of their damaging activities of recruiting, radicalising or merely pushing the youth into militancy by handing them over guns, will expose them in the eyes of the Awaam. This proof will not only be useful for convicting these elements but also form a tool for strategic communication with the Awaam, showing them how their children are being misled for an unjust cause. Long drawn out stake-outs will garner richer dividends as against perceived arbitrary arrests.

The last category is that of OGWPS who are the fence sitters and they are just keeping the pot boiling by creating an atmosphere of fear, dejection and helplessness in the youth. These are again omnipresent and cannot be targeted merely on hearsay, due to their democratic and constitutional rights of protest and liberty of expression. An endeavour to change their mind set through Psychological and social rehabilitation as well as strategic communication could be an answer to bring them back into the mainstream.

There is definitely a need to jointly map the OGWs, terrorists and anti-national elements through a multi-agency effort so that the intelligence picture generated is in sync with ground realities and not based on perceptions of various agencies. Due care should also be taken to ensure that police gets the credit for any operation launched based on joint intelligence as their empowerment, in the long run, will be beneficial. The PSA provides an ideal tool to book anti national elements and OGWs to prevent them from disrupting peace and security. However, care should be taken to ensure that only hard core OGW are booked under this act. Random booking of youths under this act completely eliminates an individual’s chance to come back to society and thus would be readily available to the terrorists for indoctrination. Further, the time spent in jails should also be monitored so as to prevent them from interacting with hard core terrorists and fundamentalists. Remember that the Perception and Psyche of the Awaam is the key to the solution of the problem and highest standards of propriety and well thought out strategic communication for the different categories of the OGWs will separate the fish from the pond.