QUAD: Is India really the weakest link in the US-led alliance? 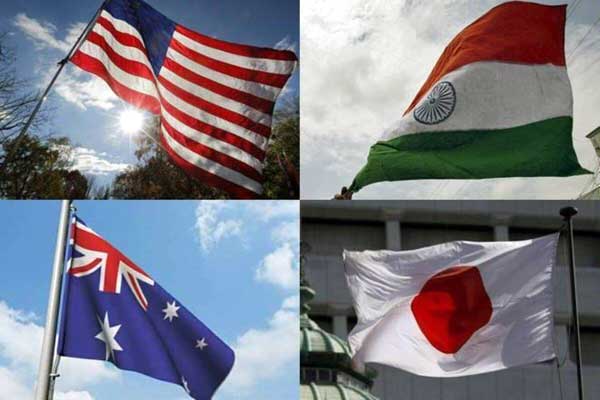 Japanese leader Shinzo Abe pioneered the idea of Quad more than a decade ago. In December 2017, President Trump toyed with the idea of reviving Quad 2.0 as a “trump card” to counter China in SCS. Biden administration gave the concept concrete shape at the four-nation virtual leadership summit last March. “Quad” was first laughed at in Beijing as a “beggar’s club,” then denounced as Cold War mindset. Analysts globally, especially in Beijing, have been describing India as the outlier among the four nations. Is India really the weakest link or the country will eventually become the keystone in the quartet?

What is in a name? The famous phrase was used by Shakespeare in his play Romeo and Juliet. We don’t know if the bard is more popular in Japan than in China. What we do know is that Shakespeare is the most popular and most read and staged foreign literary figure in the People’s Republic. If so, it is possible to argue the Chinese understand what is the meaning behind changing Japanese notional concept “free and open Indo-Pacific”? Just like the other notional concept Quad. Let us first briefly talk about “free and open Indo-Pacific.”

In October 2020, while addressing the Diet, Japan’s parliament, the new Prime Minister Yoshihide Suga borrowed a foreign policy concept from predecessor Shinzo Abe. The concept, originally called the “free and open Indo-Pacific strategy” was first articulated by Abe in 2016. The idea had received full backing from the US. Though Abe claimed the concept was aimed at realizing regional cooperation on security and economic growth, Beijing was not fooled by its real purpose i.e. a counterweight to China’s Belt and Road regional infrastructure initiative. However, perhaps disappointed that President Trump – a leader known for poor or no foreign policy vision – was not lending the expected support, Abe chose to adopt a softer line on China and in 2018 dropped the word “strategy” and replaced it with “vision.”

Further, as observed by Nikkei Asia’s Shunsuke Shigeta, while Abe hoped the use of the word “vision” might bring on board the ASEAN nations that had been long worried about pressure from Beijing, Suga in his speech went a step further and dropped “vision” altogether. A few days later, in a speech he delivered in Vietnam on his maiden visit abroad, Suga once again did not use “strategy” or “vision,” and reiterated “free and open Indo-Pacific.” According to Shigeta, the new prime minister was trying to appease Beijing which had earlier accused Suga “of building an Indo-Pacific NATO aimed at containing China.”  However, the actual reason why Suga invoked Abe’s concept but minus “vision” was his attempting to appear to be “more balanced towards Beijing and Washington.”

But dismissing Suga as a leader with no foreign policy experience, and at the same time relying upon its thorough grasp of Shakespearean phrase “what is there in the name,” Beijing was too clever to be consumed by the face value of Suga’s plain and simple coinage “free and open Indo-Pacific.” By dropping “vision” Suga intended to show [to Beijing] that the idea was a mere “geographical concept” and not a geopolitical one. But both China’s foreign policy makers and Tokyo watchers have been consistent in interpreting the Abe-Suga framework as Japan’s strategy to contain China. Just three days before Suga held his first press conference overseas in Jakarta, a Chinese commentary described the new Japanese leader’s Indo-Pacific objective as “a strategy to walk in step with the United States and deepen confrontation in the region.”

It is in this above backdrop, what does Quad mean for the Indo-Pacific must be understood.

Foreign policy makers, diplomats, academia and media in all four Quad nations welcomed the 12 March US-Japan-India-Australia summit as “dramatic leap forward for the ‘Quad’ and one of the most significant developments in the Indo-Pacific security architecture in recent years.” (Emphasis added). Citing the US National Security Advisor Jack Sullivan, widely circulated The Diplomat not only called the 12 March virtual summit “historic,” it applauded President Biden’s unexpected embracing of “free and open Indo-Pacific” nomenclature. “Biden’s enthusiastic initiative to hold Quad heads-of-state summit is contrary to apprehensions that the new president would choose a softer line toward China which will exercise a downstream effect leading to Indo-Pacific construct losing salience for the new US administration,” the news magazine noted.

Now, with regards to questions such as is Quad still fragile and within its frail frame is India the outlier, let us recall it was Australia and not India who “killed” Quad 1.0 under Prime Minister Kevin Rudd in 2008. According to defence analyst David Grossman, the first attempt at the Quad died on the vine because “Australia withdrew over concerns that the Quad needlessly antagonized China.” Writing in July 2018, Grossman pithily singled out India as seemingly least enthusiastic among the four countries toward Quad 2.0.

Furthermore and arguably, the following factors have been most discussed for India’s so-called “getting cold feet” on Quad 2.0: the Wuhan summit in April 2018; a day after Xi-Modi friendly get together in Wuhan, India rejecting Australia’s request to participate in Malabar military exercises along with the US and Japan; in the same year in June, Prime Minister Modi delivered keynote speech at the Shangri-La Dialogue in Singapore in which “he declined the opportunity” to invoke the Quad; a week later Modi attended the Shanghai Cooperation Organization summit in Qingdao, China – for the first time as official member of the regional group – and India signed the Qingdao Declaration; last but not the least, a month after returning from Qingdao, in July, India used the second opportunity of maritime dialogue in New Delhi with Beijing and emphasized ASEAN and not Quad should be central to the Indo-Pacific.

But as they say, this was then. Three “long” years have passed since what can be called “the golden year” in India-China bilateral relations in the past decade. Currently, as India is observing the first anniversary of “Galwan Martyrs,” looking back, the year 2018 seemed a “lull before the storm.” Even before Coronavirus fundamentally changed our world, also much before the border skirmishes starting last year in May and snowballing into ongoing, unresolved standoff in Ladakh, the revocation of Article 370 in Jammu and Kashmir in August 2019 had turned into the most serious issue between the two sides since the 2018 informal Wuhan summit. Though China kept under wraps until the last hour before Xi landed in Chennai for the second informal summit with Modi, the latest friction arising out of the abrogation of Article 370 had put to test the Wuhan Consensus, i.e., as Suhasini Haidar of The Hindu put it: “differences don’t turn into disputes.”

Although the atmosphere was filled with euphoria during the two-day second informal Modi-Xi summit in Chennai in as many years, no one can deny the two leaders “eschewed confrontation for the sake of plodding along.” A week after Xi’s departure, the Indian media generally summed up the informal summit by saying there was an emphasis on optics than substance. But speaking of the Quad, the strong Chinese reaction to the elevation of the status of Ladakh to the Union Territory of India ensured “the lustre of the Wuhan process” was beginning to fade away. Besides, India also became proactively engaged in the upgrading of the Quad to the foreign ministers level at the sidelines of the UNGA in New York, just weeks before Mamllapuram summit.

One thought on “QUAD: Is India really the weakest link in the US-led alliance?”