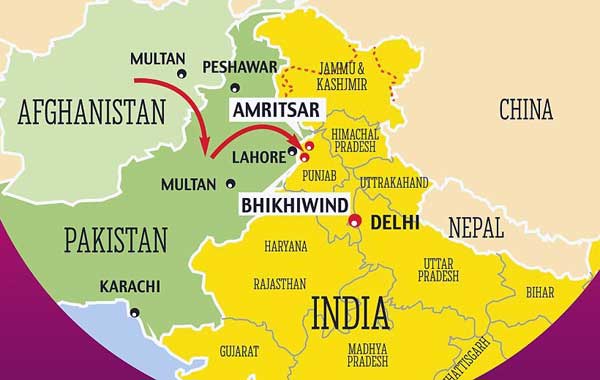 Punjab, for many years, has been a transit point for drugs from Afghanistan. The drug money has become a major source of funding of elections in Punjab and over the time a well-organized drug cartel has come into existence with active connivance of politicians, police officers and drug lords. This drug money is used in financing militancy. To check militancy we will also have to control the drug problem.

The NIA probing the attack learned from the Gurdaspur (Headquarter) Superintendent of Police Salwinder Singh after interrogations that he got paid in diamonds for every drug consignment smuggled across the border.

On the night of 31 December 2015, four men hijacked a multi-utility vehicle belonging to Salwinder Singh, a superintendent of the Punjab Police, in Dinanagar. In the process, they slit the throat of his jeweler friend Rajesh Kumar, who was later admitted to a hospital. The vehicle was found abandoned about 500 meters away from the airbase. On 2 January 2016, a heavily armed group attacked the Pathankot Air Force Station, part of the Western Air Command of the Indian Air Force.

The National Investigation Agency probing the attack learned from the Gurdaspur (Headquarter) Superintendent of Police Salwinder Singh after interrogations that he got paid in diamonds for every drug consignment smuggled across the border. Singh’s jeweler friend Rajesh Verma would accompany him to his clandestine trips so that he could verify the authenticity of the stones. Verma is reported to have made such clandestine trip to the Peer Baba mazaar in Taloor village under Narot Jaimal Singh police station twice in the span of 12 hours on 31 December, along with his cook Madan Gopal and jeweler friend Rajesh Verma. The shrine is located a few kilometers from Bamiyal, the village from where the terrorists were suspected to have infiltrated into India before mounting the attack. It was Verma whose throat the terrorists slit open to send him to paradise (isko jannat pahuncha do), which he luckily survived. Investigations have also revealed that Madan Gopal, who Singh claims to be his cook, is actually his bodyguard.

When a consignment of drugs leaves Pakistan for Punjab, it usually takes two routes. In areas where there are barbed wires on the border, smugglers stuff them into PVC pipes and push them across into India, where couriers pick them up for transporting them to the main land.

Though most of the Punjab border is guarded by barbed wires, the riverine belt of around 100km is unguarded. To push drugs through this region, drained by Ravi and Beas and lined with dense forests, smugglers use boats and couriers. This riverine belt is mostly to the west of Gurdaspur and Pathankot, and in some areas of Ferozepur, making them most vulnerable. Investigators suspect that the terrorists used this tried and tested route used by the drug smugglers to sneak into Indiaand that they even had help from the local drug mafia.

How could a hijacked car speed past several checkposts in a situation of high alert?

Transporting drugs to the border from Pakistan is not a problem, the real problem starts once the drug consignment reaches Punjab, from where the involvement of a huge network of people at every level becomes necessary. In the border areas of Punjab, it is stored in safe houses for some time – called a cooling off period – and then relayed from point to point through an intricate network of middlemen and peddlers, who charge the dealers on the basis of the risk and distance involved. If it wouldn’t have been for the blue beacon atop the hijacked Mahindra XUV of Superintendent of Police Salwinder Singh the terrorists wouldn’t have been able to speed past several police checkposts, where the policemen saluted and just let it through.

But then again there is this question of the 24 hour window the security establishment had from the time Singh and his cook informed the Punjab Police about the imminent attack and the hijacked blue-beacon vehicle. Was this information communicated by the Punjab Police to the Central agencies? Were the security personnel not alerted about the hijacked blue beacon car? How could a hijacked car speed past several checkposts in a situation of high alert? The Central agencies claim they were unaware about this intelligence and that there was a slip-up on part of the Punjab police that led to the delay or lapse in planning the appropriate responsive counter operation. However, according to an intelligence note prepared by additional director general of police, law and order, Hardeep Dhillon, the intelligence wing of Punjab had already issued intelligence pertaining to plans to carry out a spectacular attack in India possibly around New Year celebrations, 5 days prior to the strike.

The security and political establishment already know about who’s-who in the drug trade.

This should not be a surprise to anyone. The security and political establishment already know about who’s-who in the drug trade. Shashi Kant, who headed departments of prisons and intelligence for several years had submitted a list of politicians with suspected drug mafia links to the Punjab and Haryana High Court in 2014 after his earlier letter was admitted as a public interest litigation.

Kant, who was ADGP (intelligence), claimed that it was a four-page list, which was prepared by the intelligence department in 2007, and he gave it to the CM. He alleged that the list was kept under wraps and little action was taken as political careers of those named in it thrived after 2007 even after it was submitted to CM Badal.

The government and the investigative agencies have known since years about these drug cartels, the routes they use and also it’s nexus with the police and the politicians. Punjab, for many years, has been a transit point for drugs from Afghanistan. The drug money has become a major source of funding of elections in Punjab and over the time a well-organized drug cartel has came into existence with active connivance of politicians, police officers and drug lords. This drug money is used in financing militancy.

However, it was only after GreatGameIndia published the detailed report, Pathankot Attack & The International Drug Trade on how the ‪‎Pathankot attack was not just another usual terror incident but related to the international ‪‎drug mafia stretching from Afghanistan via Pakistan to India from where it is shipped off to Dubai and Europe that the mainstream media started to see the incident in the right perspective. Punjab News Express was the first to take note of it in its editorial piece following which the entire mainstream media acknowledged the central role the drug trade played in the attack taking a much needed departure from its usual contradictory, dumb-founded infiltration narrative.

Although this is a good start, it has brought us to a point where we collectively have to confront many of the unpleasant buried questions that we have chosen to ignore, don’t care about or in some cases suppressed knowingly.

There are uncanny recurring patterns to these attacks to the 26/11 Mumbai Attacks of 2008 that we already observed during the attack in Gurudaspur. The most bizarre is the recovery of two Global Positioning System devices (GPS) from the terrorists that shifted the focus of the entire investigation to where the terrorists had actually come from and how they entered the country. A post-operation investigation was launched to establish the route that they possibly took from Pakistan. Three days later, the police claimed that doctors found a glove on one hand of the terrorists carrying a marking “Made in Pakistan”. This claim raised enough heat. It was questioned as to why the police did not find the glove on the first day when they conducted a body search. However, the security agencies have failed to piece together a final report on the route taken by the terrorists based on the coordinates fed into the two GPS devices seized from the terrorists; along with the Punjab Police and the Border Security Force making contradictory claims regarding the route taken by the terrorists for entry into India.

Similar to Gurdaspur attack with the 26/11 Mumbai Attacks also there are still unanswered questions related to the GPS (forgotten by the terrorists in the boat) and the route taken by the terrorists. Investigations have thrown up several questions about the last trip of Kuber, the Indian fishing trawler that the Pakistan-based terrorists used to reach Mumbai.

But this time with the Pathankot attack the rabble rousing balloon using the GPS didn’t fly with the intelligence agencies admitting the modus operandi of the drug cartels to hoodwink them. BSF report on drug smuggling explains how mobile phones of Pakistani companies are used by Indian smugglers and vice versa. SIM cards are frequently changed to hoodwink surveillance. Indian smugglers use Pakistani SIM cards and Pakistanis use Indian SIM cards. Trans-national criminals contact each other from within and outside jails as well. Nonetheless the case of the missing GPS still remains a mystery.

As investigative agencies grapple with the daunting task ahead of them under great pressure from the drug cartels and the seemingly discouraging and obstructive attitude of the establishment, the real questions that could unravel the entire mystery are still left to be answered or even raised. One such case is the role of diamonds in the terror attacks in India.

Role of Diamonds in Terrorist Financing

Diamonds can be vulnerable for misuse for money laundering and terrorist financing purposes because they can transfer value and ownership quickly, often, with a minimal audit trail. They provide flexibility and an easy transportation of value.

A 2003 Report assessed various alternative financing mechanisms that could be used to facilitate money laundering and or terrorist financing. Trading in commodities, remittance systems, and currency were assessed on each of their abilities to earn, be moved, and store value. Diamonds were the only alternative financial device that fit into all of these assessment criteria.

Douglas Farah an American journalist, author and national security consultant in his book Blood From Stones – The Secret Financial Network Of Terror that diamonds were used as an untraceable currency and source of income for terrorists.

Diamonds possess several characteristics which make them vulnerable to money laundering and terrorist financing. These include:

Following the September 11, 2001 attacks serious allegations were made by Washington Post Investigative Reporter Douglas Farah an American journalist, author and national security consultant in his book Blood From Stones – The Secret Financial Network Of Terror that diamonds were used as an untraceable currency and source of income for terrorists.