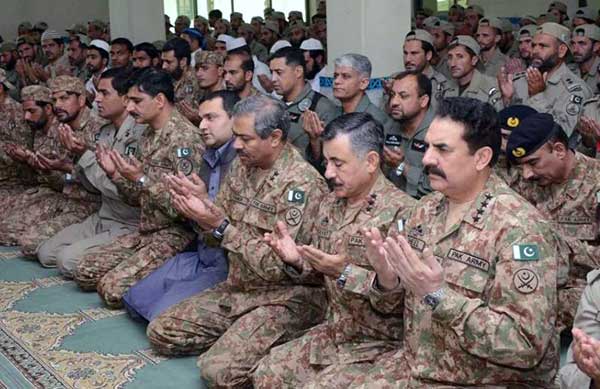 The grand deception perpetrated by Pakistan Army on its people, and on the world, must be exposed. Pakistan Army chief, General Raheel Sharif, ever since he has taken over the reins of the army, has been running around the world boasting about how he and his troopers have been taking on terrorists in his home turf and how great the sacrifices of his troops have been neutralising terrorism from the region.

General Sharif has no doubt a way with words, like a true blooded soldier, he can bluff through fire and smoke and sound convincing; that’s his training and experience. But when he is dealing with the serious issue of terrorism the safety of his people should come first, and then the people of other countries. He needs to measure his words, contain his overpowering urge to fabricate facts and occasionally keep his word.

His latest declaration to root out terrorists and terrorism from Pakistan came within hours of a suicide bomber blowing himself up in a Lahore park crowded with Christians celebrating Easter this March. More than 72 people were killed and several thousand suffered various kinds of injuries, many serious. No doubt, the General was outraged and he declared that “these inhumane savages will not be allowed to overrun our life and liberty.”

He forgot that he has been declaring such sentiments and bravado every time a terrorist group attacks minorities or military installations or a terrorist blows himself up in crowded localities. Terrorists have been taking on the might of Pakistan Army since December 2007 when Tehrik-e-Taliban Pakistan (TTP), a half-breed terrorist group decided to challenge the authority of Pakistan Army. TTP can be termed half-breed simply because many of its founding fathers were once stooges of Pakistan Army and lived and operated like criminal warlords on the patronage of the military and its intelligence outfits.

Ironically, instead of taking on the terrorists who had turned on their masters, the army spent most of its energy in beating its breast, in the world capitals, how Pakistan was itself a “victim“ of terrorism. It was a difficult proposition to digest simply because every one knew Pakistan as a terrorist incubator for long. Now this same country, which bred Taliban, a part of al Qaeda, all of Lashkar-e-Tayyeba and Jaish-e-Mohammad and other countless extremist and terrorist groups since 1948, was calling itself a victim of terrorism. It was truly fantastic.

No doubt, there were attacks and the number of people, including troops, killed by terrorists was rising in Pakistan since 2007. But Pakistan was certainly not a victim of something which it had created. It was a victim of the blowback of a convoluted, suicidal policy the country has been following since its independence—that of using violence as a means of harming its own people and the people of the region. To implement this policy, the country and its armed forces created terrorist groups has instruments of violence, and many of which have since turned against their patrons for various reasons.

So when Raheel Sharif talks about taking on terrorists groups, he means punishing his own agents of destruction which have gone rogue. It is an impossible task to perform because it would mean self-mutilation or self-amputation of the army’s core strength. This is one of the reasons, despite bombastic claims, Pakistan Army has singularly failed to stem the tide of rising terrorist attacks in the country.

In the Lahore case, Raheel Sharif has managed to hoodwink his own people more than outsiders. This is the new trick which the army is playing. After the Lahore attack, the Army chief went into huddle with his commanders, as always, and declared to the public that he would not rest till the killers were punished. Remember, this is what he said when over 100 students were killed by terrorists in Peshawar a couple of years ago. Then, his army first decided to put the blame on India and then figured out that it was not going to work since the army’s own proxy groups were quick to own up the responsibility.

The Lahore attack gave Raheel Sharif another go at making himself the uncrowned king of Pakistan and the Saviour of its people. He said he was launching another military operation against terrorists and this time in Punjab. There were loud surprises every where—the world thought that finally the army was turning to the incubating fields of terror, that is Punjab. But there were large, equally compelling questions that clouded a clear answer—what will happen to the army’s key protégés, LeT and JeM, both based in Punjab, which the army was now planning to target.

The world missed General Sharif’s master stroke. The General unleashed his armoured vehicles and combat jets to punish the perpetrators of Lahore suicide bombing. For days, the general belief was that terrorists hiding in Punjab were being pummelled. But when LeT chief Hafiz Saeed and JeM chief Masood Azhar were seen in public, during these operations, gaily holding rallies and ranting against India and the world in general, the penny fell. The General and his army were not targeting the real terrorist groups; they were after someone else, who turned out to be the head of a notorious kidnapping and criminal gang called Chhotu gang.

This Chhotu gang was not a new group of criminals but quite vintage. The political leaders knew about them and had not been shy of taking obligations from the gang leader and his men for managing rivals and elections. The military, which is spread thick over Punjab, had been benevolent towards the criminal groups for various reasons. So why was Raheel Sharif targeting the Chhotu gang which, of course, as the script went, promptly surrendered. Strangely, despite all the fireworks, the leader and his key men remained intact.

Now the question is: Was the Chhotu gang involved in the Lahore attack? Or for that matter, was the criminal gang involved in any other terrorist attack? Were they helping the TTP or the Haqqanis or al Qaeda? There is no public evidence of the gang’s terrorist links. The army has not made any such claims either. So why was the Chhotu gang the target of a counter-terrorism operation?

The answer is not difficult to figure out: it is General Raheel Sharif’s new bag of tricks to hoodwink his own people and the world.