Our Forgotten Wars: Victimisation and Survival in Bodoland 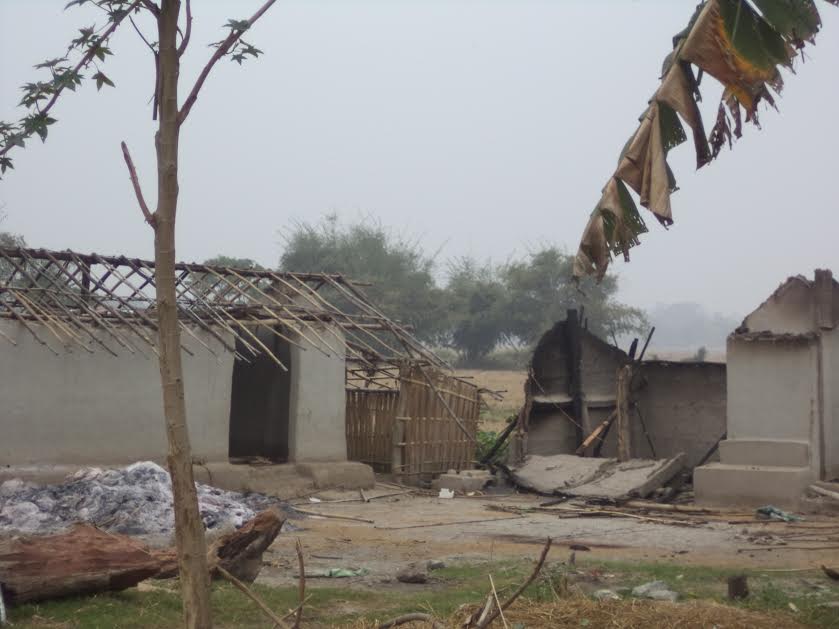 “In modern warfare, the enemy is far more difficult to identify. No physical frontier separates the two camps. The line of demarcation between friend and foe passes through the very heart of the nation, through the same village, and sometimes divides the same family.”     — Roger Trinquier1

On the fateful morning of July 21, 2012, at around 3.00 a.m., unidentified gunmen entered SK’s house where he and his family were residing in Ti village located 12 kilometres from Kokrajhar police station.2 The gunmen opened fire at the family indiscriminately. SK died on the spot due to bullet injuries sustained on his head, back and abdomen. Another five members of his family sustained multiple bullet injuries from the shooting. Four of those injured were taken to three different hospitals. Those treated in Bilasipara Sub-Health Centre, R.N.B Civil Hospital (Kokrajhar) and Fakhruddin Ali Ahmed Medical College and Hospital in Barpeta were discharged after receiving medical treatment.

Asyd, their ten-year old son required continued treatment due to several complications that arose from injuries in his groin and thigh. He was initially treated in Fakhruddin Ali Ahmed Medical College and Hospital and then shifted to Patna with financial support from an NGO. However, financial assistance soon dried up and was not extended for further treatment in Pune.

The family then found themselves in Jauliapara in a make-shift relief camp which was set up to hold approximately 8,000 Bengali Muslims returning home. The people living in Jauliapara had originally left from their villages in the aftermath of the September 2012 ethnic violence in Kokrajhar and Chirang between the Bodos and Bengali Muslims. They became part of a floating population of more than 500,000 internally displaced people (both Bengali Muslims and Bodos).

As stated by the boy’s mother at the time, “We had to bear all financial expenses for Asyd’s treatment; with the money we pooled together and the relief money we managed to barely meet the expenditure for his treatment.” The interview was conducted in the camp in February 2013, in the midst of 8,000 people.

For those immune to the stories of violence that emanate from India’s forgotten wars, the narrative can be treated simply as an account of routine collateral damage which is intrinsic to a situation of protracted violence. From the standpoint of counter-insurgency theorists and strategic thinkers, stories such as these are the flotsam of the conflict-experience. Individual narratives from this perspective should be depersonalised and subsumed under statistical data, with conflict-induced mortality and injury becoming the primary set of indicators which highlights the ebb and flow of the insurgency (and also the success of counter-insurgency).

The narrative is unfortunately fundamentally problematic for those engaging in the social scientific study of violence as it raises the question regarding the degree to which one can remain a detached observer or become an active participant. The craft of empirical social science is such that there is a fine balance between observation and participation.

By virtue of conducting research, one must utilise objective (and systematic) methods to provide data and evidence on the phenomenon under study. At the same time, from the perspective of a citizen, a researcher attains the privilege of witnessing firsthand, the actual unfolding of events and processes, for an extended period of time in so called “peripheral” areas that are far-removed from the news debates and policy discussions. Furthermore, by virtue of living in these environments, the scale of violence and its actual impacts become increasingly personal. Statistics become living persons, with hopes for their future and dreams for their families. It is politics and the cold, rational and calculated use of violence that destroys the future for these people. There are a number of excellent works on the political dynamics underlying the causes of conflict in Bodoland. While acknowledging them, the article seeks to draw attention to the outcomes of violence and forced displacement in both 2012 and 2014 humanitarian crises in this part of Western Assam.

In both 2012 and 2014, the greatest barrier to healthcare provision in the Northeast was the security situation…

It is in the capacity of an academic researcher and a policy advisor to a humanitarian relief organisation (which works in the Bodoland Territorial Autonomous Districts or BTAD region) that the empirical findings being discussed in the article must be contextualised. The situation being discussed is thus based on multiple field visits to relief camps between 2012 and 2016, visits to villages destroyed in both episodes of ethnic violence, interactions with community members, interactions with injured victims, district officials, local civil society organisations, externally based humanitarian organisations and security forces.

The humanitarian emergency which occurred in the aftermath of the 2012 violence between Bodos and Bengali Muslims (in which more than 100 people were killed) was a crisis of immense proportions and stretched the existing response mechanisms. According to the data provided by the Assam State Disaster Management Authority (ASDMA), the peak of the crisis witnessed 485,921 persons displaced (in September 2012) with 246,582 persons residing in “formal” relief camps. The duration of the emergency can be gauged by the fact that as of January 31, 2013, there were 38,959 persons still residing in “formal” camps. These camps were ethnically segregated with Bodos and Muslims residing separately.

The second crisis that occurred in BTAD was a consequence of the targeted violence and massacre of 82 Adivasis in late December 2014 across Sonitpur, Kokrajhar and Chirang. As a consequence of the massacre and subsequent retaliatory violence, approximately 289,000 people (both Bodos and Adivasis) were internally displaced and spread through 139 relief camps across Chirang and Kokrajhar. It is important to gain a comparative understanding with other crisis situations. According to the United Nations High Commission for Refugees (UNHCR), the total number of “persons of concern” (refugees and Internally Displaced Persons) after 26 years of full-fledged civil war in Sri Lanka was 286,372 in 2013.

What is a Relief Camp?

The relief camp constitutes the basic unit for the planning of relief operations by both governmental and non-governmental organisations (NGOs). The number of existing camps also provides a superficial index of the emergency situation. Once camps are closed, the emergency is seen as over. In theory, the relief camp is supposed to be a secure location where the communities fleeing violence are provided safety, shelter, food, water and healthcare.

In reality, the situation in the camps is contrary to what the term seeks to convey. In most cases, relief camps are unsafe, overcrowded spaces with inadequate shelter (and privacy). Families were reduced to living in make-shift tents made from with tarpaulin, tin-sheets and bamboo. There was no electricity. Families were forced to survive on supplies of basic food rations and Non-Food Items (NFIs) provided by both government and civil society organisations.

The degree of overcrowding in camps can be seen for instance in a field assessment conducted in early 2105 in Kokrajhar, which found that Patgaon Provincial High School had 8,497 “inmates” living there. Similarly, Pakhirguri Relief camp, which was established around a PHC, had 7,577 residents. The risk of waterborne diseases and malnutrition in these camps was also extremely high. This can be understood by the fact that between December 24, 2014, and January 08, 2015, alone, 2,884 diarrhea and 3,159 dysentery cases were treated by health authorities in Chirang and Kokrajhar. Also ever present is the occurrence of sexual violence, given the fact that toilets are unlit and are at a distance from the camp.

These sub-human conditions are accentuated by the fact there is also a mismatch between the actual resources available and the needs of the affected community. In the course of the assessment mentioned earlier, in Chirang, it was found that the Desori Border Roads Organisation (BRO) Office Relief Camp had six toilets servicing 2,100 residents while the nearby Deosri Relief Camp had ten unsegregated toilets servicing 6,160 residents. The lack of resources in the same district can be gauged by the fact that there were a total of eight ambulances available to attend to 19,366 displaced persons in 2015.

Those relocated to camps also faced a double burden. Not only were families trying to survive in the existing situation, the pervasive fear and restrictions on movements, meant that there was no means available to take care of one’s homestead and farmland in the abandoned villages. In many cases, individuals had left behind essential documents such as ration cards and school certificates which were the only means available to access welfare schemes.

One of the least known impacts of both the crises was on health service provision and the obstacles faced by district health authorities in ensuring access to urgent medical care were insurmountable. In both 2012 and 2014, the greatest barrier to healthcare provision was the security situation. From the viewpoint of those living in camps it was virtually impossible to access Community Health Centres, sub-PHCs and PHCs due to the pervasive sense of fear and insecurity (as well as restrictions on movement due to curfews).

In the case of 2012, a large number of Accredited Social Health Activists (ASHAs), Auxiliary Nurse Midwife (ANMs) and “Anganwadi” workers fled to the camps thus leaving the institutions without staff. Other effects of the conflict as witnessed in the field were the inability of Doctors, ASHAs and ANMs to access camps and work in camps due to ethnicity. There were also cases of existing sub-PHCs (such as Bengtol in Chirang District) that were converted to IDP camps which meant an immediate end to regular services being provided. There was also an increased workload for Doctors, ANMs and ASHAs who began working with new patients for whom they had no medical records or detailed case histories. The extent of this problem can be gauged by the fact that in Bilasipara sub-division (in Dhuburi District) the existing sub-PHC became responsible for extending services to around 4,000 (IDPs) overnight in four camps in addition to the normal workload.

From the perspective of the district health authorities, the greatest populations at risk were pregnant women, infants and children below the age of five. In 2012, an estimated 4,000 pregnant women were living in camps while in 2014, there were approximately 888 pregnant women in relief camps (as per the official data) in Chirang and Kokrajhar. In 2014, in Chirang alone there were 1,149 children less than one year in age and 2,492 children in the age group one to five years living in camps. Furthermore, an estimated 1,108 children were Out Of School across eight camps in the same district.