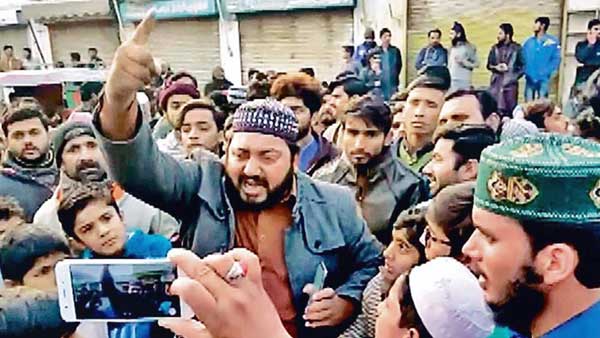 The incident of mob violence at Gurdwara Nankana Sahib in Pakistan on Friday, 03, January has raised deep concern worldwide and especially amidst the Sikh community. Reports suggest that, post the afternoon Friday prayers, a mob comprising of hundreds of Muslims laid siege on Gurdwara Nankana Sahib. The holy premises were pelted with stones and Sikhs devotees offering prayers in the Gurdwara were threatened. The homes of other Sikhs residing in Nankana Sahib premises were also attacked with stones and they were told to vacate the city.

The incident has its roots in an earlier case of forcible abduction, conversion and marriage of a Sikh girl to a Muslim boy that took place in Nankana Sahib in September, 2019. It was reported that one Mohammad Hasan abducted Jagjit Kaur, the daughter of a local Sikh Granthi (Religious preacher) at gun point and married her. Abducting the daughter of a religious preacher was surely with the intention to malign the Sikh religion itself. At that point in time the negotiations between India and Pakistan for opening of the Kartarpur Corridor were at a sensitive stage and the abduction came as a big embarrassment for the Imran Khan led Government of Pakistan.

The matter was taken up at the highest level with the Governor of Punjab getting involved. Jagjit Kaur stated that she had converted and married by her own will. Punjab Governor, Chaudhry Sarwar, however, gave instruction for shifting of the girl from the house of her so-called husband to Darul Aman in Lahore. Eight persons suspected for the kidnapping of Jagjit Kaur were also taken into Police custody. Later, a video recording of the Governor stating that the marriage would be considered to be void and the girl would be sent back to the house of her parents became public. The girl, however, has still not been returned to her parents and the matter continues to be under judicial scrutiny.

In the course of the latest incident of violence, seen prominently in video footage is the brother of Mohammad Hasan. He is seen leading the crowd and making provocative statements. He is seen alleging that authorities are forcing the girl to go back to her parents while she is very content with her conversion to the Muslim faith and her marriage to Mohammad Hasan.  He is openly threatening to drive away all Sikhs from Nankana Sahib and rename the city and the Gurdwara as “Ghulam-e-Mustafa.”

India, very rightly, strongly condemned the “wanton acts of destruction and desecration of the holy place,” and called upon the government of Pakistan to take immediate steps to ensure safety, security, and welfare of the members of the Sikh community. Pakistan has responded by alleging that, “attempts to paint this incident as a communal issue are patently motivated” and that “all insinuations particularly the claims of acts of ‘desecration and destruction’ are not only false but also mischievous.”

The Foreign Office of the country has issued a statement saying that the incident has not occurred at all and what actually happened was a scuffle between two Muslim groups. Further, reputed English dailies like the Express Tribune and Dawn have not even mentioned the incident at all; there is a media blackout in place. This blatant denial of the very serious incident by the Government of Pakistan is a matter of grave concern.

The Sikh community, in particular, is quite distressed by the incident. “Appeal to @ImranKhanPTI to immediately intervene that the devotees stranded in Gurdwara Nankana Sahib are rescued and the historic Gurdwara is saved from the angry mob surrounding it,” said Punjab chief minister, Captain Amarinder Singh, in a Tweet. Various other Sikh leaders, institutions and prominent personalities also expressed concern.

The aforementioned pressure by India and the Sikh community had the desired effect. Within no time there were videos of Pakistani attempts to restore the situation going viral on social media. The brother of Mohammad Hasan made a video in which he apologised for his behaviour; leaders of all faith establishments and local officials/politicians too came on-screen to assure the Sikh community that it was integral to the society of Nankana Sahib and Pakistan.

Apparently, the Pakistani establishment is very worried about the repercussions of the incident, especially on their efforts to woo the Sikh community, and it wishes to put the matter under wraps

The fact, however, remains that the family of Mohammad Hasan is, through this violent and obnoxious protest, attempting to pressurise the authorities into putting an end to the judicial proceedings against Mohammad Hasan.

If the family had a problem against the administration, it should have organised a street protest or laid siege on the government installations. That it chose to show its strength at the holy Gurdwara is a clear message that an inability on the part of the administration to bring early closure to the case would result in danger for the Sikh community. In other words, to remain safe in Nankana Sahib, the Sikh community would have to accept the conversion of Jagjit Kaur and her marriage to Mohammad Hasan

It becomes quite apparent from the proceedings that this family has the political power and wherewithal to gather a violent mob at will. It stands to logic, therefore, that the abduction of Jagjit Kaur was done on the strength of this political power. The incident also points towards a bigger conspiracy of creating circumstance wherein the exodus of the Sikh community from Nankana Sahib could be engineered. Jagjit Kaur is a mere pawn in this higher game plan.

The deep acrimony against minorities in Pakistan has once again become visible. Any and every minority voice being raised for justice is considered to be an affront to the Sunni majority and mob violence is used to suppress the same. The reality of Pakistan lies in the mob violence and the statements made therein and not in the placating voices and half hearted cover-ups.

It is time for the world in general and India in particular to take note of the blatant suppression of minority communities in Pakistan with use of brute force. There is a need to get the Government of Pakistan out of its denial mode and compel it to take concrete action to ensure protection of all communities.