Myanmar: How to deal with a Bully like China? 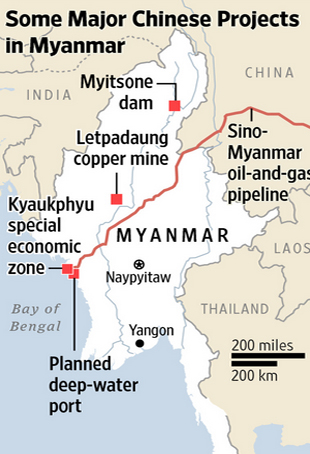 Not so long ago, Irrawady in its editorial of 11th August, expressed its fears about China as follows.  It said that at that time, that the Chinese weapons and economic influence are both spreading in Myanmar and the day may not be far off when China’s shadow will become so big that it will completely engulf Myanmar.

This is not the view of Irrawady alone, but generally reflects the feelings of people in every walk of life including those in the Government.

Citing some instances, Irrawady editorial continues that it cannot be a coincidence that armed conflicts have escalated in the north since the abrupt suspension of the Myitsone Dam.  While the Chinese projects have not been touched by the armed insurgents, it also pointed out why a portion of the Kaladan Multi Mode Transit and Transport Project of India was attacked by Rakhine Militants.

It may also be recalled that the Army Chief while referring to the insurgent situation in the north, said in Moscow that outside interference is the main cause for escalation of insurgency.

The Myanmar Government on its part has stood its ground on many issues despite pressure from China.  Some these were

This issue came up again last month and the book “In the Dragon’s Shadow” South East Asia in the Chinese Century by Sebastian Strangio came up for discussion.  The author opined that while China is the most important economic partner to every nation in the region, it is also their thorniest foreign policy challenge.

In the face of a rising and assertive China- it also poses a threat to the countries of the region and Myanmar is not an exception.

There is a lurking fear among the nations that they would become indebted to China that over a time the BRI of China will compromise their sovereignty.  Laos appears to be the latest country to experience the predatory debt squeeze.  Other examples of this kind of a squeeze are well known like that of Hambantota in Sri Lanka and even Maldives.

Despite the Covid outbreak and the uncertain situation following the general elections, China has been pushing incessantly the BRI projects in Myanmar that comes under the China-Myanmar Economic Corridor.  Of particular strategic importance to China are the Kyaukphyu deep sea port and the Economic Zone and the Railway from Muse to Mandalay and then on to Kyaukphyu that would give an opening to the Indian Ocean.

Opening to the Indian Ocean appears to be critical and urgent for China.  Despite the Wuhan Virus outbreak and consequent economic slow down China has been pushing for its implementation at every given opportunity.

Every country has its own way of handling the Chinese bullying.  India has taken the bull by its horns and is now involved in direct confrontation with massing of troops and other weaponry in the Ladakh region.

Myanmar in it own subtle manner has been going slow on the projects with perfectly legitimate reasons.  The key word is “CAUTION.”

First, Myanmar has created a “Project Bank” that lists only investments that will fall under the country’s sustainable Plan and the BRI Projects are to be included.  So far neither Kyaukphyu nor the Railway Project from Muse to the Kyaukphyu Port have been added to the Bank.

Secondly, in June last year, Myanmar handed over the Railway Project submitted by the Chinese Railway Eryuan Engineering Group for a detailed scrutiny by a Swiss firm.  The Swiss Firm will check the details of the feasability study including Railway routes, alignment, specifications, the costs involved and finally its impact. This makes sense as scrutiny by a third party cannot be objected to by China.

Again, the scrutiny of the new Yangon City project is being handled by both Roland Berger, a German Firm and the Ministry of Industry and Foreign Economic Relations.  The scrutiny will cover end to end in all aspects of the project.  Nine other firms including one from India have been qualified to bid against the plan given by the Beijing-based China Communication Construction Ltd.

In dealing with the CRI projects under the CMEC Corridor, Myanmar is seen to have adopted besides a cautious approach, two essential Criteria

China’s reaction is not known.  Adverse reaction may come but indirectly like the Chinese enclaves in Myanmar like the Wa region or the Mongla region getting aggressively active, or general escalation and more intransigence from the armed Ethnic organisations in the Peace Process!