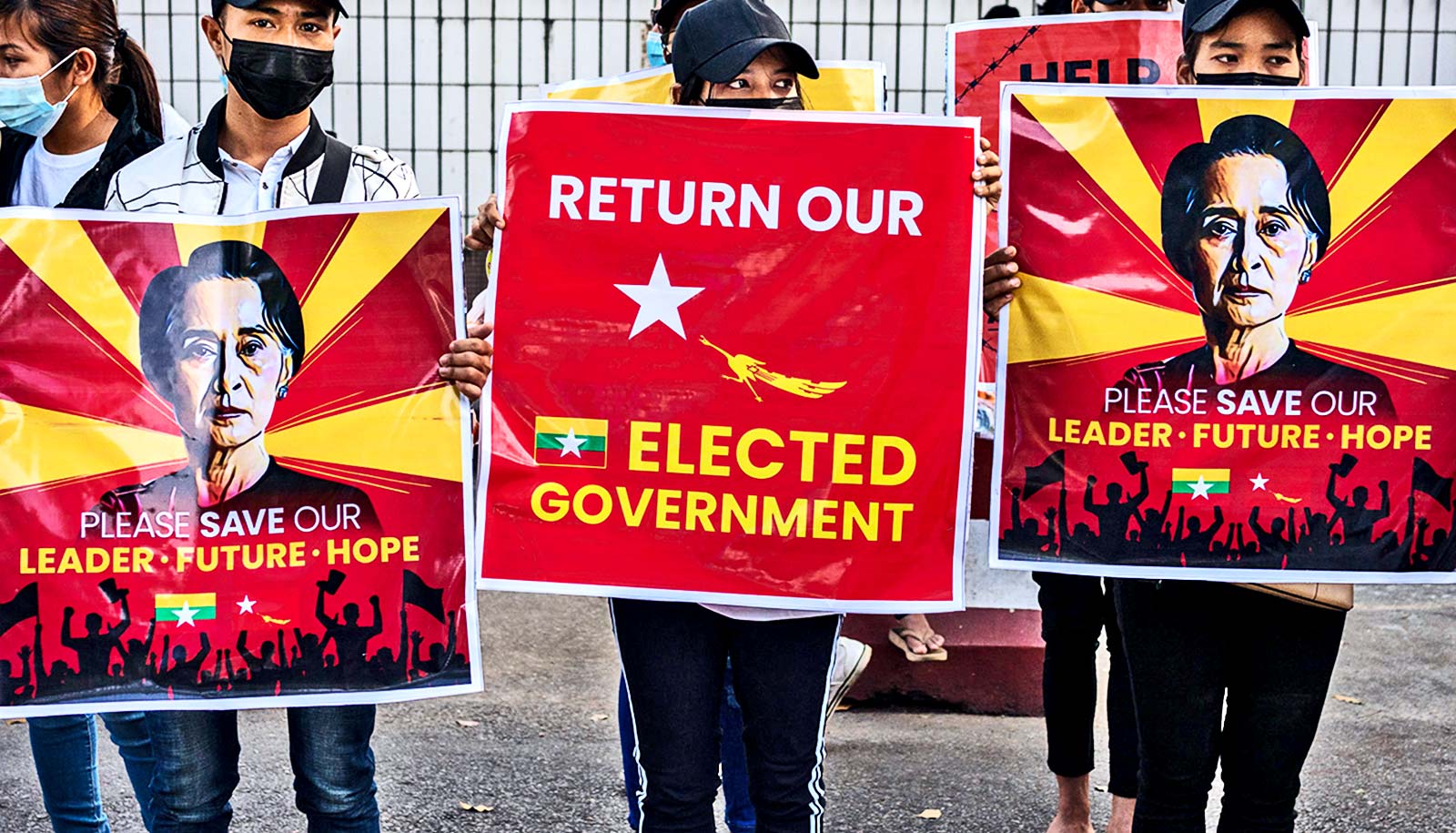 On 01 February, Myanmar’s democratically elected members of the National League of Democracy (NLD) have been disposed of by the military junta, also known as ‘Tatmadaw.’ President Win Myint and state counselor, Aung San Suu Kyi, has been detained. The Coup took place just before the new session of the parliament and after the landslide victory of NLD in the recently concluded election. The armed forces sided with the opposition party, asking for a rerun of the vote, claiming widespread fraud [1]. Following the Coup, mass protests have erupted across the country, demanding to restore democracy. Since then, more than 500 people have been killed in the violent clash between protestors and armed force personnel.

Fearing life, many people fled to neighboring countries like India and Thailand to seek refuge. There is a large influx of people entering India through a porous and unfenced border, especially in Manipur [2]. The influx of people entering India is a sensitive issue and poses a grave challenge to India’s internal security. Also, New Delhi is walking a tightrope in dealing with the Myanmar crisis. Though India has advocated for the restoration of democracy but openly did not condemn the Coup.

Further, amid the crackdown, Indian representatives were among the many that attended the Myanmar Armed Force Day military parade in Naypyitaw on 27 March [3]. Geographically located at the trifurcation of ASEAN, India (South Asia), and China (East Asia), Myanmar’s internal crises have a huge geopolitical implication. Especially for India, Myanmar is a bridge to Southeast Asia and ASEAN and an essential factor in keeping the Northeastern states peaceful.

India shares 1,643 km of porous, unfenced border with Myanmar. Any instability in Myanmar has a direct impact on India’s internal security. The Northeastern states, which are at peace after many decades, cannot entertain any situation that hampers peace. According to the Ministry of Home Affairs (MHA) data, [4] there is an 80 percent decline in the insurgency-related incident and 99 percent fall in civilian deaths than 2014. Over the years, the (AFSPA) armed forces (special Power) Act, 1958, has been removed from Meghalaya and Tripura, and its application has been reduced in Arunachal Pradesh. Though New Delhi has been successful in establishing deals with many insurgent groups, other groups such as the National Socialist Council of Nagaland (NSCN-K), United Liberation Front of Assam- Independent (ULFA-I), and Coordination committee remain active[5]. They allegedly use Burmese territory to conduct a cross-border strike in India, especially in Manipur and Nagaland. The current situation in Myanmar can again be a breeding ground for such separatist groups to reignite the dozed militancy in the region. The Myanmar military over the last few years has maintained a healthy relationship with the Indian army. The operation ‘Sunrise’ [6] with the Myanmar army in 2019 has enhanced both army’s cooperation and synergy. Recently, the COAS (Chief of Army Staff) in a seminar has lauded the contribution of Tatmadaw in curbing the militancy in the Northeast region [7]. The army chief’s comment underlined the importance of Myanmar in the maintenance of India’s internal security. Although, India has termed the Coup unfortunate, it did not comment directly against the Tatmadaw action.

The harsh crackdown of the military against people raising their voice against the Coup has forced people to migrate to the border state. The refugees arriving from the Chin state of Myanmar have perplexed India’s policymakers. India cannot turn a blind eye as these people are ethnically related to the dominant Mizo community in Mizoram. Also, India cannot upset the Myanmar junta by providing refuge to the officials, especially policemen fleeing military crackdown. The influx of refugees has led to the difference in the Central and state government [8]. This situation does not augur well for the region as volatile as North East India. Can India ignore Tatmadaw?

India needs the Myanmar military to achieve its long-term strategic objective in Southeast Asia. With an eye on China, India is pondering over all the scenarios before making any concrete step. However, the scope is limited to New Delhi, as it needs Myanmar more than Myanmar needs India. The reason being, to keep China’s influence limited, India is engaged in various projects in Myanmar, including the India-Myanmar-Thailand trilateral highway, the Kaladan Multimodal Transit Transport Project, and invested in the development of Rakhine State. Further, Myanmar remains at the fulcrum of India’s ‘Act East Policy.’ The western countries, including the USA, Britain, Canada, and the European Union, have already sanctioned Myanmar to punish the military and its business allies [8]. Further, isolation even from India will put Myanmar completely in Beijing’s hand. The people in Myanmar are already claiming that the ‘February coup’ is designed in China [9]. There is already a mass protest against China and widespread calls for boycotting Chinese products. Many protests are carrying placards “Myanmar coup, Made in China.” Is China involved?

The military Junta in the past has been wary of the growing Chinese influence in the country, and it was NLD, under the leadership of Aung San Suu Kyi, who developed a healthy relationship with Beijing. However, Beijing has opposed a statement by the United Nations Security Council condemning the Coup, terming the situation as an internal matter, put it under suspension. However, many experts argue that the military Coup in Myanmar does not serve the region’s long-term interest.[10]. China is already involved in many infrastructure projects, including China-Myanmar Economic Corridor. China sees Myanmar through the prism of connectivity, where its primary strategic goal is to gain access to the Indian Ocean and reduce its dependence on the straits in the Indian Ocean. It is a popular notion that – China “wins” under authoritarianism and “losses” under democracy [11]. Also, various groups within Myanmar, having close relationships with China, are challenging the military Junta over the Coup [12]. Whether the Coup has China backing is yet to be established, but the growing anti-Chinese sentiments provide enough space for India to put forward its interest in the region. With, India as a major obstacle in China’s bid to be Asian hegemony. Myanmar talking the Beijing words is the worst possible scenario for India’s ambition in the east.

New Delhi’s reaction to the recent development in Myanmar is entirely predictable, and it is how India has handled Myanmar in the past. However, the situation this time is quite different due to China’s geo-economics interest in the region. Myanmar is crucial for India’s ambition to connect to Southeast Asian nations. Instability in the region is neither good for India’s internal security nor for India’s national interest in the region. The policymaker shall formulate working mechanisms with the military while advocating for the reinstatement of democracy in the country. Looking at China’s challenge, India can also initiate to pacify the western stance on Myanmar while keeping the communication line for restoration of democracy in the country. Also, India should not be harsh with the refugees, nor they (refugees) should be allowed to establish permanent camps. Proper monitoring of the people crossing the border will improve India’s image internationally and help India attain critical strategic goals in the region.