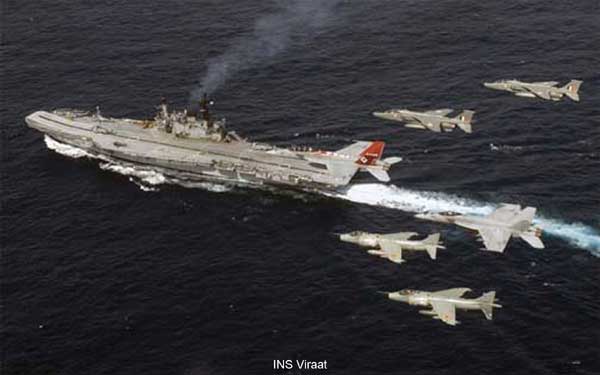 The project for an Indigenous Aircraft Carrier took shape in 1979. Under the terms of the Indo–French MOU of 1988, an agreement was signed with DCN of France for assistance by its design group, STCAN, in the concept design of the Sea Control Ship (SCS) and for transfer of technology.

An Indian Naval Design and Liaison Team (INDLT) of Naval architects was deputed to DCN for participating in the design process, for ascertaining the major areas of design work to be entrusted to selected consultants during subsequent stages of design work, and to audit Cochin Shipyard for its capability to build the carrier.

Under the terms of the Indo-French MOU of 1988, an agreement was signed with DCN of France for assistance by its design group, STCAN, in the concept design of the Sea Control Ship (SCS) and for transfer of technology.

By 1990, the concept study by France’s DCN, assisted by the INDLT, had evolved designs for a 25,000 ton catapult version and a ski jump version and confirmed that the carrier could be built in the Cochin Shipyard. The financial crisis of 1991 precluded sanction for a carrier of that size and the next few years were spent in juggling designs for a smaller carrier. The grey area was the type and number of aircraft that the carrier would operate.

These developments helped to finalise the types of combat aircraft that would fly from the ADS. The carrier would embark:-

The staff requirements were finalised for a gas turbine propelled, 28-knot, 37,000-ton carrier with an angled deck and a ski jump, to operate an air group of 30 combat aircraft and helicopters and manned by 1400 personnel.

CCS approval for IAC was accorded in 2003 and Cochin Shipyard commenced construction in 2005. Meanwhile, the nomenclature of the carrier project had changed from Sea Control Ship (SCS) to Air Defence Ship (ADS) and finally to Indigenous Aircraft Carrier (IAC). The IAC is expected to enter service by 2015.1

Naval carrier-borne aircraft are usually variants of Air Force shore-based aircraft. They cost less because of the economies of scale in design, development and production. For special requirements like Airborne Early Warning (AEW) aircraft, a Naval variant has to be developed separately.

Dispensing with the catapult and the arrestors reduces the length of the carrier and therefore its tonnage and cost.

To operate Short Take Off/Vertical Landing (STOVL) combat aircraft like the Sea Harriers, it is useful for the carrier to have a ski jump at the front end of the flight deck to assist short take-off, which obviates the need for a vertical take-off. Vertical landing (that uses up more fuel and reduces endurance) dispenses the need for arrestor wires. Dispensing with the catapult and the arrestors reduces the length of the carrier and therefore its tonnage and cost. In this case, the Airborne Early Warning task has to be performed by dedicated AEW helicopters like the Russian Kamov 31.

To operate longer range, heavier armed, combat and AEW aircraft, the carrier needs to have both catapult and arrestor gear–the length of the carrier increases so does its tonnage and cost.

Given the uncertainty as to which type of aircraft would be operating 25 years in the future, carrier design has emerged in three variants:-

The concept design was similar to “Charles-de-Gaulle”, the French Carrier which was under construction at that point in time in a Naval Yard in the South of France.

The ship has an endurance of 7,500 nautical miles at 18 knots and logistic endurance of 45 days. The ship will have a complement of 1600. It can carry a maximum of 30 aircraft and 17 of these can be accommodated in the hangar. Air operations can take place up to sea state 5. The ship will have two tramlines for take off and a landing strip with 3 arrester wires.

The design is being undertaken by the Navy’s own Design Bureau. The preliminary design has already been completed and detailed design is in hand. The ship will be built using IHOP (Integrated Hull Outfit and Painting) method using high strength ABA grade steel developed in house between DRDO and SAIL. The ADS will require about 20,000 tonnes of steel.

The inputs in respect of MIG-29 K aircraft will be provided by the Russian side who will also assist in the associated design work for aviation facilities such as Flight Deck, Hangar, Aircraft Lifts, Ammunition Lifts, Aircraft Launch & Recovery systems, etc.

The ADS, however, in its conception and final execution of plans, has had an interesting journey. Conceived initially on the lines of a large carrier, plans for its building were scaled down considerably (in the early 90s) when it was re-envisioned as a ‘Small Harriers Carrier”. This was only to change again in the early years of the next decade. Commodore Jitendran (presently Chairman & Managing Director of Cochin Shipyard where the Indigenous Aircraft Carrier is being built) was associated with the carrier project since the 1980s. He recalls:-

“I joined the Directorate of Naval Design as Deputy Director of the Aircraft carrier project in mid 1988. The Navy was then working for a big carrier to operate heavy fixed wing aircraft, above 20 tons All Up Weight (AUW). Being a new dimension, some assistance in the initial design was considered prudent as we had no database. Finally, in Sep 1989, a delegation of four Naval Officers was deputed to France to work along with Ms DCN on a concept design of what was then known as a “Sea Control Ship”. This concept design envisaged fixed wing aircraft to be operated from a large carrier with French collaboration.

We had a complete concept design which essentially described how the ship would look like, its main features, approximate cost and timeframe to build it in India.

The concept design was similar to “Charles-de-Gaulle”, the French Carrier which was under construction at that point in time in a Naval Yard in the South of France. The main difference was that the French Carrier was nuclear powered, whereas our Indian Carrier envisaged gas turbine propulsion.

We returned from France in Mar 1990. We had a complete concept design which essentially described how the ship would look like, its main features, approximate cost and timeframe to build it in India. A report was also rendered on the augmentation required in Cochin Shipyard to build the ship of that type. This concept design documentation was presented in the Navy and the MoD. The high level visiting French Delegation then gave a very informal indicative price of about Rs 2500 Crores for delivery of the ship in 2002, complete in all respects except for aircraft.

We were told later on that there was a serious financial crisis and that there would be no money for the Sea Control Ship.

There was a focus and resurgence in the thinking that we need to really have a blue water navy with heavier types of aircraft.

The delivery cost of Rs 2500 Crores was considered frightfully expensive. Adm Ramdas, took over as CNS and the slogan put out was to achieve “Much more with Much less”. This actually applied to the carrier project to a large extent, with the displacement of the ship coming down from 40,000 tonnes to less than 14,000 tonnes of a small Harrier Carrier. The CNS had gone to Italy and when he came back the 14,000 tonne GARIBALDI size appeared appropriate because of the crisis of money. So the design process actually took a U turn and we started to design a ship smaller than the existing INS Viraat.

Later on, the Soviet Union broke up and the carrier project fell into the ‘backburner’ status. There were a lot of officers who did not support the size coming down so much. There were intense debates about the requirement of fixed wing aircraft. So the project virtually died for a period of about 8 years in the early and mid 90s. In 1998, we started again on designing a much larger ship. There was a focus and resurgence in the thinking that we need to really have a blue water navy with heavier types of aircraft.

There was also a strong feeling that the Harriers would not be the future for “Sea Control” and even though we went ahead with the subdued nomenclature “Air Defence Ship”, the ship which we were designing was almost similar in size to the one which we had earlier abandoned but it had added features like ski jump, options to operate aircraft upto 22 tons AUW.