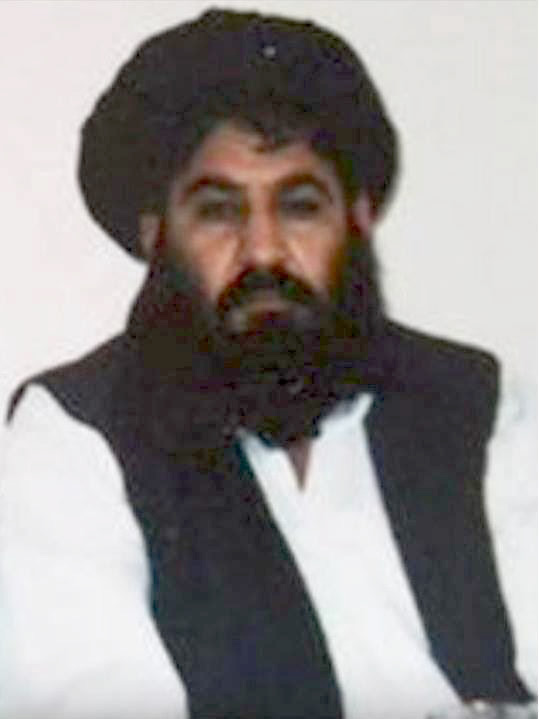 Mullah Akhtar Mansour head of Afghan Taliban was killed in a US drone strike on the afternoon of 21 May 2016near Ahmad Wal town on the main highway connecting Quetta along Afghanistan-Pakistan border.As per the widely circulated story the Taliban leader had earlier crossed over from Iran through the Taftan border check post between Iran and Pakistan, located approximately 500 kilometers away. A Pakistani passport and identity card recovered from the site of attack revealed his identity as Wali Mohammad son of Shah Muhammad. The passport had a valid Iranian visa and he had proceeded there in end March 2016 and was returning to Quetta, known Headquarter of Pakistan based Afghanistan Taliban.

According to a statement attributed to US secterary of state John Kerry, on an official visit to Myanmar, Mansur posed a “continuing, imminent threat” to US personnel and Afghans. “If people want to stand in the way of peace and continue to threaten and kill and blow people up, we have no recourse but to respond, and I think we responded appropriately”. President Obama echoing similar views stated that “Mansour represented a special threat to United States and its forces”.

Mullah Mansour had, since taking over the reins of Taliban in July 2015, consolidated his hold over the outfit.An audacious attack targeting Afghan government intelligence building in April had resulted in 64 deaths and 347 injuries. Simultaneously Taliban had been making inroads into Afghanistan attacking government forces and gaining territory and indirectly threatening the legitimate government of President Ashraf Ghani.

The Quadrilateral Cooperation Group (QCG) set up to negotiate peace with Taliban failed to make any progress due to Taliban’s refusal to join the negotiations. Pakistan too failed to bring Taliban to the negotiation table, inspiteof a widely known belief that it wields considerable clout over the outfit since its leadership is entirely based in Pakistan.Sartaz Aziz, Pakistan’s foreign affairs advisor admitted in Washington on 01 March that Pakistan houses Afghan Taliban but expressed his inability to bring them to negotiating table.

Afghanistan President Ashraf Ghani had relied heavily on Pakistan to bring Taliban to negotiation table and restore peace. His helplessness was evident in a speech where he stated “We expect Pakistan to honour its commitments in the Quadrilateral Coordination Group and take military action against those who, according to our security institutions and the intelligence services of our allies, are operating out of Pakistan.” He had demanded action against the leadership of Afghan Taliban, believed to be based in Pakistan.

The US State Department echoed similar sentiments when it stated that “We have consistently expressed our concerns at the highest levels of the government of Pakistan about their continued tolerance for the Afghan Taliban groups such as Haqqani Network operating from Pakistani soil”.Numerous other US statements also pointed to the inability of Pakistan to prevail over Taliban to negotiate for peace in Afghanistan. As is well known Taliban functions as an extended arm of Pakistan’s military establishment which has wanted to have a pliant and proxy dispensation in Afghanistan.

The frustration of USA had been obvious forcing it to react in the manner that it didto clearly send a message to Taliban and Pakistan. According to a report in New York Times, USA had told Pakistan that Mullah Mansour was a target. Pakistan did reveal his general location but his precise whereabouts were revealed through US signal intelligence, satellite imagery and human intelligence.  USA used its Joint Operations Command to target the Taliban chief in preference to CIA covert operations with whom Pakistan’s army has been cooperating to deny any claim that it had been consulted. It is also for the first time that USA has targeted Afghan Taliban inside Baluchistan, its earlier drone strikes against Taliban having been carried out on FATA’s semi autonomous tribal areas.Interestingly the USA has so far officially not designated Afghan Taliban as a terrorist group.

Another viewpoint emerging is that Pakistan provided limited information on general whereabouts of Taliban Chief and would be happy to see him being eliminated since he had followed an independent course for activities in Afghanistan.

The Afghan Taliban confirming the death of Mullah Mansour has decided to appoint Maulawi Haibatullah Akhundzada, a religious scholar as his successor after he was unanimously voted by the leadership council members. Sirajuddin Haqanni whose contacts with Inter-Services Intelligence (ISI) are well known and Mullah Yakub, son of Mullah Omar would be the deputy supreme leaders of the group. The statement by Afghan Taliban after appointment of new leadership also stated explicitly that death of its leader would not have any effect on the insurgency in Afghanistan. Sirajuddin Haqqani has been leading a more aggressive fight against the Afghan government by carrying out violent attacks inside Afghanistan, including Indian interests.

The killing of Mullah Mansour has been welcomed by President Ghani whose office stated on Sunday 22 March that it could open door to talks. Similar views were expressed by the US where States Department spokesman Mark Toner said “it sends the message that Taliban must decide what its future is going to be and whetherit’s going to be part of a peaceful political future for Afghanistan”.

At things stand today it is unlikely that killing of Mullah Mansour will bring any peace to the troubled region as long as its chief mentor Pakistan is unwilling to see reason and stop support to its proxies and violent activities in Afghanistan.It is also unlikely that Afghan Taliban leadership targeted by USA would be ready to negotiate at its terms. To the contrary the coming summer months are likely to witness an increase in violent activities to show as to who is the dominant force in Afghan landscape.

Another interesting piece of evidence recovered through the passport close to the killing reveals that Mullah Mansour in guise of Wali Mohammad had travelled abroad 18 times beginning 2007 mostly to Dubai and Iran which clearly shows Pakistan’s hand in nurturing Taliban leadership and facilitating their activities. The new Taliban leadership is likely to be similarly mentored to follow a path as chartered out by Pakistan’s military establishment.

USA with close to two decades of experience fighting in Afghanistan is still unable to fathom that there is no good or bad Taliban. The road to peace can be laid once all stakeholders move unilaterally to stop violence and sit across table to negotiate. But for that to happen Pakistan would need to see reason to climb down from its inflexible position.