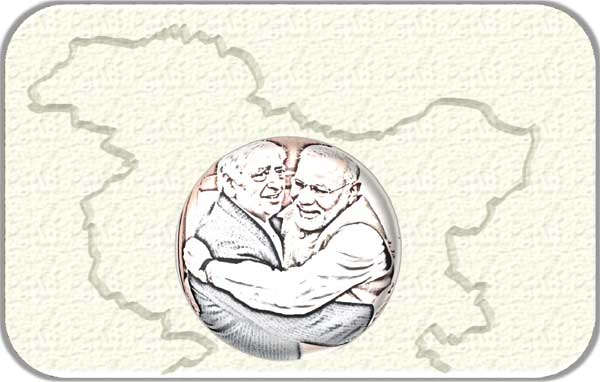 Despite its splendour and idyllic environs, Kashmir continues to evoke images of conflict, dissent and discord- the conflict which has been raging for decades, both ‘for’ and ‘within’ the state arousing embittered emotions. Having said that, Muslim dominated Kashmir ‘was’ and ‘remains’ secular India’s Achilles heel, and the manner the socio-political future unfolds after the taking over of the PDP-BJP combine, can either take ‘progressive’ India, and with it the state forward, or keep it entrapped in the quagmire it has been mired in since partition/independence.

…the PDP and the BJP must get their act together and collectively work towards mitigating decades of distrust and discord.

Notwithstanding its turbulent past and despite the tilt shown towards the Hurriyat and Kashmiri separatists by Mr. Mufti, the new Chief Minister in the conference following his swearing in, it would be premature to pronounce the failure of the (unique) Modi-Mufti experiment even before it has been able to hit the blocks – peace needs to be given a chance!

Now that the dice has been cast, that too after protracted negotiations, the PDP and the BJP must get their act together and collectively work towards mitigating decades of distrust and discord. Both parties need to introspect, and define/redefine red lines, especially in the public conduct of their leaders. On one hand, it is for the PDP to realize the importance of Mr. Modi flying to attend the swearing in ceremony in view of its uniqueness, at the same time, it is for the BJP who may have not expected such a public embarrassment, to re-work its strategy. Having said that, both know that they cannot survive in power without the other; thus the importance of Red Lines in this unique relationship. Both parties also need to realize that they are there only because of the mandate of the people and the public cannot be let down after both sides had offered much promise and hope in their election campaign.

It is also important to interject that keeping in view of the larger strategic context of Kashmir in terms of the embittered Indo-Pak relations, the terse Sino-Indian relations, and the (growing) potential of the Sino-Pak collusion, especially with China’s enhanced involvement in the volatile region of Gilgit-Baltistan, New Delhi would do well to concentrate on securing India’s strategic future. Foreign Policy being the domain of the centre, this needs to be made clear to Mr. Mufti and his political heir, Ms. Mehbooba Mufti, and needs to be ensured by the BJP in J&K, being the second largest party in the ruling combine.

Mr. Mufti may have his compulsions, but advocating the case for separatists is unwarranted.

The story of Kashmir, unfortunately is one of innumerable follies and missed opportunity and the acrimony we see is the aftermath of six decades of conflict and strife. The first in the long list was the manner the barbaric tribal (sic) invasion of 1947 was handled which ipso facto resulted in the longest (fourteen months) and infructuous (from India’s point of view) shooting war Independent India has ever engaged in. Another opportunity came India’s way after the 1971 war to close the dispute once for all, but for some reason this was never taken up; indeed even the Shimla Accord was a considering India’s exponential advantage.

Later, murky politics of the seventies and eighties were allowed to muzzle democracy, and with it hope in the people of the state. The decay of the political system in Kashmir, as indeed, it was the case in the rest of India, exacerbated by the ‘coalitions of opportunity,’ became yet another reason for the people of Kashmir to lose faith in the power of the ballot. As pronounced by Mr. Sumit Ganguly: “The singular political tragedy of Kashmir’s politics was the failure of the local and national political leaderships to permit the development of an honest political opposition…..As a result of local chicanery the national laissez-faire, every election, except two (1977 and 1983), since the first in March 1957, was marked with corruption and deceit.” Now that the state had witnessed ‘free and fair’ elections, in which the people’s participation has been unprecedented, the expectations of the people are sky high.

Both parties would do well to conduct themselves as mandated by the people and close the ugly part of the state’s recent history and get on with the task of governance and meeting the aspirations of the people as also bringing the state to the mainstream through well focused and sustained development.

Mufti’s advocacy of the Hurriyat needs to be denounced as the Hurriyat is nothing but a front of Pakistan and her sponsored separatists.

Mr. Mufti may have his compulsions, but advocating the case for separatists is unwarranted. Having said that, in all fairness to the new Chief Minister, there is another side to the coin which merits attention. While it may be fashionable for New Delhi to brand all calls for ‘Aazadi’ to be separatist, within this cacophony are entrapped cries that need to be understood in a humane manner. For the average Kashmiri, caught up in a life of strife and conflict, which to a large extent is not of his making, the only ‘Aazadi’ he/she yearns for is to lead a life of ‘dignity’ without the fear of the gun and without transgressions made in his/her personal space, family and way of life – these primordial calls need to be heeded to. However, at the same time, shrill voices spreading discord and hate in whatever form need to be dealt with under the law of the land.

If Mr. Mufti is advocating the former’s case, admittedly, he has a point that merits attention. Conversely, his advocacy of the Hurriyat needs to be denounced as the Hurriyat is nothing but a front of Pakistan and her sponsored separatists. In case Mr. Mufti feels otherwise, he needs to present their case cogently and dispel New Delhi’s apprehensions.

Though the BJP essentially represents the people of the Jammu region, it needs to take up the interests of other parts of the state for the larger collective good of the people. Having said that, the PDP also needs to introspect, and now that it is in the driving seat, work towards genuine development of the state – not merely speak for the people of the Valley. Both parties need to rise above petty politicking and pursue development as a tangible goal. It may be pertinent to recount that the state’s highest GDP growth was recorded in the post 1971 war period, which proves that the state has the potential to excel when the environment is free of conflict; in fact, this was the only period when the state’s GDP rise was above the other, so called ‘progressive’ states of the Indian Union.

WHAM needs to continue to focus on eradicating ‘inner’ grievances in a fair and transparent manner, and at the same time, mitigating ‘external’ (Pakistan’s) influences within for instilling a sense of ‘security’ for its citizens.

Winning the Hearts and Minds (WHAM)

On its part, while ensuring good governance should be the focus, furthering the work done by the WHAM campaign thus far needs to be given priority by the new government. WHAM needs to continue to focus on eradicating ‘inner’ grievances in a fair and transparent manner, and at the same time, mitigating ‘external’ (Pakistan’s) influences within for instilling a sense of ‘security’ for its citizens. It needs to be underlined that WHAM, being a long term campaign, cannot and should not be reduced to episodic responses and/or made a publicity campaign for short term narrow gains. This takes time and perseverance for it to succeed. Apropos, the target populace and theme(s) need to be well thought out and actions well executed on ground. More importantly, WHAM needs to concentrate on ‘conflict and violence’ avoidance, and the new government needs to bring in change by involving the people. The task of identifying and providing fillip to the theme(s) and setting priorities is therefore the main challenge for the government in Srinagar.

In terms of themes for the WHAM campaign, ‘all inclusive’ and ‘all round development’ should be the focus. With a supportive party like the BJP, both in the centre and state, and Mr. Narinder Modi seen as a harbinger of change, the stage is perfectly setfor ushering in an era of well-directed and sustained development. This advantage must be leveraged by Mr. Mufti. Kashmir and Kashmiris of all regions should be made self-dependent and prosperous, which calls for large scale infusion of capital for time-bound action plans, the emphasis being on involving the youth productively – this is where the Prime Minister could make a major difference.

One thought on “Kashmir’s Historic Moment: Giving Peace a Chance”