Home  >  Spotlights  > Geopolitics  >  It’s going to be a long eyeball-to-eyeball standoff with China: But India is well prepared

It's going to be a long eyeball-to-eyeball standoff with China: But India is well prepared 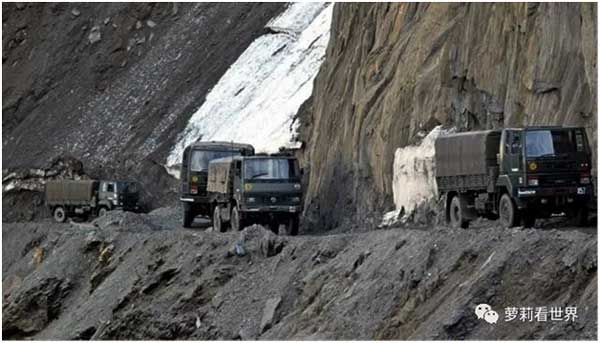 After exactly 53 years since September 1967, of being reactive on the ground to thousands of moves/attempts by China’s Peoples’ Liberation Army (PLA) trying its tricks to grab India’s land, Indian Army finally responded with some unprecedented “redeployment of troops” on the Line of Actual Control (LAC) to evict the PLA from some key heights and tactically advantageous positions and occupy them. To say the least, the Chinese are shocked as they are seeing a reversal of roles.

For over six decades, the Chinese always bullied on the table and bulldozed on the terrain, always grabbing and gobbling or trying to grab further chunks of Indian territory. Many parts of current China were independent sovereign nations, the largest being Tibet. In fact, all of the India-China boundary is what China captured and refers to as Tibet Autonomous Region.

An official press release stated that on the night of 29/30 August 2020, PLA troops violated the previous consensus arrived at the military and diplomatic engagements during the ongoing standoff in Eastern Ladakh and carried out provocative military movements to change the status quo. Indian troops pre-empted this PLA activity on the Southern Bank of Pangong Tso lake undertook measures to strengthen India’s positions and thwart Chinese intentions to unilaterally change facts on the ground. The Indian Army is committed to maintaining peace and tranquillity through dialogue but is also equally determined to protect its territorial integrity. Till September 3, four Brigade Commander level Flag Meetings have failed to resolve the issues.

It has been seen over seven decades that talks are an old trick of the Chinese Communist Party (CCP) and PLA combo, with the aim to buy time and very often not following any agreement. Nonetheless, the Indian government and Indian Army have always been amenable to talks for the sake of peace and tranquillity; even so after the PLA shattered every peace agreement, and which was seen from May 5 to June 15, 2020. Lies and deception have been part of the CCP-PLA combo’s standard operating procedure or rather, its very philosophy.

Ever since the PLA freaked out in May 2020, the Indian Army was rather reticent in sharing some realities, that too at a time when some much overdue and never before like decisions and actions were taken, shocking the Chinese like never before and breaking the jinx of the Indian Army that they only react, and that too with one hand tied behind their back.

Col. Danvir Singh (Retd), Associate Editor, Indian Defence Review, who served as a Company Commander in the Chushul Garrison in 2004-2005, needs to be thanked for an elaborated version of what transpired before and after August 29, which shocked PLA like never before and surprised the world.

In early August, the newly inducted Mountain Division, including Tibetan troops of the Special Frontier Force (SFF), was fully acclimatized. They had begun reconnaissance and validated their offensive plans which were so secret that even the holding formation troops were unaware of what was going on. Options were carefully drawn and diligently vetted.

By August 24, one plan was finally given the go-ahead. The plan involved the retaking of certain commanding heights by evicting the Chinese forces. Simultaneously, the Chief of Defence Staff, General Bipin Rawat, cautioned the nation to stay prepared for any eventuality, even if that meant war.

The final phase of the retaking of the objectives was planned to be completed in 120 minutes flat. Tanks, artillery guns/missiles and air defence were all well poised to counter and destroy any PLA attempt to thrust into the Chushul Valley. Air defence troops were also deployed with shoulder-fired anti-aircraft Igla missiles, networked and coordinated to shoot down any Chinese aircraft interfering with the advancing troops.

The Chinese on their side had their mechanized Combat Team located in Spangur near Moldo. They had 33-ton T15 light tanks designed to fight a battle in this high-altitude region. The Indian troops, who were fully geared for action, with all ends tied, contingencies catered for and rehearsed, were ready to strike. Their objective was Spangur Bowl, an area south of Pangong and east of Chushul.

The features dominating the Spangur gap provided great tactical dominance and huge strategic advantages were Black Top, Helmet, Magar, and Gurung Hills stretching right up to Rezang La. Under the cover of darkness, Indian infiltrating troops moved up to the LAC established their release points, and waited for the green signal. Some troops mounted on high mobility vehicles drove straight up to the objective – the 3 km ridgeline on the hill alongside Requin.

At the word go, these troops crossed over into the enemy claimed territory with lightning speed and occupied the hill features, beating their own planned timings well under 120 minutes. Before dawn, one complete infantry brigade with over 2,000 troops was holding the heights overlooking the Spangur Bowl. Armed with French Milan anti-tank missiles and Carl Gustav rocket launchers, Indian troops had literally rendered the Chinese armoured tanks at Moldo redundant and outmaneuvered. On August 31, the Chinese garrison at Moldo was virtually under siege.

When the greatly shocked Chinese mustered their club-wielding troops and advanced towards the positions now held by the Indian Army, more shocks awaited them. The Indian troops warned the advancing PLA men, who continued with their advance. The Indian troops fired a few warning shots in the air and the Chinese, seeing the aggressive posture, fled, only to return a little later.

This time they came with their armoured personnel carriers, driving on their cemented road from Moldo to Rezang La. But this advance also came to a halt and was followed by a hasty retreat because the Indian troops were at a stone’s throw from the Moldo garrison, dominating each and every move of the PLA. The sight of anti-tank missiles and rocket launchers deterred the move of the Chinese armoured personnel carrier and halted them in their tracks.

The Chinese had realised that not only were they outnumbered but totally outflanked, making their position untenable. Any armed clash hereafter would have been suicidal. The annihilation of the Moldo garrison was assured. The Indians by now were firmly dug in.

Subedar Nyima Tenzin of the SFF died on August 30 when he stepped on a mine near the south bank of Pangong Tsoduring the action of occupying the strategic heights. Sending a strong message to China, the  ruling Bharatiya Janata Party (BJP) general secretary Ram Madhav attended Subedar Tenzin’s funeral, which was conducted with full military honours.

Army Chief Gen. M M Naravane, who toured Ladakh from September 2-4, said the situation along the LAC is “tense” but added that the nation can “count on us.”

Chief of the Air Staff, Air Chief Marshal RKS Bhadauria visited frontline air bases in Eastern Air Command on September 2. Respective Air Officers Commanding apprised him of the readiness state and operational preparedness of the combat units under their command. The air chief also met and interacted with air warriors serving in these units and lauded the focused efforts by the station personnel towards maintaining proficiency in all roles envisaged and urged them to continue performing their duty with due diligence.

Following PLA’s gross violation of India-China peace agreements on June 15 when they brutally killed 20 Indian Army personnel. In the Indian Army’s fierce revenge attack, without firearms, PLA soldiers – 3 to 4 times more – were killed. PLA Air Force fighter aircraft and helicopter activities heightened along the LAC.  Its fighters and strategic bombers have staged forward and have been detected flying near the Indian Territory maintaining the 10 km plus distance from the boundary. Chinese helicopters have been flying very close to the LAC in all the troubled sectors, including the Sub Sector North (Daulat Beg Oldie sector), Galwan Valley near Patrolling Point 14, Patrolling Point 15, Patrolling Point 17 and 17A (Hot Springs area), Pangong Tso, and Fingers area.

This was countered by the deployment of India’s quick reaction air defence missile, including the Akash missile, which can take down very fast-moving combat aircraft and drones in few seconds. Many modifications and upgrades have already been done in it to make it suitable for deployment in the high mountainous terrain. IAF’s fighter aircraft have also been very active in the Eastern Ladakh area. The surveillance gaps have also been plugged and no enemy aircraft would be able to go undetected India’s forces.

Soon after the Chinese transgression into the Indian territory in early May, their aircraft began entering very close to Indian air space and frequently up to their claim lines in the Ladakh sector, including a construction site close to the Galwan valley. The IAF sent its Su-30MKIs to Eastern Ladakh, where formidable air defence systems of both Indian Army and IAF has been to prevent any misadventure by PLA or/and its air force. Also reportedly, India is very shortly getting a highly capable air defence system from a friendly country that can be deployed and the entire area can be taken care of to prevent any enemy flying there.

When General Wei Fenghe, State Councillor and Defence Minister of China, made urgent requests, or as the media put it “begged India for talks,” Indian Defence Minister Rajnath Singh met him on September 4, in Moscow on the sidelines of the Shanghai Cooperation Organisation (SCO) meeting.

In the two-and-a-half hours the meeting, the Indian defence minister categorically conveyed India’s position on the developments along the LAC, including at Galwan Valley in the last few months and emphasised that the actions of PLA, including amassing of a large number of troops, their aggressive behaviour and attempts to unilaterally alter the status quo violated the bilateral agreements and was not in keeping with the understandings reached between the Special Representatives of two sides.

Indian Defence Minister Singh stated clearly that while the Indian troops had always taken a very responsible approach towards border management, there should be no doubt about its determination to protect India’s sovereignty and territorial integrity. Given the CCP-PLA combo’s record of reneging on all past peace and tranquillity agreements, lies, deceit sustained attempts at bullying India till some years ago and this meeting full of platitudes by Gen Fenghe, the immediate future of the talks appear to be bleak. While China has specialised in projection/propaganda of its military being powerful in numbers weapons and equipment, it should not be opting for an armed confrontation/war.

Indian Armed Forces are preparing for the worst and if push comes to shove, it may not be wrong at all to predict that losses on China will be heavy.

Meanwhile, the least India can expect is an extended eyeball to eyeball standoff but, for a change, with Indian Army being on some commanding heights. On September 6, when Chinese troops attempted to approach Indian troops, the latter fired warning shots in the air, of which China is making a big issue.