Israel’s geo-political location is a security nightmare for Israeli defence planners, given the hostile or potentially belligerent neighbourhood on each of its flanks. Nevertheless, for the US and the western countries, Israel is a divisive enclave in the vast Arab world. The State of Israel is a geographic divide the contiguity of the few Arab Entities – the Middle East and the North African. It is a pivot around which the Western world, particularly the US can calibrate its Middle East policy. For the countries in the Middle East, Israel is a major strategic distraction.

Israel constitutes a crucial factor in the domestic and foreign policy posturing of these countries. For an analysis of the strategic importance of Israel, most of the answers would be found in the question: “What if Israel did not exist in its present location?”

For an analysis of the strategic importance of Israel, most of the answers would be found in the question: “What if Israel did not exist in its present location?”

Israel has a 273 km coastline and is in close proximity to the Suez Canal and the Red Sea. After the 1967 War, the eastern bank of the Suez Canal became its territorial possession, which it gave up only in 1982. The strategic importance of Israel can be gauged from the fact that despite having fought the British forces for the establishment of the Israeli State in 1948, it became a military ally of Britain in the 1956 War i.e. all within a matter of eight years, when British interests in the Suez Canal were threatened. The symbiosis of the strategic interests of the US and Israel was evidenced during the 1991 Gulf War. It was the strategic leverage that the US enjoyed over Israel that prevented the latter from initiating military measures against Iraq, despite being targeted by Scud missiles.

Nevertheless, for the US, the Israeli military machine was a decisive ace up its sleeve.

With dedicated Armed Forces consisting of 1,86,000 personnel, 800 combat aircraft, 5 submarines, and attributed nuclear capability, Israel has qualitatively one of the most formidable military machines in the region, with a worldwide reputation. It has a thriving defence industry producing arms and equipment having state-of-the-art technology. It has emerged as an eminent producer and exporter of military equipment. Most of the countries, which were critical of Israel and its policies, have now begun to have defence relationships with it. Even for Iran, Israel served as the conduit for arms and spares of US origin during the Iran-Iraq War. It is a typical case of national interest prevailing over ideology.

Israel’s security perception is not confined to the threats to its peoples, territory and assets but to its very existence as a state as such.

Very few countries in the world have the kind of Diaspora support that Israel does. The nearly six million strong Jewish community in the US is known to wield disproportionately strong influence over US foreign policy especially with regard to Israel. The Jewish community is politically and economically one of the most powerful entities in US society.

Israel shares a 79 km boundary with Lebanon, 76 km with Syria, 238 km with Jordan, and 266 km with Egypt. Although the Palestinians are still to be granted independence, the borders that the State of Israel shares with the West Bank and the Gaza Strip are approximately 307 km and 51 km respectively. The boundaries, however, are disputed by Israel and are subject to change whenever the Palestinians are granted formal independence. Israel perceives itself surrounded by a vast sea of Arabs. Its security perception is not confined to the threats to its peoples, territory and assets but to its very existence as a state as such. Israel’s borders with Egypt and Jordan were formalised in the peace treaties in 1979 and 1994 respectively. Its border dispute with Syria is rather complex, as it remains imprecise due to various past events that have engendered its fluidity.

These events are: the 1923 line designated by the League of Nations, the armistice line set at the conclusion of the 1948 War, and the boundary as obtained after the 1967 War. The dispute over the precise location of the border is extremely important and contentious to both Syria and Israel. For Syria it is the question of vital access to Lake Kinneret and the headwaters of the Jordan River, which presently fall in Israel’s territory and are its primary sources of water.

The border dispute between Israel and the Palestinians is the most complex, especially because of its fluid nature owing to Jewish settlements in the last decade.

For Israel, the importance of the disputed territories including the Golan Heights under its possession is accentuated as it provides a much-required buffer zone. In the case of Lebanon, Israel maintains that it has no claim to Lebanese territory beyond the 1949 armistice line.

However, the Lebanese Government and the Hizballah (backed by Syria), refuse to recognise the UN Security Council’s determination that Israel’s withdrawal from southern Lebanon in May 2000 was complete and up to the international boundary. The security of Israeli settlements abutting the Lebanese border remains a pressing concern for Israel.

Despite having expanded its territory over the years, Israel still has a problem of strategic depth.

As and when the borders are formally delineated consequent to the Palestinians statehood, some major teething problems may be encountered. This may involve the degree of physical separation between Israelis and Palestinians, an agreement on the status of Jewish settlements in Jerusalem, and other concerns such as water. A number of underground aquifers straddle the boundaries between Israel and the area under the Palestinian Authority. Israel’s densely populated coastal plains are overwhelmingly dependent on this water for agriculture and industry. Already, Israel accuses the Palestinians of constructing illegal wells that siphon water from the aquifers.

Despite having expanded its territory over the years, Israel still has a problem of strategic depth. Moreover, it is very densely populated. A war on its own territory could have pernicious repercussions. Appropriately, its war doctrines are based on pre-emptive actions and fighting war in the territory of the belligerent. Its doctrine emphasises on removing potential causes of war, such as interference with Israeli freedom of navigation in the Strait of Tiran, acquisition or manufacture of a nuclear bomb by any Arab country, and the militarisation of the Sinai Peninsula.

Even though Israel has a strong military capability, it cannot ignore the cumulative strength of its existing and potential adversaries. The qualitative military edge that it enjoys vis-à-vis its neighbours is rapidly shrinking, as they continue to acquire modern arms and strategic weapon systems like long range ballistic missiles.

A comparative data of the military strength of Israel and its neighbours is as under: 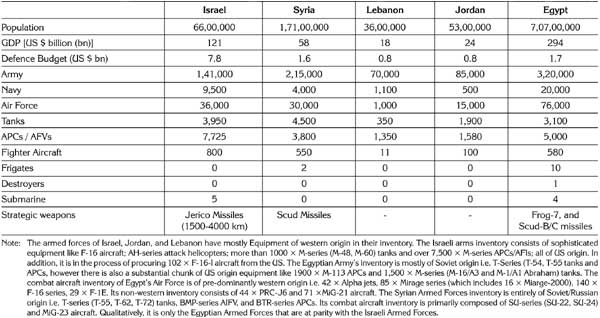 Many analysts aver that the threat to Israel is not only from its immediate neighbours but also from other countries of the Middle East. Iraq, which once posed a grave threat, may temporarily not be a factor, however Iran is a threat in being, especially on account of its long range missile capabilities and clandestine nuclear weapons programme. As it is, Israel has been accusing Iran of being a state sponsor of anti-Israel terrorism. The spectre of acquisition of nuclear, biological and chemical weapons by Israel’s adversaries, some analysts believe, is not far fetched, considering their relatively easy availability after the break-up of the Soviet Union.

Though the annexation of additional territories like the West Bank and the Gaza Strip in the 1967 War, has given some amount of strategic depth to Israel, they however, are also a source of instability. As long as the Golan Heights remains under Israeli occupation, the Israel-Syria relations will continue to be inimical. And since Syria presently does not have the militarily capability to force a decision on the issue it shall continue to encourage anti-Israel Islamic terrorists groups like the Hizbullah to keep Israel unsettled.

The Palestinian society can be categorised into two groups. There is a pacifist group, which feels that co-existence with Israel is the only practical solution…

The West Bank and Gaza too have cost Israel a great deal in terms of internal security and peace. Israel may have been compelled to create Jewish settlements in these territories due to a fresh inrush of Jewish immigrants in the ‘90s, but it has only created apprehension and resentment amongst the Palestinians, which has provided an emotive issue for their terrorist activities. Considering the cyclic pattern of suicide bombings that unfailingly followed every peace initiative, it appears that groups like Hamas have been working to a strategy.

The Palestinian society can be categorised into two groups. There is a pacifist group, which feels that co-existence with Israel is the only practical solution; the other group, which constitutes the extremists, feels that the interests of Palestinians and Israel are irreconcilable and, therefore, a Palestinian homeland can only be regained by the destruction of the State of Israel. That the Palestinian Authority has been unable to reign in Hamas, despite having a 45,000-man uniformed organisation, evokes suspicion with regard to the symbiosis of their relations. Both Israel and the US refused to negotiate with Arafat whom they suspected of having links with terrorists. 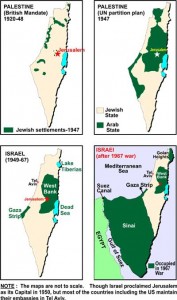 Some western analysts regard even the PLO as a terrorist organisation, despite its observer status in the United Nations. The most active anti-Israel terrorist groups are:

Most of the countries, which were critical of Israel and its policies, have now begun to have defence relationships with it. Even for Iran, Israel served as the conduit for arms…

Construction of a 115 km security barrier by Israel inside the West Bank has been going on since 2003. It is called the ‘seam zone’. A similar barrier already exists inside the Gaza Strip. This barrier is a combination of concrete wall, fence and earthworks. The concrete wall is nearly 13 km long and 8 metres high and circumscribes Qaliqiliya and Jerusalem. The estimated cost of the construction of the wall is US $ 1.7 million per mile. There is overwhelming support from the Israeli people for the barrier as they feel that it will bolster their security. Many Israelis maintain that there has been a decrease in terrorist violence ever since the construction of the barrier has been undertaken. 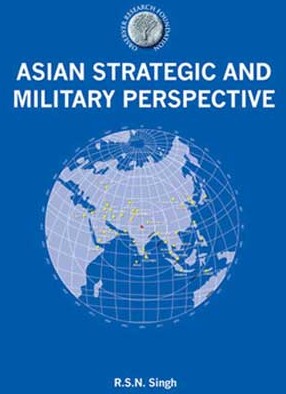 For the Palestinians, however, it has created new problems and hardships. The route the security fence was expected to follow was the 1967 Green Line but in effect it does impinge on Palestinian territory. It is believed that due to the alignment of the barrier, Israel may end up usurping 10 per cent of Palestinian territory. The barrier has cut off some Palestinian towns and farmlands. Palestinian farmers have to seek permits to attend to their own farmlands. In October 2003, a Security Council resolution, declaring the barrier illegal was vetoed by the US, on the plea that the resolution did not condemn terrorist attacks by Palestinians groups. Further, citing security reasons, Israel occupied areas that had been ceded to the Palestinian Authority by the 1993 Oslo Accord. The Rafah Refugee Camp on the Gaza-Egypt border was bulldozed in May 2004 (Operation Rainbow), as the Israeli authorities maintained that numerous underground tunnels had been created in the area for smuggling of weapons.

One thought on “Israel’s Threat Perception”