Post 2001 MOD 26 percent FDI has been allowed in defence production to foreign OEMs. This does not seem to encourage long term partnership and provide incentive in terms of Return on Investment.

Therefore at least 50 percent FDI be allowed in warship shipbuilding and potential JV’ with major foreign shipyards be seriously explored.

India is a late entrant to the club of offset policy though it did enter into a large no. of license agreements for aircraft, frigates since the mid-sixties. This has enabled India to build significant manufacturing capability in the above deliverables, missiles, defence electronics, strategic material etc11.

It would be seen that these likely contracts would offer offset benefit of around $1B. These opportunities are only going to soar up.

The formal offset policy introduced in 2005 included in its scope direct purchase of products and services, ROH arr(s), FDI, JV, Co-production initiatives to bolster manufacturing and design capability. It was limited to direct offset i.e. defence specific which has been amplified to include civil aerospace and home land security products in DPP-2011.

Of the 12 offset contracts signed so far for $2.1 B, the naval segment accounts for 34 percent. The first offset contract was infact for Navy’s acquisition of three fleet tankers from M/s Fincanteri, Italy at a cost of Rs. 800 Crores. The offset liability in respect of the first fleet tanker has been discharged 50 percent, while the tanker has been delivered in Feb 2011.

The other major contract is LRMRASW aircraft from Boeing where the offset expectation is around Rs. 3205 Crores.

The offset realization is so far is towards sub-contractorisation of low end products and services, ROH facility, simulators, training etc. and has not aroused OEMs interest for forging JVs, investing in FDIs in any substantial measure.

The major reasons that get flagged for such tepid response are low FDI cap, and non inclusion of technology transfer for offset credits.

In the context of shipbuilding sector, the need for bolstering design and development capability, infrastructure have been brought out at paras 5.1 and 5.2.

The need for increasing FDI to 50 percent in the warship building sector and 100 percent in civil shipbuilding, recognizing shipbuilding as an infrastructure sector of the economy have been highlighted. Potential areas where we could profit from FDI have also been flagged.

There is a need to kick start private public partnership in the shipbuilding sector as major private shipyards like Pipavav, ABG and Bharati and L&T often take an adversial posture vis-à-vis defence shipyards. The private shipyards, despite their good facilities, are seriously hamstrung in terms of design and development capability and in integrating major subsystems, where defence shipyards like MDL, DGND, DG WESEE have a definite advantage. However, for achieving global standards in niche technology, construction of submarines, frigates, shipyards like MDL have considerable distance to catch up.

The way forward seems to be public private partnership, JV arr(s) with reputed foreign OEMs with 50:50 FDI participation and bolstering our indigenous R&D capability. The acquisitions in naval system in the pipeline are as under:- 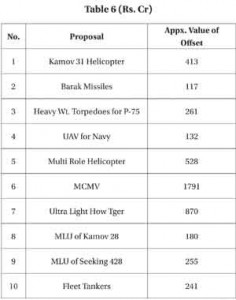 It would be seen that these likely contracts would offer offset benefit of around $1B. These opportunities are only going to soar up. There is a definite need for synergy between the aerospace sector and shipbuilding sector, as a large no. of commonalities exist in systems like propulsion, weapons and sensors. DPSUs like BEL would be effective interface in areas like sensors and communication in tandem with foreign OEMs.

Some of the areas in which offset in commercial shipbuilding sector can be allowed are:

India’s offset policy must include commercial shipbuilding sector as part of its scope and treat the shipbuilding sector in its entirety. Liberalising of FDI norms, bringing in critical technology, through technology transfer investing in R&D for developing niche technology have to be assiduously followed if the twin challenges of improving our self reliance index and boosting indigenous military industry capability are to be met.

A national offset policy must be put in place to policy road map for bringing in key technology and FDI into shipbuilding, aerospace and infrastructure sectors.

The linkages between civil and military products in both aviation and shipbuilding sector must be fully harnessed. PMO must provide requite oversight and momentum to realize full potential of offset policy.