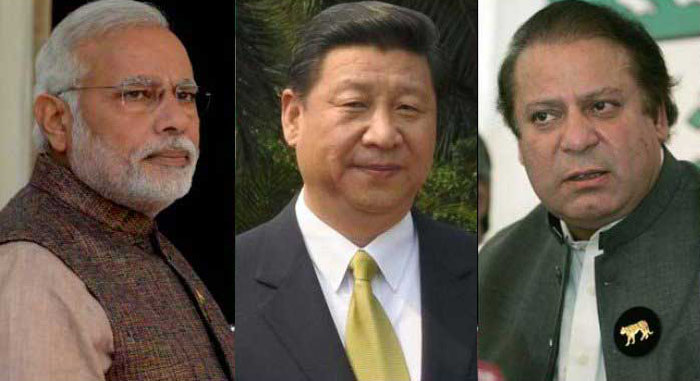 India’s foreign policy has far too long been vainly straitjacketed by pious hopes that Indian appeasement policies of the 2004-14 era towards China and Pakistan would induce moderation in their adversarial stances against India.

That hangover persisted for the period 2014-16 period till recently after incumbent Prime Minister Narendra Modi belatedly realised that all his personal diplomacy and political outreaches to China and Pakistan were not finding positive responses in neither Beijing nor in Islamabad.

The strategic reality underscoring the Chinese and Pakistani lack of positive responses being that both singly earlier and now jointly, have a strategic convergence in arresting India’s emergence as a major Power. This further gets enmeshed with both China and Pakistan feeling nervous about India’s growing strategic proximity to the United States.

While the Indian Armed Forces in their strategic thinking and contingency planning have for decades been alive to the possibility of a ‘Dual China-Pakistan Military Threat to India’, the resonance of such a reality did not find adequate echoes in the corridors of power in New Delhi nor reflected in any revised policy formulations on China and Pakistan.

The Indian policy establishment seemingly became alive and conscious to the reality of the military potency of the China-Pakistan Axis, its dangerous and disruptive implications for Indian security only after 2014. Whatever little doubt that still persisted on his score stood finally dispensed when Chinese President Xi Jinping visited Pakistan in April 2015 and announced China’s grandiose plans for the $ 52 billion China Pakistan Economic Corridor. As highlighted in my Book “China-India Military Confrontation: 21st Century Perspectives” (January 2016), with such a move China facilitated by Pakistan, had turned the flanks of India’s military postures in Ladakh and the remainder of J&K Sate. The China-Pakistan Dual Military Threat now stood concretised.

To substantiate the imperatives of India redrawing its foreign policy calculations and stances on the China-Pakistan Axis military threat to India, it becomes essential to briefly examine China’s and Pakistan’s adversarial stances against India during the period 2014-to date in 2016.

China during this period which coincided with Chinese President Xi Jinping having acquired complete control of China’s massive military apparatus, embarked on an increased number of military intrusions into Indian Territory right across India; s Northern borders with China Occupied Tibet. China began a repetition of military brinkmanship that it was following in the South China Sea.

Politically, China adopted obstructive stances on India’s admission into the Permanent Membership of the UN Security Council, more markedly and recently on India’s membership of the Nuclear Suppliers Group. China’s insistence was based on the specious argument that Pakistan also should be so admitted forgetting Pakistan’s reputation as a nuclear proliferator.

China ‘s record on not only condoning but persistently shielding Pakistan’s notorious Jihadi  terrorist outfit chief, Massod Azhar from being listed as a ‘Global Terrorist’ by the UN has stood stymied by China both at the UN and recently in BRICS Summit 2016 in Goa. Is it not despicable that China aspiring to be a Superpower and with claims to be a ‘responsible stakeholder’ in global security should be shielding Pakistan’s state-sponsored terrorism.

Moving to Pakistan, no recount is necessary as Pakistan’s incessant military and military-assisted Jihadi terrorist strikes against Indian military targets led in September 2016  to India for the first time launching ‘surgical strikes’ at Pakistan Army terrorist launching pads  as opposed to earlier border local strikes on Pakistani posts on the LOC.

The question arises as to who can rein-in Pakistan’s military provocations and military adventurism against India? Earlier, when the United States was the strategic patron of Pakistan, moderation was applied by the United States on the Pakistan Army not to push India to conflict escalation as a reactionary response and thereby endangering South Asia security.

Unlike the United States, the picture in 2016 is radically the opposite. In terms of restraining Pakistan’s military adventurism, China as the new strategic patron of Pakistan is not the solution. China is not only a part of the overall Pakistan problem for India but now with the CPEC as the prized strategic objective of China,  the stakes for China to encourage Pakistan’s military adventurism against India gets considerably raised.

It is not far-fetched in military thinking to assert the possibility that has now arisen where China becomes a belligerent with Pakistan against India just to protect its CPEC strategic investment. As reflected in my Book quoted above, it is within the realms of possibility that China declares Pakistan Occupied Kashmir and the Northern Areas as “Core Interest of China” implicit in such declaration being that China would be willing to go to war with India to protect the CPEC traversing Indian Territory in illegal occupation of Pakistan.

Therefore, in 2016, strong imperatives have emerged that India’s foreign policy formulations and perspectives on China and Pakistan need no longer  be considered as separate foreign policy planning domains but viewed as one hyphenated strategic entity

Indian foreign policy establishment viewing the China-Pakistan Axis Threat to Indian security as a potent strategic coalition ranged against India would facilitate drawing the correct deductions of India’s diplomatic and strategic responses across the board. It would also not distort India’s military force-planning parameters and requirements where when viewed singly ad-hoc measures of transferring military formations from one theatre to the other was resorted to.

No longer would India’s foreign policy planners be weighed down by distortions of examining ‘intentions’ of China and Pakistan singly. The combined intentions of China and Pakistan have to be at the core of Indian foreign policy planning for the 21st Century to counter the China-Pakistan Axis. In any case India no longer has the luxury of ‘divining’ intentions of its adversaries. India’s military postures have to be strictly related to and commensurate with the combined military weight of the China-Pakistan Axis

It also needs to be emphasised that as per current debate ongoing in India, China cannot be weaned away from Pakistan by inducing China and attracting China to make massive economic investments in India with the hope that such inducements would soften China’s adversarial stances against India. Short of India capitulating and surrendering to China’s demands on Indian territories claimed by it there are no optimistic indicators to suggest otherwise.

Concluding, it needs to be stressed that the China-Pakistan Axis Military Threat to India is “REAL” and a threat that will persist as a formidable challenge for India militarily. This ‘Threat” has all the ingredients to intensify as India ascends further upwards on the global power trajectory. India should depart from the 1962 syndrome of ascribing pious intentions to China when it comes to India’s National Security and India’s National Honour.