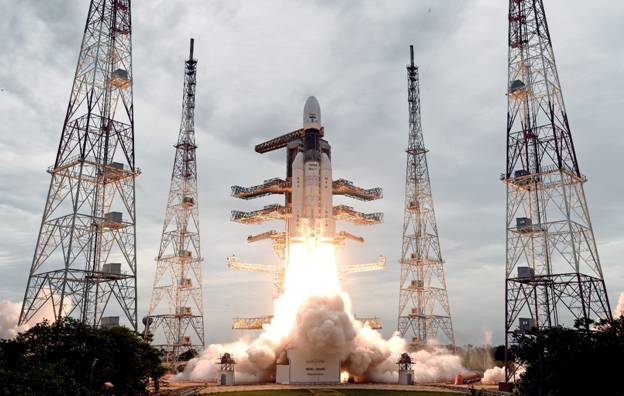 The year 2017 was a watershed in the long march of space research in India when Indian Space Research Organisation (ISRO) achieved twin landmarks. Firstly, on 15 February 2017, it, created a world record by launching and successfully deploying 104 satellites of seven countries USA, Israel, Kazakhstan, Netherlands, Switzerland, United Arab Emirates including India on board the 39th flight of Polar Satellite launch Vehicle C37 (PSLV), beating the old record held by Russia of 37 satellites in single mission. The second glorious milestone was launching of most powerful rocket, Geo Synchronous Launch Vehicle Mark lll fondly called Fat Boy by project scientists on 05 June 2017 carrying 3,136 Kg GSAT 19 heavy satellite with communication transponders and deploying it. By so doing the ISRO defied a ban imposed upon it on the supply of cryogenic rocket engines by space powers.

Another dream project as declared by Prime minister from ramparts of Red Fort on 15 August 2018 , will be launch of Gaganyaan, a manned space carrying Vyomnauts to outer space and bring them safely back on 15 August 2022 to celebrate 75 years of Independence. The Space research in India dates back to Vedic era, as old sages were experts in Astronomy and study of various constellations in determining the fate of an empire, group or an individual. Celebrated Astronomer mathematicians, Aryabhata in 500 CE and Bhaskar in 630 CE had calculated rotation and revolution of earth around the sun along with movement of other planets. Jantar Mantar meteorological observatories were constructed in Jaipur and Delhi by Rajput Kings. Indian scientist like Dr CV Raman, S K Mitra, and Meghanand Saha contributed to scientific principles applicable in space research in pre independence era.  The founder fathers of modern day Space and Atomic research were Dr. Vikram Sarabhai who established Physical Research Laboratory at Ahmadabad and Dr. Homi Jahagir Baba who founded Tata Institute of Fundamental Research in 1945. Later, the Indian National Committee for Space Research was formed by Dr. Vikram Sarabhai, under Department of Atomic Energy Commission (DAE) in 1962 with approval of then PM Jawahar Lal Nehru. The committee was later renamed as Indian Space Research Organisation (ISRO) in 1969.  Space commission as an independent organisation under Department of Space came into existence in 1972. Thus, space research activities were institutionalised under ISRO and controlled by PM through Department of Space (DOS).

The first office of ISRO was established in Saint Mary Magdelene Church at Thumba Thiruvanthpuram, Kerala. Aryabhata was the first Indian made satellite by ISRO which was successfully established in orbit by a USSR Soyuz rocket on 19 Apr 1975. Rohini, a meteorological satellite was launched in orbit by Indian Satellite Launch Vehicle (SLV 3) in 1980.ISRO progressed by leaps and bounds and successfully launched project Polar Satellite Launch Vehicle to launch satellites in polar orbits and Geosynchronous Satellite launch Vehicle for placing heavier payloads in to higher geostationary orbits. These rockets have launched numerous communication satellites, and Earth observation satellites, Navigation systems like GAGAN, INRSS have been deployed in January, 2014 and later same year ISRO used an indigenous cryogenic engine CE 7.5 in GSLV D5 launch of GSAT14, a remarkable achievement.

In the present day, ISRO is the national space agency of India with its headquarters at Bengaluru, Karnataka. Its chairman is Dr Kailasavadivoo Sivan, a celebrated and dedicated aero space scientist who also holds appointment of Secretary Department of Science. It is the primary agency to perform tasks related to space applications, space exploration, space research and development of space related technologies. It is rated as one of top five government space agencies in the globe which has acquired reliable launch platforms, mastered Cryogenic engines technology and launch of interplanetary missions. The total human resources employed in the organisation is 17, 222 dedicated scientists/technical and administrative staff. The Annual budget of the agency is 2 billion US dollars.

The first lunar mission was launched by India, fourth nation in world to accomplish it, on 22 October 2008 with a aim to reach lunar orbit and be in the orbit for 2 years and also sent a impactor to land on moon south pole. The payload was ferried to lunar orbit by PSLV XL C11. The spacecraft was inserted in the lunar orbit on 8 November 2008 and on 14 November 2008, the Lander stuck near crater Shacklenton on moon, making India the 4th country in world to place its insignia on moon. The point of impact was named Jawahar point. The cost of the project was Rs 386 crores. The mission was finally terminated on 28 August, 2009. It gave a great boost to India’s space programme.

The second and more advanced was christened as Chandrayaan 2 was launched at 1443 h on 22 July 2019 on board GSLV Mark lll from second launch pad of SDSC  Srihaikota .The total payload was almost 4000 Kg. The indigenous mission comprised of an Orbitor, Lander (Vikram) and a six wheeled rover (Pragyan), The cost of the project was approx 800 crores. The mission objective was to initially place Orbitor in the lunar orbit and then release Vikram with rover to soft land on surface of moon and finally Pragyan to roll down on surface of moon and move for probe. The Orbiter was placed in orbit on 20 August 2019 and the Lander was detached in time but in the last 200 metres, it deviated and lost control and probably crash landed on the surface of the moon. The mission was declared closed Chandrayan-2 Orbitor is still active.

The Mars mission of India was named as Mangalyaan fondly nicknamed as MOM (Mars Orbitor Mission). It was the first lndian interplanetary space probe. The mission was launched on 5 November 2013 with launch vehicle PSLV XL C-25 from Satish Dhawan Space Centre. The space craft reached Mars orbit on 23 September, 2014 after a 298 days long journey. The additional payloads on MOM were, Mars colour HD camera, Thermal spectrometer, Methane sensor, Mars exospheric composition analyser and Lyman alfa photometer. The successful mission gave an honour to ISRO of being the fourth space agency in the world to reach Mars orbit after Roscosmos, NASA and European space agency. The life of MOM was planned for 6 months but it is still live and under control forwarding close ups of the Red Planet. On1 July 2020, it transmitted a clear image of Photos a satellite of Mars.

The Indian Regional Navigation satellite System (IRNSS) is an indigenous  autonomous regional navigation system that provides accurate real time positioning of troops, vehicles, ships, submarines, aircrafts and missiles .The project has been termed as Navigation with Indian  constellation (NAVIC) . It covers the whole of India and 1500 km beyond in all directions. The first launch was on 1 July 2013 and ninth launch was on 12 Apr 2018. Presently, the constellation consists of 8 operational satellites. This system has dual use mode, open for civilian usage and encrypted for Military use. Four more satellites will be launched by 2021.The cost of the project is 315 million US $. Mobile receivers have been integrated with Navic system and soon will be available for commercial use.

The manned spacecraft flight project has been named as Gaganyaan. The spacecraft is being   designed   to carry a crew of 2/3 (Vyomnauts) aboard the flight in space and will orbit the earth for seven days and land back to Earth. The unmanned prototype was planned for December, 2020 but is likely to be delayed due to COVID pandemic.

The manned mission will take off with crew module designed by DRDO/HAL on board Fat boy GSLV Mark lll, as per schedule in 2022.