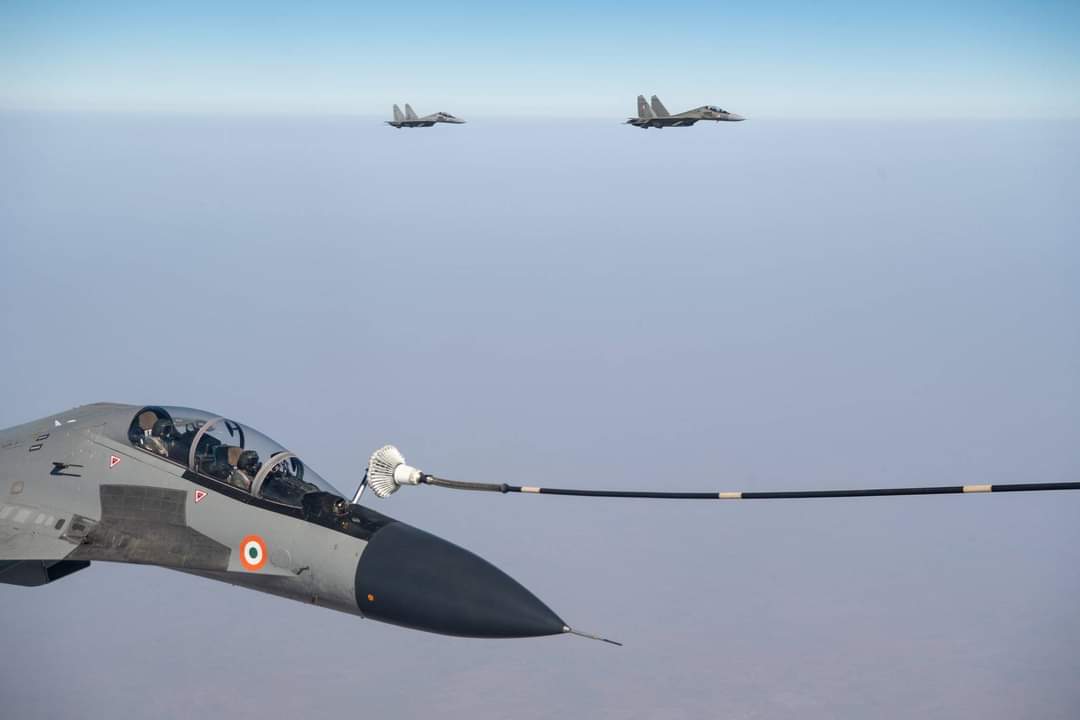 People’s Liberation Army Air Force (PLAAF) and Pakistan Air Force (PAF) regularly exercise together in the Shaheen (eagle) series of air exercises to improve interoperability. Meanwhile Indian Army and Indian Navy also take part in international exercises regularly. All these exercises are of great training value and exposure. It is pertinent to note that since newer operational equipment keep inducting and also the crew keep changing, there is thus a need to repeat the exercises every few years.

Immediately after the 1962 war, the IAF carried out one of its first international exercises “Ex Shiksha” with the US Air Force (USAF). It was an air defence exercise held at Palam, New Delhi, and there were elements tested in the eastern and western sectors. More recently, IAF and USAF started participating in a bilateral US Pacific Air Forces (PACAF) sponsored Field Training Exercise (FTX) Cope India series, conducted in India. The first such exercise was conducted at the Air Force station in Gwalior in February 2004. The exercise included air engagements, practice and demonstrations, as well as lectures on subjects related to aviation. The mutual respect and bonhomie developed between the two air forces laid the foundation for greater bilateralism. It helped both sides in evaluating their intercept techniques and tactics. The exercise was repeated in 2005, 2006, 2009 and 2018. The IAF fielded Su-30s, Mirage 2000s, MiG 27s, Jaguars, and MiG 21s. The USAF fielded F-18s, F-15s, C-130 J, among others. Exercise has also included airdropping training

IAF and FASF have been holding Garuda series of air exercises since the first in 2003 at Air Force Station Jodhpur, India. Subsequently, they were held in 2005, 2006, 2010, 2014 and 2019. The latest in 2022 was held in Jodhpur. Other locations for the exercise have included Istres and Mont-de-Marson in France and Kalaikunda in India. French and Indian Rafale fighter aircraft, French A-330 Multi Role Tanker Transport (MRTT) aircraft, Indian Su-30 MKI, LCA Tejas, Jaguar fighter aircraft, the Light Combat Helicopter (LCH), and Mi-17 helicopters participated. IAF also fielded combat-enabling assets like Flight Refueling Aircraft (FRA) and AEW&C. The joint exercises were meant to augment the “operational capability and interoperability, while also sharing best practices”.

The Indian Air Chief flew the Rafale and French Chief, the Su-30 MKI during the exercise. France is “one of India’s strongest partners” with their relationship encompassing a number of critical sectors including nuclear, defence, and space cooperation. The two countries also undertake other joint exercises namely, Shakti, Varuna, Pegase, and Desert Knight for better integration. In August 2022, a contingent of the FASF, made a strategically important stop at the IAF’s Sulur base in Tamil Nadu on their way to Exercise Pitch Black 2022 in Australia.

Exercise Pitch Black is a biennial warfare exercise hosted by the Royal Australian Air Force (RAAF) which is held every alternate year since 2006, except for 2020 due COVID-19. India began participating in 2018. The exercise is normally held in Northern Australia, primarily at RAAF Bases Darwin and Tindal. The aim of the exercise is to practice Offensive Counter Air (OCA) and Defensive Counter Air (DCA) combat, in a simulated war environment. It traditionally consists of a ‘red team’ and a ‘blue team’ based at separate locations, with one attacking the other. As inferred from the name of the exercise, it takes place in low light conditions.

The IAF participated in Exercise Pitch Black 22 in August-September. The multilateral exercise had 17 participating countries, namely Australia, Canada, France, Germany, India, Indonesia, Japan, South Korea, Malaysia, the Netherlands, New Zealand, the Philippines, Singapore, Thailand, the United Arab Emirates, the United Kingdom, and the United States. All Quad members and many from Indo-Pacific were part of the exercise which had over 100 aircraft and 2500 military personnel participating. The IAF contingent included 145 personnel, four Su-30 MKI & two C-17 aircraft. They went to Australia via Indonesia and during the transit had constructive engagements with the Indonesian and Malaysian Air Forces as well, including using a Singaporean Airbus A330 MRTT refuelling aircraft on the way.

It was the Southern Hemisphere’s largest aerial exercise. The participating forces took part in various multi-aircraft combat drills by day & night, simulating complex aerial scenarios, involving large formation, combined force engagements for enhancing interoperability and strengthening relationships in a dynamic warfare environment. It was also a training for European countries’ ability to project power into the Indo-Pacific. It was an exposure to a very large cross-section of aircraft including the F-35s.

The Republic of Singapore Air Force (RSAF) and the IAF have been carrying out bilateral exercises, codenamed SINDEX. Beginning in 2004 at Gwalior, subsequent editions were held at Kalaikunda in West Bengal and also at Paya Lebar Air Base in Singapore. The RSAF’s F-16 C/D Fighting Falcons and F-5E Tiger fighter aircraft and the IAF’s Su-30 MKI, MiG 27, Mirage 2000, and Jaguar have been participating. These exercises mark a key milestone in the growing defence cooperation between the two countries.

Exercise Indradhanush is a joint air force exercise conducted between the IAF and the Royal Air Force (RAF) The exercise started in 2006 and has held four editions so far, in 2006, 2007, 2010, and 2015. These were held in both India and the UK. India flew Su-30 MKI, Mirage 2000, MiG-27’s, FRA Ilyushin IL-78, and AWAC Beriev A-50. RAF Eurofighter Typhoons, Airbus A330 MRTT, Lockheed Martin C-130J Hercules transport aircraft and RAF Regiment paratroopers. The exercise saw multiple engagements including 1vs1, 1vs2, and 4vs4, beyond visual range (BVR), within visual range (WVR), para-dropping mission between the two air forces.

Desert Eagle is the bilateral exercise between the IAF and United Arab Emirates Air Force (UAE AF). First was held in 2008 at Al-Dhafra airbase, UAE, and again in 2016. IAF also participated in the multilateral Exercise Desert Flag VI in UAE in March 2021. Participants included Gulf nations, USA, France, Saudi Arabia and Bahrain, while Jordan, Greece, Qatar, Egypt and South Korea participated as observer forces. IAF has also been participating in exercise Eastern Bridge since 2009 with Oman. Eastern Bridge IV was held in 2022 at Jodhpur, India. MiG-29, Mirage-2000 and Jaguars participated. Oman fielded F-16s. This was the sixth edition of the exercise.

Blue Flag is a military aviation exercise held by the Israeli Air Force Ovda Air Force Base in Israel. The exercise includes several foreign air forces, aimed at expanding international cooperation. The goal of the Blue Flag training exercise is to simulate extreme combat scenarios and coalition flights as realistically as possible. In 2017 the exercise hosted air forces of the USA, Poland, Italy and Greece, and for the first time India, France and Germany participated as well.

In July 2022, the IAF carried out a one-month long engagement with the Egyptian Air Force (EAF) at the Egyptian Fighter Weapon School, located in Cairo West Air Force Base. This was a first of its kind interaction for both the air forces as it was conducted between their respective Fighter Weapon Schools. On behalf of the IAF, Tactics and Air Combat Development Establishment (TACDE) participated in the programme with three Sukhoi-30 MKI aircraft and six Combat Instructor Pilots.

The Japanese Air Self Defence Force (JASDF) and IAF participated in bilateral air exercise SHINYUU Maitri-18 in 2018 at IAF airbase in Agra. The theme of the exercise was joint Mobility/Humanitarian Assistance & Disaster Relief (HADR) on transport aircraft. The JASDF C2 aircraft along with aircrew/observers are part of this first air exercise between the two Air Forces. IAF fielded An-32 and C-17 aircraft with aircrew & observers. The focus of the exercise was set for the IAF and JASDF crews to undertake Joint Mobility/ HADR operations. Display of heavy loading/ off-loading was also practiced during this exercise.

PAF and PLAAF have participated in a series of exercises called Shaheen since 2011 to improve interoperability to respond to ‘mutual threats’. The missions have included simulated air combat, surface attack missions, air-refuelling and logistic support missions. Shaheen-I was held in Pakistan. Shaheen-II was held in September 2013 in Hotan in Western China. PAF had then sent Mirage III EA and F-7G (MiG-21 class) aircraft. PLAAF fielded J-10 multi-role fighters and J-7C. The more manoeuvrable J-10s acted as the aggressors. The three week-long Shaheen-III exercise was held in May 2014 at PAF Rafiqi airbase near Shorkot in Western Punjab.

The exercises gave both the air forces opportunity to improve specific skills and to practice Dissimilar Air Combat Training (DACT). It also allowed them to train under different threat environments and training philosophies. These exercises were of special importance to PAF as it gave them exposure to fly against Chinese Sukhoi Su-27/Su-30MKK aircraft which are similar to the IAF frontline SU-30 MKI aircraft and to help them validate their tactics. The most recent Shaheen-IX was held at Bholari air base in Sindh province in December 2020. It provided an opportunity to further enhance interoperability of both the air forces, improve the actual level of combat training and strengthen practical cooperation between the two air forces. Pakistan gets to participate in exercise Anatolian Eagle hosted by the Turkish Air Force. They also take part in other exercises in the Middle East.

The large force, bilateral and multilateral air exercises between major professional air forces requires months of planning and coordination. The planning has to factor multiple aircraft flying in confined space at very high speeds and engaging in combat manoeuvring. The pace for the exercise is set by initially doing smaller packages and increasing the degree of difficulty in a graduated manner. There is a need to de-conflict flight paths. The air engagements have to be closely controlled by ground based and airborne radars. The radio procedures have to be coordinated. The mission commanders have to be designated. Flight safety and operational issues have to be managed. Each mission must have clearly spelt out its aim and detailed briefing. There is always a detailed safety and operational debrief. The air effort must draw lessons for all air and ground crew.

In addition to enhancing combat knowledge by imbibing best practices of other air forces, it also improves interoperability. Young aircrew get exposure by flying aircraft of other air forces. Social and casual interactions help exchange ideas and imbibe knowledge. Special lectures are organised to educate the participants. These exercises are also a part of defence diplomacy. There are cultural events and exchanges. Unlike PLAAF which exercises primarily with PAF, and very few other major air forces, IAF benefits from exposure to air exercises with all the major air forces of the world. The frequency and number of air exercises has gone up in recent years. After a short pandemic related lull, the pace is picking up again. The saying “More you sweat in peace, the less you bleed in war” is best exemplified by these air exercises. India must be proud that all Western air forces have rated IAF aircrew as great professionals and very superior in their air combat capabilities.