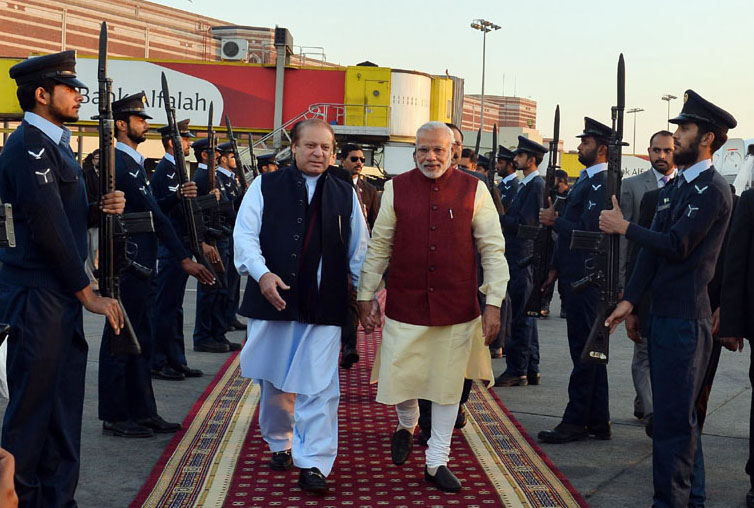 Indian Prime Minister Narendra Modi arrived in Lahore on Christmas Day for a meeting with his Pakistani counterpart Nawaz Sharif. He was received by Sharif with a warm hug on the tarmac of Allama Iqbal International Airport after his surprise stopover in Lahore on his way back home after a day-long trip to Afghanistan and a two-day visit to Russia. From the Lahore airport, Modi took a chopper to travel to Sharif’s palatial ‘Jati Umerah’ residence on the outskirts of Lahore where 11 members of Modi’s delegation accompanied him.

Given the nature of the occasion the political outcomes were modest, but encouraging.

The occasion was Sharif’s 66th birthday, and the family home was decorated with lights for his granddaughter Mehrun Nisa’s wedding. Modi and Sharif talked for about 90 minutes and shared an early-evening meal before the Indian leader flew back home.

In a series of firsts, it was the first visit by Modi to Pakistan, an unscheduled one at that and a first to the personal residence of the Pakistani Prime Minister. The last visit to Pakistan by an Indian Prime Minister was in 2004 by Atal Bihari Vajpayee, whose 91st birthday also coincided with the Lahore stopover and who is credited with bringing about a thaw in relations with Islamabad.

“Welcome to Pakistan @narendramodi. Constant engagement is the only way to resolve all outstanding issues,” was what the opposition Pakistan People’s Party Chairperson Bilawal Bhutto Zardari tweeted. Of course it is assumed that the recent diplomatic parleys have been “green-lighted” by the Pakistani Army. In India, the opposition Congress party called Modi’s visit irresponsible and said that nothing had happened to warrant warming of relations between the rivals. “If the decision is not preposterous, then it is utterly ridiculous,” Congress leader Manish Tewari said.

Such an environment could have prompted the Indian Prime Minister also to make a “soft” opening to any process of bringing the ties between the two neighbours back on track.

The two heads of government also had an unscheduled meeting at the Paris climate change talks earlier this month. Successive unscheduled meetings between the two leaders may not be a coincidence but a pointer to the internal resistance from various quarters and complex factors at play against the normalisation of relations between the two countries.

If one were to step back and take in the various power equations at play in Pakistan and the fierce political opposition towards any “inconsistent” bilateral diplomatic initiative in India, it would indicate how constrained and contested the foreign policy headroom between the two countries has become. Hence we see the National Security Advisers of the two countries meet in a third country ( Thailand) and Indian External Affairs Minister Sushma Swaraj choose the sidelines of a multilateral event ( Heart of Asia Conference in Islamabad) to recommence her engagement. Such an environment could have prompted the Indian Prime Minister also to make a “soft” opening to any process of bringing the ties between the two neighbours back on track.

Modi being what he is appears to have chosen to shape this “soft” start by firstly, making his first visit to Pakistan as an impromptu and spontaneous personal outreach to Nawaz Sharif; on his birthday and an auspicious family celebration, the wedding reception of the granddaughter.

The one step forward and two steps back nature of India-Pakistan relations require some staying power, which a good understanding between the two leaders can provide.

Two, as he had done in the case of US, UK, Japan, he is attempting to add a personal plank to the diplomatic engagement with Pakistan. While diplomacy purists would argue that foreign affairs cannot be conducted on basis of personal chemistry and rapport between heads of states, Modi has demonstrated that while personal understanding and trust may not forge new relations they can safeguard and nurture fragile diplomatic gains. The one step forward and two steps back nature of India-Pakistan relations require some staying power, which a good understanding between the two leaders can provide.

The personal relations between the two leaders, despite what was on display during the SAARC summit at Kathmandu, have been very cordial and marked by personal goodwill and exchange of gifts (shawl for Sharif’s mother, mangoes for Modi’s mother). Their subsequent meetings and telephonic exchanges indicated that the strained body language and visible discomfiture during the SAARC summit was a one-off event.

Three, the outcome of his Lahore stopover maybe modest yet it is progressive. More importantly it is hedged against any political blowback in case the process of normalisation hits yet another roadblock.

For a local (state) satrap who lacked experience at the federal level Modi has stumped political observers in India and abroad in the manner in which he has taken to to the foreign affairs of the country, giving deft and innovative touches to conduct of diplomacy and using foreign policy to its fullest potential to serve national interest. Since captivating foreign policy analysts with invite to  leaders from India’s neighborhood for his swearing-in, Modi’s diplomacy has  had several achievements to its cap over the last year and a half. The Christmas day pit-stop at Lahore could be Modi diplomatic spontaneity at its best.

Notwithstanding the above India-Pakistan relations travel a potholed obstacle ridden road, which could make even an optimist to not bet against the next bad patch. It remains to be seen for how long Modi and Sharif will get a smooth ride.