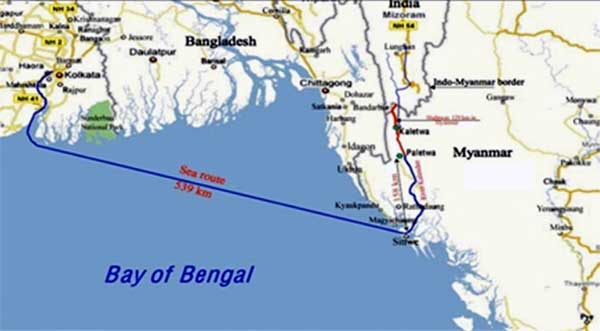 There is a strange dichotomy between what India preaches and what she does on bilateral relations with Myanmar. There is a general acceptance in the corridors of power in Delhi that Myanmar is extremely important for the successful implementation of India’s ‘Act East’ policy, but Naypidaw hardly receives the diplomatic attention which India showers on neighbours like Bangladesh, Nepal and Sri Lanka and, of course China. Tardy implementation of various ongoing infrastructure projects speaks volume for India’s lackluster approach.

The most glaring example is the Kaladan multi-modal transport project. Mooted in 2003, an agreement between the governments of India and Myanmar was signed in 2008 to connect the Sittwe port in the latter’s Rakhine state with the Indian state of Mizoram through a network of waterways and road connections. The ultimate target was linking Myanmar’s maritime infrastructure with Indian ports situated on the country’s eastern coastline. Construction of the project was started in 2010, with 2015 as the targeted deadline for its inauguration.

The completion of this strategically important project is, however, far off. In August, 2014 V.K. Singh, India’s minister of state for external affairs, had said that the Kaladan project would be ready by 2016. In December 2015 Singh admitted delays in completion and pushed back the deadline to 2019. The reality is that, although construction of the Sittwe port has been completed, work on the road connection between Paletwa in Myanmar and Zorinpui in Mizoram, the most vital stretch of the project, has not even begun. A contract for the work has just been given.

Myanmar’s importance to India lies in the fact that the country provides a direct land communication route to the heart of the ASEAN bloc, an economically integrated conglomeration of countries which is now an important pivot of world politics. Unfortunately the India-Myanmar- Thailand trilateral highway project, supposed to connect Moreh in the Indian state of Manipur and Mae Sot in Thailand, is running six years behind schedule. The government of India recently gave an official explanation for the delay. According to Indian mandarins, 69 bridges are being repaired on the Tamu-Kalay section of the proposed highway and building of roads is going on in the Kalewa-Yagi section. In the Chin state also, construction is in progress in the Rhi-Tiddim road.

Improved connectivity with Myanmar bears very high strategic importance for India and New Delhi must see to it that official statements on the issue are not taken as efforts to cover up failures. Improved connectivity in this area means economic regeneration of North Eastern India too, which is likely to put a damper on secessionist activities there.

Indian policy makers must realize that in order to reach out to the ASEAN countries, New Delhi must increase its economic presence in Myanmar. In the area of energy trade with Myanmar, which possesses gas reserves of 90 trillion cubic feet, India has been forced to take a back seat in spite of the fact that several Indian companies like ONGC Videsh Ltd (OVL) and the Gas Authority of India Ltd (GAIL) had a 30 percent stake in exploration and production of natural gas there since the beginning of the last decade. In 2005, Myanmar struck an agreement with China, instead of India, to supply 6.5 trillion cubic feet of natural gas in the next thirty years.

So New Delhi has no other way but to increase its other forms of bilateral trade with Myanmar. Here, also, big tasks lie ahead for New Delhi. While Indo- Myanmar bilateral trade in 2016-2017 was worth USD 2.18 billion, the corresponding figure for Sino-Myanmar trade amounted to USD 5.967 billion. There is however one silver lining in Indo-Myanmar bilateral trade relations. In 2016-2017 Indian exports to Myanmar recorded 3.79 percent annual growth compared to the previous year. But imports from Myanmar to India had an annual growth of 18.43 percent.

Allowing a favourable balance of trade to Naypidaw and speedy completion of infrastructure projects there should constitute the fulcrum of India’s foreign policy in regard to Myanmar. But Myanmar’s exports to India consist of mostly primary agricultural items like beans, pulses and forest products, while India sends finished industrial items. If India really wants to retain its hold on Myanmar then it must extend help towards building industrial infrastructure in that country.