India and Maldives: A make or break visit 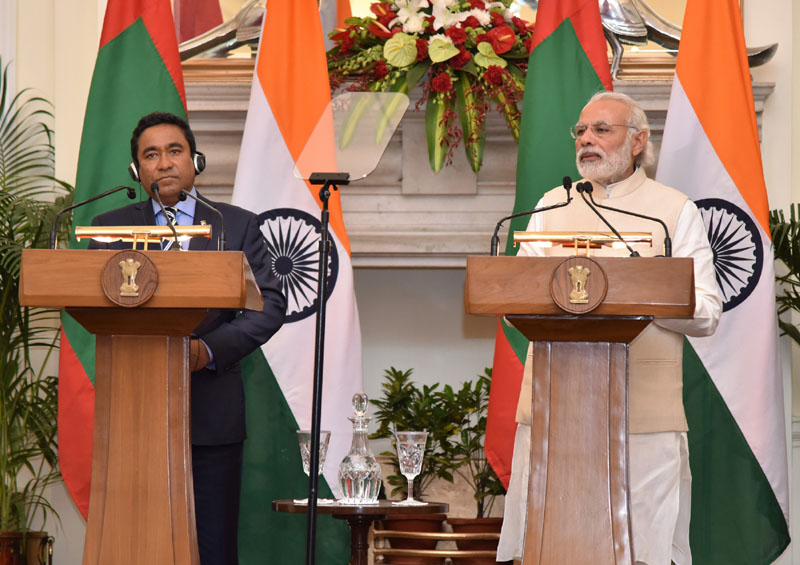 Prime Ministe Narendra Modi delivering his statement to the media at the joint media briefing with the President of the Republic of Maldives Abdulla Yameen Abdul Gayoo, in New Delhi on April 11, 2016.

Following up on unprecedented high-level exchange-visits over the past months, Maldives President Abdulla Yameen is set to visit New Delhi on a two-day official visit, when he would call on his Indian counterpart, Pranab Mukherjee, and hold luncheon discussions with Prime Minister Narendra Modi, both on April, 11. On Friday, when the two governments announced the visit, the Maldivian Correctional Service also rejected the plea of the jailed former President Mohammed Nasheed for an extension of his ‘medical leave’ in the UK, reiterating that the supporting documents were defective and incomplete.

Yameen’s India visit comes at the end of a couple of weeks of global silence on the Nasheed front for most parts. This is the third India visit for Yameen since becoming President in a judicially controversial and politically-contested election in November 2013. On New Year Day 2014, he visited New Delhi on his maiden state visit after assuming office. Later in the year, he attended PM Modi’s Inauguration in May-end, when ‘new India’ quickly re-visited neighbourhood policy and invited all SAARC heads of government to the public function on the occasion.

Despite the bonhomie displayed in public, the Yameen leadership was reportedly upset over PM Modi’s ‘frank talk’ on bilateral relations as they stood vis-a-vis China in particular. Subsequently, the overnight revival of Judge Abdulla abduction case and the consequent arrest of Nasheed in its wake led to Modi cancelling the Maldives leg of the first-ever four-nation Indian Ocean neighbourhood visit by an Indian prime minister, in March 2016.

India was obviously upset over the increasing Chinese influence over Maldives ever since Yameen assumed office. Yameen’s two China visits within three months were interspersed by the first-ever presidential visit by Xi Jinping, and Maldives signing the revived ‘Maritime Silk Route’ (MSR), and inviting high-volume Chinese investments in development projects, all of which made India uncomfortable. The Indian concerns are real, given any possible ‘hidden element(s)’ in China-Maldives investment agreements of every which kind.

From it side, India may have also committed a diplomatic faux pas by issuing one of the rarest statements on the domestic affairs of an immediate neighbour. India may have over-reacted by condemning the police dragging Nasheed to the court premises the day after his arrest. Obviously, the Yameen leadership and the Maldivian establishment were upset over India’s unsuspected ‘intervention in the internal affairs’ of the Indian Ocean neighbour.

The Maldivian establishment’s suspicions may have been backed only by perceptions, not necessarily by facts. It was a known fact that Indian intervention alone might have helped Nasheed stave off the immediate trial in the Judge Abdulla abduction case, a possible conviction and jail-term, during the long run-up to the 2013 presidential polls.

This was despite the fact that the then Manmohan Singh government in India was even more upset by Nasheed’s unilateral, highly imaginative and even more dramatic sit-in inside the Indian High Commission, in Male, if only to defy trial court summons in the abduction case. If in context, the Yameen leadership felt threatened by the Maldivian Democratic Party (MDP) coming up with a unilateral call for the President to hand over power to an extra-constitutional personality in December 2014, it did not try to take the world in general and Indian neighbour in particular, over the short, medium and long-term implications, of the loaded initiative on Nasheed’s behalf.

To the extent, officially India was closer to events on the ground in Maldives since President Nasheed’s assumption of office in November 2008 than all western friends of his and the MDP which he has been leading for long.  It is thus that India may have taken a more ‘moralistic’ view of events and legalities involved in the Nasheed arrest, conviction, imprisonment and his pending appeal before the nation’s Supreme Court. The west seems to be taking a more political view of things, putting aspects of democracy that favoured Nasheed and looking the other side when he was found to be in possible violation.

Yet, bilateral scores may have been even. There is no specific reason why the Yameen government should have reopened and fast-tracked the Judge Abdulla abduction case, when it was already discussing dates for PM Modi’s Maldives visit with India. As it turned out, the trial court handed down a 13-year jail-term on Nasheed the very hour Modi was landing in the neighbouring Sri Lankan capital of Colombo, from where he should have possibly proceeded to Male in the normal course.

Issues pertaining to the prosecution changing an ordinary criminal case into a terrorism-charge, mid-stream and after two years, did raise eyebrows even in the Indian capital as elsewhere. Yet, it was an ‘internal legal and judicial matter’. Better counsel seems to have prevailed since, and Nasheed has since joined the internationally-pressured state’s appeal on procedural issues, which is now pending the Supreme Court verdict.

The question if India could have served the larger Maldivian cause better by Modi undertaking the visit as scheduled in March 2014, and thus used his good offices to help sort out the nation’s domestic issues, would remain debatable for long.  But then, India at the time should have also served notice to its western friends, to let India handle matters in the ‘traditional sphere of Indian influence’, without over-interference and over-indulgence, both before and after the Copenhagen environmental summit.

Today, India has a better grip of things Maldives. While India seems desirous and even more serious about the return of normalcy and stability in the ecologically shaky Indian Ocean archipelago, it can be expected to urge Yameen to keep to the narrow and straight path, both in domestic politics and geo-strategic diplomatic relations. Already in the case of some other South Asian neighbours, India has displayed a silent sense of realism – and geo-strategic priority – that is China’s development investments, as long as it did not hurt India’s security interests and concerns.

India and Maldives have agreed to work closely on IS-brand of international terrorism, which has also attracted more Maldivians per capita than possibly any other South Asian neighbour. On China, there seems to be some common understanding. Yameen, like Nasheed and Gayoom before him, has lost no opportunity to reiterate Maldives’ commitment not to let non-regional players meddle in Indian Ocean waters, other than for trade, transit and development.

To the extent, the new ‘GMR-influence’ foreign policy that he launched only a fortnight after returning from his maiden overseas visit in January 2014, sought to make Maldives ‘independent’; the greater now seems to be the realisation and possibilities to the contrary. Mutual realities seem to be striking at each other, domestic politics and regional priorities notwithstanding.

The Yameen visit, in a way, takes the focus of Maldivian domestic politics away from national capital Male, to the neighbourhood. It would also mean that India is seeking to get a fresh grip on affairs in the ‘traditional (neighbourhood) sphere of Indian influence’, possibly for the first time after the Narendra Modi government came to power.  After taking meaningful, unilateral initiatives on Sri Lanka at the UNHRC, India was seen as yielding to the US-led west, and yet ignored by the latter once their immediate purpose was served out in the March 2012 session.

Of immediate mutual concern should be the upcoming CMAG meeting, when the previous recommendations to Maldives on democracy would come up for review and decision. The one-month deadline for the purpose has already passed, but Yameen is on record thanking India (and Pakistan) for defending his government’s case (against possible sanctions).

At the Delhi talks now, India could be expected to take up with Maldives at the highest-levels, the next course of action India feels desirous, meaningful and purposeful in resolving the Maldivian domestic crisis and the consequent on-again-off-again international pressure on a ‘smaller neighbour’. It would thus be a test on India’s prowess to carry all sides in Maldives, and outside, too, with it, and thus demonstrate its leadership qualities, in convincing and unmistaken terms, without hurting any stake-holder.

The alternative would be for India to be seen as running with the hare and hunting with the hound – satisfying none, and itself, either. Already, India seems to feel tentative about the new leadership in Sri Lanka one more time, over the China-related issues, barring of course the possibilities of another ‘submarine visit’ under the predecessor Rajapaksa regime. Despite being hailed the world over and by every Nepalese in particular for rushing massive and timely quake-relief in the Himalayan neighbourhood, bilateral relations has hit a new low, only after the Rajiv Gandhi rule (1984-87).

It is thus time for stock-taking, not only for Maldives but for India, even more, but then India cannot be seen as yielding to neighbourhood nations using the ‘China card’, and still getting nowhere. It would thus, be a balanced Indian approach that could direct the Modi-Yameen talks, where a certain degree of mutual trust has been built over the past months, on China, IS terrorism, and economic cooperation. The rest of it now hinges as much on the ‘Nasheed factor’ as any other, and neither side could be seen as ignoring or side-stepping it wholly, either.

Unmindful of their possible impact on the Yameen visit, his government has acted upon earlier hidden threats to cancel Nasheed’s medical leave, particularly after the latter used the time to campaign against the leadership, meeting with world leaders and newsmen while in the UK. A day earlier, Yameen’s PPM-controlled Parliament also amended the law to withdraw post-retirement benefits to former Presidents convicted in criminal cases – a threat that the government was holding, and holding out for long, linking it possibly to ‘good political behaviour’ on Nasheed’s part.

The Yameen visit thus becomes a real test for India’s neighbourhood diplomacy, this time under PM Modi. It would be watched as much for what is in store afterward as much as during the visit. In a way, it is a make-or-break visit, not only for bilateral relations, but also for India’s neighbourhood challenges and opportunities, diplomatic prowess and global acknowledgement, more than anything in recent times.

is the Director of the Chennai Chapter of the Observer Research Foundation. He can be reached at: sathiyam54@gmail.com