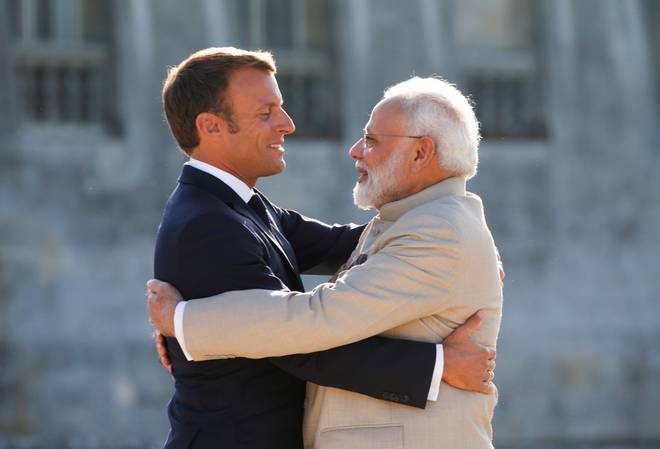 India undoubtedly needs all its energies, resources and friends to fight on these two separate fronts.

L’Affaire Rafale had been in news in the national press for months thanks to the then leader of Opposition, who alleged hanky-panky in the intergovernmental deal signed between India and France for acquiring 36 off-the-shelf Rafale multi-role fighter planes.

Of course, l’Affaire was just an electoral plank, with no connection with the reality of the deal itself. As a result, since May, nothing further was heard about the French jet; now the flagship of Dassault Aviation, Safran and Thales is back in the media; this time for the good reason.

Defence Minister Rajnath Singh and the Chief of the Air Staff, BS Dhanoa will receive the first plane on September 20 at Dassault’s factory in France. The first four planes will however arrive in India only in May 2020. The other jets will then follow in quick succession.

The Indian Air Force (IAF) has already started training 24 pilots in three different batches to fly the Indian custom-made combat aircrafts, which will be deployed (one squadron each) at Ambala airbase in Haryana and Hashimara in Bengal.

The news was released as Prime Minister Narendra Modi left for a State visit to France (and to attend the G7 meet in Biarritz in South France, where he was Macron’s special invitee).

It came at a time when India faced a difficult time on the international scene, with two of her neighbours, clubbing their forces to internationalize the Kashmir issue. China distastefully decided to support Pakistan ojcetions to the abrogation of Article 370 of the Indian Constitution, which has surprised many.

India undoubtedly needs all her energies, resources and friends to face these two separate fronts.

Let us not forget that during a recent press conference at the United Nations, Zhang Jun, China’s Permanent Representative to the UN, said, without any legal basis, that India had changed the status quo in Kashmir, causing tensions in the region; Zhang argued that India had challenged China’s sovereignty interests: “such [action] by India is not valid in relation to China, and will not change China’s exercise of sovereignty and effective administrative jurisdiction over the relevant territory.” He obviously meant that Beijing claims some sovereign rights over Ladakh.

In these circumstances, India needs all her trusted partners and France has traditionally been one of them.

France was the first country to torpedo the Chinese initiative to get a statement on the abrogation of Article 370 from the Security Council; further on August 21, Jean-Yves Le Drian, the French Minister for Europe and Foreign Affairs phoned his Pakistan counterpart Shah Mahmood Qureshi and told him that for France, Kashmir was a bilateral issue between India and Pakistan. Le Drian pleaded for restraint, de-escalation and easing the situation: “It is essential to abstain from any measure likely to aggravate tensions.”

The message was clear.

In a statement before his departure for France, the Indian Prime Minister had observed: “My visit to France reflects the strong strategic partnership, which our two countries deeply value, and share.”

France has a long relation with India particularly in the domain of defence.

In the early 1950s’ India had purchased 71 Ouragans (known in India as Toofanis) from the same Dassault company; HS Malik, India’s Ambassador to France wrote to Prime Minister Jawaharlal Nehru in October 1953: “All of us in the Embassy who have been working on the implantation of the contract with the Defence Ministry here for the supply of Ouragan aircraft were greatly relieved and delighted when we got the news that our four pilots with the four Ouragans had reached Palam safely.” He continued: “I venture to bring to your notice the wonderful cooperation that we have received both from the French officers of the Ministry of Defence, from the Cabinet Minister downwards, and from the French industry.”

Ultimately, India has very few reliable stable friends. After the meeting Modi-Macron, the joint statement noted that the “traditional relationship is enduring, trustworthy, like-minded, and all-encompassing. India- France relations are marked by mutual trust between two strategic partners who have always stood by each other.”

These characteristics do not apply to the all countries; after China tried to bring the Kashmir issue to the UN, US President tweeted: “Spoke to my two good friends, Prime Minister Modi of India, and Prime Minister Khan of Pakistan, regarding Trade, Strategic Partnerships and, most importantly, for India and Pakistan to work towards reducing tensions in Kashmir. A tough situation, but good conversations!” The US President still wanted to ‘mediate’ (he finally dropped his project after meeting Modi in Biarritz).

Symptomatic of the close relations, India and France finalized a closer cooperation in digital and cyber security domain: “the two leaders have adopted a cybersecurity and digital technology road map aimed at expanding Indo-French bilateral cooperation, particularly in the strategic sectors of high performance computing and Artificial Intelligence, with the target of bringing our start-up ecosystems closer to each other,” said the joint statement.

Both nations have been left far behind China and it is high time that India collaborates with friendly countries in this domain, which will determine the superpowers of tomorrow.

Modi’s visit further strengthened the strategic ties in crucial sectors such as defence, nuclear energy and maritime security, and deepen the bilateral cooperation to check flow of funds for terror activities. The collaboration with France in the Indian Ocean is particularly important.

Several articles of the joint statement were consecrated to terrorism and groups operating in Pakistan, such as Jaish-e-Mohammed, Hizbul Mujahideen or Lashkar-e-Tayabba were named.

Apart from defence and new fields in IT, the talks touched upon key areas such as nuclear energy, space International Solar Alliance, and joint development projects.

France, like India needs a reliable partners; Paris has also been at the receiving end of the US President’s tweets. Upset by the fact that France had decided to tax the multinationals operating from its territory, Trump shot off one of his famous messages: “France just put a digital tax on our great American technology companies. We will announce a substantial reciprocal action on Macron’s foolishness shortly. I’ve always said American wine is better than French wine!” Though Trump seemed in a conciliatory mood at the G7 Meet in Biarritz, the moody president can hardly been categorized as a dependable partner.

The follow-up of the Modi-Macron discussions by Ajit Doval, the National Security Advisor and Emmanuel Bonne, his French counterpart was crucial. The two officials have picked up the issues from where they had been left by their leaders, to give the strategic partnership a concrete shape.

According to The Financial Times, they focused on future military acquisition and manufacturing of defence equipment under the ‘Make in India’ transfer of technology. Paris has apparently offered two more squadrons (36) of Rafale aircrafts for the IAF as well as more `Scorpene’ submarine under Project 75 for the Indian Navy. This could give a boost to India’s defence preparedness and send a message across the border(s).

In a world in turmoil, France has been and indeed is an enduring partner for India.

This article India and France: Enduring, reliable partners appeared in The Asian Age and The Deccan Chronicle.