Hezbollah is a Part of the Problem for Lebanon 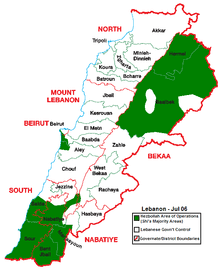 Lebanon is grappling with a severe crisis since the end of its civil war in 1990. The country’s economy and governance have literally come to a standstill. As politicians fail to form a government, causing a wide national frustration and leading the country to sink deeper into economic crisis. Shockingly Lebanon has been without a government since August last year’s chemical explosion that destroyed the port of Beirut. The Lebanese pound has lost over 90 percent of its value. Unemployment is at all time high and prices of essential commodities are skyrocketing. But under this dire situation most prominent political party Hezbollah is surely benefiting. This party leads the biggest power bloc in the Lebanon Parliament and has the most formidable militia. With the weak central government in Beirut, together with the dysfunction of the governance and economic systems. Will eventually transform Lebanon from a state to a territory controlled by Hezbollah. Lebanese people are realizing that Hezbollah is part of the greater problem. As the party create problems within the country and import them from outside too. Let’s look at the factors which have made Hezbollah which claim itself to be a defender of Lebanon as a burden for the country.

Diplomatic Isolation– This Iranian proxy group has been militarily involved in Syria, Iraq, and Yemen, further isolating Lebanon as a large number of Arab supporters turned their back on Beirut. Gulf countries that once were eager to finance Lebanon’s reconstruction and invest in its economy. Now have closed their coffers only because they believe that in all practical terms Hezbollah is in charge of the country.

Opposing Economic Package– Hezbollah and its allies, are opposing reforms required by the International Monetary Fund (IMF) to unlock a potential multi-billion-dollar bailout package. Hezbollah opposes IMF bailout because it would grant the IMF control over certain aspects of the state, including the party’s patronage network. But Hezbollah is not understanding that only the IMF could provide the level of funding needed to re-float the Lebanese economy, and contribute sufficient cash flows for imports of fuel, food, and medicines. Also, Lebanon’s banking sector which is already in tatters is the indirect victim of the war on Hezbollah, which is under heavy US sanctions.

Highjacked Foreign Policy– Hezbollah’s has indirectly controlled the foreign policy of Lebanon through its allied figures from the Free Patriotic Movement (FPM). Headed first by President Michel Aoun and more recently by GebranBassil since 2015. During his tenure as a foreign minister from 2014 to 2020. Bassil repeatedly took regional stances detrimental to Lebanon’s interests despite the adoption by the government of a regional self-distancing policy. In 2018, Lebanon’s foreign minister failed to attend an extraordinary Arab League meeting to discuss violations committed by Iran. Beirut’s even failed to condemn attacks on Saudi diplomatic missions in Tehran which led to the suspension in 2016 of a $3 billion aid package for the Lebanese army. As a result, of this highjacked foreign policy Beirut’s standing has been severely hurt at the regional level. When former Prime Minister Saad Hariri attempted to get financial support for the country from Arab leaders during 2019, he came back empty-handed.

Undermining the State– Hezbollah undermines the authority of the Lebanese state now and then through the use of force which it exercises because of its arsenal. For example, in May 2008, Hezbollah fighters occupied West Beirut and Mount Lebanon. In protest of then Prime Minister Fouad Siniora’s decisions to dismantle Hezbollah’s telecommunications network Al-Manar which is not subjected to any state regulations. Hezbollah controls sites that are off-limits to Lebanese security forces and the army. Its members are immune from judiciary and security agencies. Hezbollah enjoys total freedom in bringing in goods and people through Lebanese ports, border crossings, and Beirut airport. No taxes paid, no questions asked and no security check is done. Hezbollah has demonstrated that it is capable of preventing elections from taking place in Lebanon and imposing its own candidate. Also, it can shut down the government as it desires. The group decades of undermining the state and acting as a law unto itself have made a mockery of public institutions and state sovereignty.

Creator of Political Instability– Hezbollah has on multiple occasions pushed Lebanon into a political crisis. Hezbollah is suspected of assassinating former Prime Minister Rafik Hariri in 2005. In 2011, the group’s politicians quit the governing coalition, causing it to collapse. In November 2017, anti-Hezbollah and anti-Syrian Prime Minister Saad Hariri resigned and fled to Saudi Arabia, alleging that Hezbollah had attempted to assassinate him. Hariri returned to Lebanon later that month and rescinded his resignation. Hezbollah knows very well that in a stable political environment it can’t operate with a free hand.

For quite a while now no unified opposition force has been able to halt Hezbollah’s quest for unchallenged power. It’s just a matter of time that the Lebanese state will fall into Hezbollah’s hands like a ripe fruit, and the country will be made a satellite state of the Islamic Republic of Iran. Hezbollah is holding the country hostage at the expense of the Lebanese people. Moreover, one cannot have a rule of law or sovereignty if one group dictates its wishes and all its actions are beyond accountability. But sooner than later Hezbollah will witness mass unrest against it as people are realizing that who is the primary source of their misery.