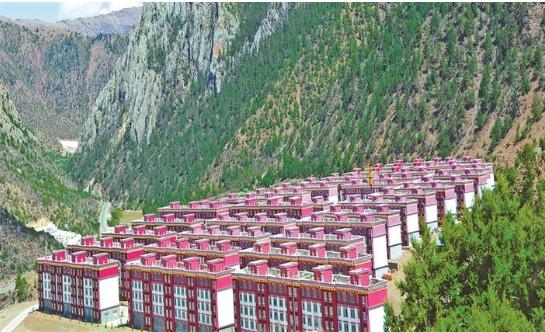 In the recent months, China has started in a massive relocation scheme in Tibet, redrawing the demography of India’s borders.

Beijing admits that though the rural poverty rate was more than 97.5 percent in 1978, it took 22 more years for Beijing to launch a serious program for aid development in the poorest areas of Western China. In 2012, 98 million Chinese people still lived below the poverty line; a year later, 128,000 villages remained classified as impoverished.

According to the China Daily, for Tibet it is a historic moment, “Chinese people felt excited and proud by the news that the local government in the Tibet Autonomous Region [TAR] had decided to strip 19 counties of their poverty labels, after 55 Tibetan counties cast off such labels in 2018.”

China’s aim was to eliminate the ‘Two Worries’, the lack of food and sufficient clothing.

While more than 100,000 villages are said to have been stripped of their ‘poverty label’ in China, the main ‘battle’ seems to have taken place in Tibet and Xinjiang, the two restive provinces which had been ‘liberated’ by the Communists in 1950.

This obviously raises the question, why have these areas, ‘liberated’ nearly 70 years ago, remained so poor? Beijing has a lot to answer for, what was the Party doing all these years?

In Tibet unfortunately, poverty alleviation is achieved by large population relocations, often near the Indian borders.

On December 24, China Daily cited Liu Yongfu, director of the State Council Leading Group Office of Poverty Alleviation and Development in Beijing, who stated that the TAR and in the four provinces where ethnic Tibetan people live (particularly in three prefectures in Gansu, Sichuan and Yunnan) as well as the southern part of the Xinjiang Uygur Autonomous Region had been clubbed together: “Officials commonly refer to these regions as the Three Areas and Three Prefectures, the deeply impoverished areas.”

According to en.tibetol.cn, all the TAR 74 counties and county-level districts have been lifted out of poverty in 2019, “which means the whole region has got rid of absolute impoverishment”.

The article takes the example of a Tibetan family, who in 2018 moved to a new house from Rongma Township in Nyima County of Nagchu Prefecture, (located north of Lhasa at an altitude of more than 5,000 meters), they have been relocated near the Tibetan capital. The website claims that it was the first high-altitude exemplary site of ecological relocation in Tibet: “From June 10 to 18 in 2018, 571 herdsmen moved in two batches to Lhasa which is over 1,000 miles away.”

It is just an example.

More worrying for India are the relocations through the Xiaogang (‘moderately well-off’) villages located on India’s borders.

More than hundred villages have been built, whether in Yume (north of Upper Subansiri), Tsona county (north of Tawang), Rima area (north of Kibithu in the Lohit Valley) or Chiakang (not far from Demchok in Ladakh) as well as in some more populated areas like Yatung in Chumbi Valley, near Sikkim or Purang, close to the trijunction between Tibet, Nepal and India.

On September 30, Xinhua mentioned the number of Tibetans relocated to new homes in anti-poverty fight: “Nearly 250,000 people in Tibet have moved into 910 new settlements as part of poverty alleviation efforts by August 2019.”

The official News Agency noted that China had planned to invest 19.78 billion yuan (US$ 2.8 billion) in its relocation program to build 60,931 houses in around 970 settlements for 266,000 poverty-stricken citizens in the TAR.

According to Beijing, relocation is used as a means of poverty reduction: “By offering job opportunities in industrial parks and cities, the relocated residents are ensured ways to make a better living.” As the relocations often happen in brand new villages, one can ask, where are the ‘industrial parks’ in these places?

Another propaganda article in China Tibet News speaks of the happy life brought by the relocation. The story says: “Starting eastward from Shannan (Lhoka) prefecture after a three-hour driving, one can arrive at Gongkang Village in Lingda Town of Gyatsa County, with an average elevation of 3,269 metres.” Interestingly, the village is not far from the site of a new dam on the Yarlung Tsangpo (Brahmaputra in India). The new settlers are probably engaged in dam construction; in another word, they are migrant workers.

In August 2016, this place had already been designated as the target for poverty alleviation: “At present, there are 369 households and 1,269 people in Gongkang Village. The project of advancing relocation covers an area of 472,000 m², and its total investment reaches 210 million yuan (US$ 34 million),” said Xinhua.

All the villagers are said to benefit from a medical insurance, while the children enjoy favorable policies “at the stages of compulsory education and senior high school” and college students receive regional subsidies. Subsequently, the enrollment rate of the village’s school-age children is 100%.

A Gongkang Village Industrial Development Co has been established, with five ‘mutual-aid teams’, namely ecological breeding team, agricultural and animal products processing team, labor-force exporting team and agricultural machinery promoting team. This sounds like the setting up of communes during the Great Leap Forward in China.

A list of benefits is given and the article concludes: “Nowadays, a harmonious and socialist new countryside has been built beside the Yarlung Tsangpo River under the Party’s policy of benefiting people and Gongkang villagers.”

One important factor admitted by the Chinese authorities for relocating the Tibetans is tourism. Huang Yongqing, head of the regional tourism development department told Xinhua: “The regional government has encouraged rural residents and herdsmen to open family inns. The average annual income of the total of 570 family inns surpassed 100,000 yuan (US$ 16,000), and some even reached 300,000 yuan (US$ 48,000).”

It was observed that the number of tourists to visit Tibet reached 33.7 million, up 31.5 percent year on year; the income from tourism increased by 29.2 percent to 49 billion yuan (US$ 8 billion). Of course, these figures always need to be taken with a pinch of salt, but still there is no doubt that Tibet receives millions of Han visitors and their number is increasing.

More worrying, Xinhua announced in December that an application lab for Tibetan speech technology research had been established at the Tibet University in Lhasa: “The lab aims to create a platform of integrative development and application for ethnic language, phonology, and modern information technology, and to bring convenience in communication for local people in life and at work.”

iFlytek, an artificial intelligence heavyweight, had been working with the Tibet University for more than eight years on Tibetan speech technology.

It means that the relocated villagers, whatever their dialect, can now be monitored with the latest technology.

With one stone, China kills several birds: it provides employment to the poorer section, it monitors the restive populations better, particularly the nomads and it develops the border areas.

The ‘relocation’ will probably continue on a war-footing in 2020, bringing millions of new migrants to India’s border …and Happiness to the Party.

For India, the change of demography on her borders is a serious issue.

The new settlers are not Tibetans alone, Hans too are brought to the borders to take the lead in the implementation of the Party social and strategic policies.