From Drug Trafficking to Cultivation: A Global “Unchallenged” Nexus 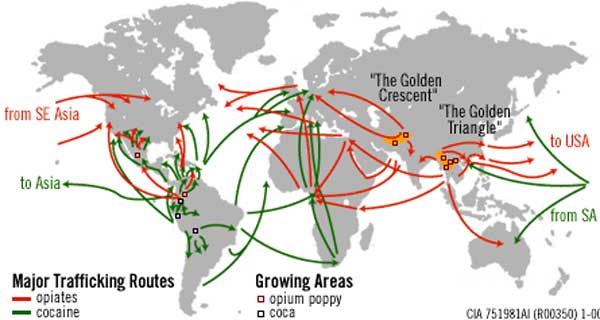 In the light of growing “intense” nexus between transnational organized crime factions, sex traffickers, gun runners and money launderers, today, drug trafficking has become one of the most “complex yet diverse” issue in the world with an ability to seriously cripple socio-politico-economic architecture of a country while seriously damaging its legislative institutions.

Moreover, large shipments along with laundered money especially “hard cash” are massively involved in drug trafficking holding significant “importance” on an evidential approach for law enforcement agencies, as their interaction majorly takes place with transnational organized crime factions, which heavily participates in trafficking of all kinds (from women to weaponry to children), corruption and more recently, terrorism. In an effort to effectively combat a systematic “business” modus operandi, inter-agency interaction of the law enforcement agencies are outmost importance. It is important for policy makers to create policies effective and efficient enough to counter a “systematic” organized crime.

Furthermore, policy makers must understand the importance of active inter-agency and intra-agency interaction with other law enforcement agencies, but within the boundations of law and human rights while strengthening border management and respecting jurisdictional limitations.

To cultivate drug, organized crime factions, traffickers, drug cultivators use cannabis extensively. For traffickers in South East Asia, Cannabis is quite popular, cheap, readily available, which makes it their principle crop. Between the years 2009-14, law enforcement and intelligence agencies estimated Cannabis plantations in over 149 countries. This figure surpasses the global opium poppy cultivation, which is cultivated in 49 countries, whereas probable nations with coca bush cultivation remains 7 in world today. Although, the information gathered by intelligence agencies on cannabis and its probable cultivation remains “unreliable” as compared to information gathered by agencies on coca bush and opium poppy.

Since 2009, law enforcement agencies report an escalation of opium poppy cultivation to over 51%, according to the agencies the principle reason behind such “escalation” is Afghanistan’s “unchecked and unaccounted” opium drug cultivation and trade. On the contrary, the coca bush cultivation drastically fell to 31% in 1998 which then fell to 19% in 2009. Inspite of vigil law enforcement agencies and strict legislations against drug traffickers and factions involved in production and distribution of opium poppy and coca bush, the total production of opium and cocoa is continuing to rise significantly.

With massive “technological advancements” and efficient“ cocaine-processing” laboratories in distinct jungles of Latin America and the Caribbean, cocaine production has significantly risen to the level it had achieved in the early 1998, despite all efforts taken by global communities including the efforts of United Nations Office of Drugs and Crime (UNODC).

Today, Afghanistan alone cultivates over two-thirds of illicit opium of the world, slowly limiting its cultivation to over 281,000 hectares in the light of active vigilance from International Security Assistance Forces (ISAF) and its NATO allies. Opium production in the international markets fell to over 38% in 2015, losing roughly 4,770 tons every day. The users of opium (principally the users of opium, morphine and heroin), has received fewer number of users but continues to affect the lives of over 17 million people and counting.

Intelligence agencies and law enforcement “rigorous” busts points towards a sudden demand in opium especially in reasons where it showed signs of decline, especially the ones in North America. However, inspite of the sudden “resurrection” in drug usage, opium usage in EU countries show sudden “unusual” increment particularly in the opium drug cultivation and distribution. Policy makers must note that, opium drug addicts have phenomenally increased in African countries. Law enforcement agencies deny any sudden “surge” in opium distribution between the period 1998-2014, although Opium distribution has significantly decreased in the Pacific. Although, the usual “Balkan Route”, which is the principle route for organized crime factions to traffic Afghan opiates throughout the Western and Central Europe continues to be the principle channel for trafficking heroin.

Particularly in drug trafficking, the discussion would be incomplete without addressing the “Golden Triangle”. It comprises mostly of North and North-Eastern part of Myanmar, in and around the border of Laos, Thailand and Southern part of China. The drug traffickers also utilise the “natural benefactors” such as steep terrain, mountains, dense forests along with heavy rains which also keeps them from the “emanating “eyes of law enforcement agencies. Inadequate and ineffective law enforcement policies coupled with poor and incomplete legislations limit the access of “aggressive” governments forcing them to leave illicit drug cultivation unpersuadable and tolerable with time.

Besides the “region specific” drugs such as opium and cocoa, cannabis is literally a drug produced by every other country in the world. At the international market, it is one of the most common drug used, with users as higher as 183 million as of 2015. A drug cultivated by users often in the garage or backyards, in small proportionate, frequently “bartered” or sold through informal trading. Trafficking of Cannabis creates marginal profits, especially due to low quantity and properties that makes it easily detectable. Hence, producers intend to limit their markets to “local” region, preferably with “known individuals”. Most of the production and consumption is domestic, and if organised crime factions traffic Cannabis, it is “strategically” done using region specific factions/players.

North America and Africa are the largest markets of Cannabis herbs, with suppliers comprising principally domestic, or from popular regions of South and Central America. Moreover, factions supplying Cannabis prefer to use the markets of Europe, Middle East and North Africa.

The rampant operations of drug trafficking units, commonly described by law enforcement agencies as “cartels” are defined by the United States Drug Enforcement Agency (DEA), a leading federal agency of the US, as “complex organizations with highly defined command-and-control structures that produce, transport, and/or distribute large quantities of one or more illicit drugs”. Over decades, law enforcement agencies have witnessed significant rise of drug trafficking organizations not only in number but also in its evolution to form a systematic “organized” crime factions, involving crime families particularly where secrecy holds principle importance, to street gang bangers with thousands of followers, in nature a cult.

During a “closed door” meeting of leading law enforcement agencies of US and Europe, important decisions regarding the enforcement and apprehending mechanism of drug traffickers were discussed. During the meeting a “systematic” definition of drug syndicates was created and categorised according to their operations. In accordance to the discussion,

•  “communal businesses” comprised of members of a community which were bound by race, ethnicity, religion, nationality, neighbourhood, or a common cause; and

•  “corporations” which were large “hierarchical” organizations with a formidable leadership or a specific appointment of members in the board along with a ladder to maintain provide specific orders to the “pawns” of the group. It also contained “vacancies” for ambitious individuals and promoted the most loyalists in the group to middle management or upper level.

Crime factions in such “large” capacities were mostly para-military in nature. Using military tactics, they exploited “vulnerable” border regions of specific nations, while taking responsibility to protect the delivery of shipments, either shipped or flown, or smuggled through roads internationally or domestically. On many scenarios, drug trafficking organizations had deep nexus with militant factions and para-military organizations; not limiting their interaction with terror factions.

Drug trafficking factions would then use such militant factions/partnered actors to exploit new markets, guarantee more active suppliers, dealers, launder illicit money and finance other “activities of interests”. Such agencies then appoint forensic accountants commonly called as “cleaners” who then launder the “illicit” money for the factions. Then money is used to finance “non-legitimate” activities and high-income business deals. They then use large funds in off shore accounts to finance “global actors” initiatives while keeping the movement of finances “fluid” i. e. from one bank to another in an effort to make tracking of accounts difficult, which if intercepted would result in a loss of billions.

Besides benefitting from “joint operations”, drug trafficking factions do not limit themselves to restrain from using “excessive violence” against competitors particularly the ones who challenge the authority of these organizations. Furthermore, they use ruthless means to eliminate individuals such as journalists, top law enforcement agents and border patrol heads of organizations, in an effort to prevent any hindrance in their operations. Throughout the world, drug trafficking factions are majorly reasoned behind political assassinations, organized crime and gun running.

Since 9/11, there has been a phenomenal increase in narco-trafficking, an advanced “hybrid” warfare that initiates excessive violence in an already violent drug trafficking arena. Militant factions such as FARC (Fuerzas Armadas Revolucionarias de Colombia), the Taliban, HAMAS and Hezbollah are active partners in terror activities and principle “benefactors” of drug trade. These narco-traffickers have been responsible for car-bombings, kidnapping, genocides, mass executions, and political assassinations. Throughout its modus operandi, street gang members and gang bangers are “backbone” of their operations, actively distributing drugs to its large scaleconsumerswhile generating large sum of money, while simultaneously instigating a recruitment process for the “delusional” miss-guided youths.

Cultivating drugs and trafficking it through international drug trafficking networks cannot be simply limited within the definition of “crime”, it is an “illicit” business which has “dangerous” outcomes far beyond the “supplier-distributer” relationship. Enormous profits generated through trafficking results in “excessive violence”, which further extends to political killings, corruption a realm which then slowly grows into a “parasite”. They then offer bribe to influence the decisions of individuals and law enforcement officers at regional, local and national level. They, then slowly cripple the justice system and law enforcement institutions by flooding the “once stable system with crooked officers” and instigate a “whirlpool of de-stability”. They not only cripple the governing institution but drastically reduce the effectiveness and efficiency of the government, as the funds generated by trafficking further fuel resentment and discontent which could result in civil war scenarios.

Similarly, drug trafficking factions find “vulnerable” political actors, who could at the time of need, assist them in their acts. These “vulnerable” political actors see this as a moment to fund their campaigns. This then gives opportunities to many non-state actors to actively participate in the drug trade, which seems “lucrative” in the light of aforementioned scenarios. These non-state actors either rebel militant factions or guerrillas, use their partnership to reinforce their fight against the state.