“I earnestly hope that the modernisation of India’s Mirage 2000 fleet will be executed by Dassault, Thales and MBDA.”

Mr. Hervé Morin was born on 17 August 1961 in Pont-Audemer, Eure (Normandy). He was reelected thrice since 1998 as an MP representing the constituency of Eure. He is leader of the New Center Party. After the presidential elections of 2007, his Party became an ally of the majority (UMP Party). He was later selected by President Nicolas Sarkozy to hold the important defense portfolio.

In an exclusive interview to the Indian Defence Review, the Defence minister answers questions by Claude Arpi on Indo-French relations, in backdrop of the forthcoming visit of the French President to India in December 2010 during which several agreements are likely to be finalised.

Hon’ble Minister, could you give a brief overview of Indo-French defence relations?

We have a long-standing military cooperation. When India desired to diversify its military relations in the early 1980s, France responded, and a relationship of trust was built, especially with the supply of Mirage 2000s.

The Rafale is an exceptional aircraft, which meets the needs of the Indian Air Force particularly well.

In 1998, India and France decided to raise their bilateral relation to a strategic level. The establishment of an Indo-French strategic partnership enabled us to strengthen our ties further and mutually support our voices at international bodies. Whether it concerns its candidature for a permanent seat at the Security Council or the amendment of regulations for civil nuclear energy exportation, India knows that it can count on France’s support.

Since the beginning of our strategic partnership, a high-level defence committee has been meeting every year and other agreements have strengthened our bilateral relations. I would particularly refer to the founding of an annual forum on research and technology in 2002, and the signing of the Indo-French defence agreement in 2006. Further, joint military exercises are held every year between our air forces and navies. Our relation in all these areas has attained a high level of trust. 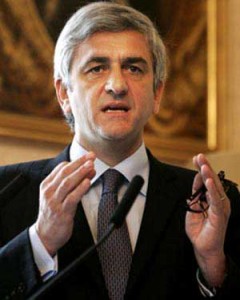 What are you expecting from the Presidential visit in December?

Last year, India was the Chief Guest for our national day parade on the Champs Elysées in Paris. On the occasion of Prime Minister Manmohan Singh’s visit to France, our two countries reiterated their resolve to give a fresh impetus to our strategic partnership. Our defence relations constitute one of its principal pillars. President Nicolas Sarkozy’s upcoming visit in December will make our partnership progress even further in all its facets, be it facing common threats, or intensifying our operational cooperation, or bringing the projects for equipping the Indian armed forces, launched together, to their fruition.

What are the most important projects underway with India?

Our cooperation concerns the very heart of our security: counter-terrorism. This is even more indispensable as we often face similar kinds of threats in Afghanistan, in Europe and in India, as borne out by the attacks in Mumbai in November 2008. Further, we have a very promising operational cooperation, be it regarding anti-piracy operations, joint exercises or officer exchanges.

The Maitri project for joint missile development is mentioned in the political Joint Statement made in September 2008. It commits the French company MBDA, and the DRDO from India in an unprecedented joint project, which will involve extremely ambitious transfers of technology

With regard to defence equipment, the Indo-French relation translates into the supply of strategic equipment (fighter aircraft, submarines), as also state-of-the-art technology for the entire gamut of the Indian armed forces’ requirements. As our own history has made us extremely sensitive to India’s desire to favour local production and develop defence industry, this relation has always been characterised by mutual trust and technological cooperation. As always, we are following the true course of a partnership.

The chief project underway is the manufacture, under licence in India, of six Scorpene submarines at Mazagaon docks, Mumbai. It is a project to which we feel totally committed, in support of our Indian partners. Among other projects that have matured, one can cite the modernisation of the Indian Air Force Mirage 2000 fleet; two joint development projects – the Maitri project for a surface-to-air defence missile system, and the Kaveri fighter aircraft engine; the supply of reconnaissance and observation helicopters or, in the slightly longer term, the second phase of six submarines.

For more than 50 years France has been a trusted supplier of military equipment to India. India recently floated a tender for purchasing 126 medium multirole combat aircraft. What are your hopes for what is being called the “contract of the century” in India?

The Rafale is an exceptional aircraft, which meets the needs of the Indian Air Force particularly well.

I am sure that the field trials, completed in spring 2010, would have enabled the Indian Air Force and the Ministry of Defence to gauge fully the quality of this aircraft, which the French Air Force itself is equipped with. I have also noted that the trials were conducted with great professionalism within the strict deadlines.

As part of this partnership, we are, of course, extremely attentive to the comments or specific requirements that the Indian Air Force or the Ministry of Defence may send us.

Has the contract for refitting the Mirages been signed?

The acquisition of the Mirage 2000 in the early 1980s was a very important step in bringing India and France close. In the same spirit, I earnestly hope that the modernisation of India’s Mirage 2000 fleet will be executed by Dassault, Thales and MBDA. I am confident that the negotiation of this contract will reach speedy conclusion.

What is the status of the Maitri project for joint development of surface-to-air missiles?

The Maitri project for joint missile development is mentioned in the political Joint Statement made in September 2008. It commits the French company MBDA, and the DRDO from India in an unprecedented joint project, which will involve extremely ambitious transfers of technology. The anti-aircraft defence system developed in India, which will use this missile, will meet the requirements of the Indian Air Force and the Navy as well as that of the the Army, should the latter wish to join the programme. I am confident of the completion of this joint project, which perfectly illustrates the spirit of our strategic partnership as it implies the joint development of a new weapons system.