The Independence of India came with the pain of partition and the 1947-48 Indo-Pak war. Soon after independence, Pakistan attacked Kashmir with tribals from the North West Frontier Province (NWFP) backed by the regular Pakistan Army. They were few kilometers away from Srinagar airport when Indian soldiers fought gallantly to drive them back. 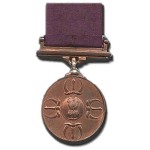 The Government wanted to honour these brave men, but there were no gallantry awards available.

During the Dominion period (1947-50), the British King remained, theoretically, the head of state. Pre-1947 awards could have been awarded, but awarding personnel of opposing forces with the same medals against each other seemed ridiculous to both New Delhi and London.

Finally, based on specific proposals, new awards known as the Param Vir Chakra (PVC), Maha Vir Chakra (MVC) and Vir Chakra (VrC) were finalised in June, 1948. But the Governor General of India could not institute the awards, as India was still a dominion. So a draft of the Royal warrant was sent to London for approval of the Crown in June 1948. But how could the King sanction awards for a war between two members of the Commonwealth? Moreover, he would not have a symbolic presence on the medals, and the draft warrants were never implemented.

During the Dominion period (1947-50), the British King remained, theoretically, the head of state. Pre-1947 awards could have been awarded, but awarding personnel of opposing forces with the same medals against each other seemed ridiculous to both New Delhi and London.

A ceasefire came into force on January 1, 1949. Prime Minister Jawaharlal Nehru urged the Governor General Raja Gopalachari to approve the institution of the awards, but Rajaji thought it was inappropriate as India was still a dominion, and advised Pandit Nehru to wait till January 26, 1950 when India would become a republic.

After crossing these constitutional hurdles, Major General Hira Lal Atal asked Mrs Savitri Khanolkar (popularly known as Savitri Bai) to design these medals. Major General Atal was given the responsibility of designing and naming the gallantry awards of independent India. He chose Mrs Khanolkar for her immense knowledge of Indian mythology, Vedanta and languages like Sanskrit, Hindi and Marathi.

Mrs Khanolkar was born Eva Yvonne Linda Maday-de-Maros in Switzerland on 20 July, 1913, to a Russian mother and a Hungarian father. From her childhood, she was fascinated by both India and its culture. In the winter of 1929, on a skiing holiday at Chamonix she met Vikram Khanolkar, a young cadet of Royal Military Academy, Sandhurst. 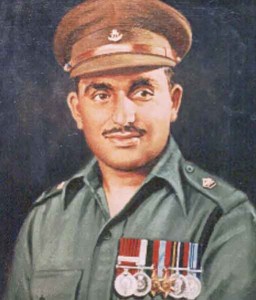 They fell in love. In 1932, Eva came to India, converted to Hinduism and got married to Vikram. Then she learnt fluent Hindi, Marathi, Sanskrit, classical music and Kathakali dance. Hindu philosophy was her passion. She wrote two books – ‘Sanskrit Dictionary of Names’ and ‘Saints of Maharashtra.’

For the design of the medal, she selected the mythological weapon of Indra, the Vajra; it was made by asthis (bones) of Maharishi Dadhichi who happily gave his bones to Indra to make a amogh (unfailing) weapon to kill Vitra. The design has four replicas of the Vajra surrounding the State emblem including the motto embossed in the centre. On the reverse, the words “Param Vir Chakra” are embossed in Hindi and English, separated by a lotus.

Bravery and leadership of highest order was displayed by Major Sharma for which he was awarded the first Param Veer Chakra on 26th January, 1950.

While designing the medal, Savitri Bai did not know that the first PVC would be awarded to her daughter’s brother-in-law, Major Somnath Sharma from the Kumaon Regiment. Major Sharma was a battle-hardened soldier who had fought in Arakan, in the Burma Campaign of World war II and had been Mentioned in Dispatches.

His injured left arm was heavily plastered, and he was advised to stay in Delhi. But when heard that the ‘A’ & ‘D’ Companies of the 4 Kumaon were being moved to the Kashmir valley, he insisted on going along. He argued that no one knew his men better than him, and if they were going into the battlefield, then so was he.

On November 3, 1947, the Kumaon Regiment established a firm base on the high grounds west of the village of Badgam. Though Sharma had noticed what he thought was a group of villagers taking shelter in a nalla (ditch), everything else seemed quiet and calm. Sharma was ordered to start thinning out from the Badgam area from 1330 hrs onwards. At 1400 hrs, ‘A’ company had moved back towards the airfield. Sharma was ordered by Brigadier L P Sen to commence withdrawal at 1500 hrs.

Everything seemed to be normal until the ‘villagers’ in the nalla started moving in different directions around Major Sharma’s company. Soon the entire company of about 90 men was under fire from west of their position. This was backed by light machine gun (LMG) and mortar fire. Major Sharma was hesitant to return the fire for fear of killing innocent civilians.

Using everything they had, they repulsed the first attack. But enemy pressure started to increase and they were soon facing some 500 odd tribesmen. He asked the brigade commander for help, and was promised air support. Being short of men, he laid out ground panel indicators to guide the aircraft onto the target.

D company repulsed attack after attack, but very soon they were outnumbered by ratio of 7 to 1. He was informed by Brigade commander that 1 Punjab was on its way to reinforce his position. But Major Sharma knew that this would take time. With utter disregard for his own safety, he started going from one section to another in full view of the enemy to inspire his men to fight till last bullet so as to delay the enemy advance towards airfield as much as possible.

When he saw that causalities were affecting the LMG fire, he started filling LMG magazines himself. Then a mortar shell landed right in the middle of the ammunition, resulting in an explosion that killed him.

This gallant action of D company in which it lost Major Sharma, Subedar Prem Singh Mehta and 20 other ranks, delayed the enemy advance by six hours. When Badgam was recaptured by our troops, the bodies of about 300 tribesmen were found at D Company’s position.

Bravery and leadership of highest order was displayed by Major Sharma for which he was awarded the first Param Vir Chakra on 26th January, 1950. His last message to headquarters was “The enemy is 50 yards from us. We are heavily outnumbered. We are under devastating fire. I shall not withdraw an inch but will fight to the last man and the last round.”