Threats in the Indian Ocean region

From the Straits of Malacca to the Horn of Africa, piracy is a major threat. The direct damage terrorist-pirates could do is limited, but their crimes would probably impede regional trade, with economic consequences, from lost business and customs revenue to insurance hikes that damaged fragile economies and multinational corporations alike. The worse scenario would be terrorist-sponsored pirates who engaged in sheer destruction with weapons of mass destruction.

Bangladesh, Myanmar and Thailand are known to be sources and conduits for sea-based smuggling rackets and arms-trafficking. The Liberation Tigers of Tamil Eelam (LTTE) is also to use foreign shipping vessels for gun running. It is estimated that about 30% of the total illegal arms trade in the world reaches India.

Major environmental problem in the Indian Ocean is the spilling of oil. Oil pollution in the Arabian Sea is well-documented by oceanographers.

India is uniquely placed between the two major drug and narcotics producing parts of the world, namely, the Golden Crescent, including Afghanistan, and the Golden Triangle, spanning the regions of northern Thailand, East Myanmar, and West Laos. India is sandwiched between these two and is thus both a convenient and vulnerable conduit and destination for drug and human trafficking. The sea routes from Thailand to Bangladesh to India are especially thriving with this dangerous trade. Drug peddling, production and distribution are often seen as the easiest form of financing subversive activities. The presence of liberation organisations is both the cause and effect of smuggling trade. Symptomatic to this trade is the illegal migration and trafficking of humans. A phenomenal number of people are attempting to enter richer countries illegally. This is soon to overshadow drugs as the largest illegal business in the world.13

Another major environmental problem in the Indian Ocean is the spilling of oil. Oil pollution in the Arabian Sea is well-documented by oceanographers. The Japan oceanographic centre has reported that during 1975-80, on 495 out of 611 occasions, oil slicks were sighted in a sample quadrant close to Goa.14 This is highest frequency of oil slicks in the Indian Ocean. It is higher than even the transects surrounding Sri Lanka, which is close to the supertanker lanes.

The security environment in the northern Indian Ocean is being challenged from several directions. The region is plagued with piracy, drug smuggling, gun running and illegal migration. 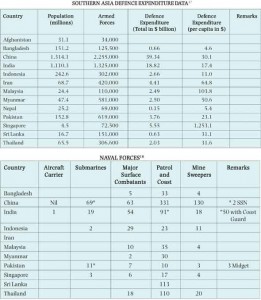 Efforts have been made by states to address these problems and there has been an encouraging response from states but only as part of a bilateral agenda.

China has not been unaware of these developments. It is in the processing of building a ‘string of pearls’ around India. It developed a naval facility, including submarine infrastructure, at Sittwe on Hanggyi Island; electronic posts at Manaung, Hanggyi Zedetkyi and on the Greater Coco island in Myanmar (Burma) in the Bay of Bengal. This island formed part of India until 1954 and lies just 50 kilometres from the Andamans. It is an ideal location to monitor Indian naval and missile launch facilities.

China hopes to establish a naval base in Marao (25 miles from Male) in the Maldives from where the Chinese navy proposes to deploy nuclear submarines fitted with sea launched Dong Feng. China is building a dual purpose naval facility in Gwador in Baluchistan, besides assisting in the construction of new ports at Ormara and Keti Bandar in Pakistan. And it hopes to build a naval base in Bandar Abbas in Iran overlooking the strategic Straits of Hormuz. US$ 200 billion worth of oil passes through the straits each year.

India has expanded its security horizon beyond its territorial defence. India is essentially a maritime nation with a coastline of nearly 7,500 kilometres which falls halfway to the nation’s land frontier of 15,000 kilometres. With the continental shelf, the sea frontiers extend manifold. However, India has so far been able to explore only half of the area i.e. 75,000 kilometres bringing out 9.5 metric tonnes of natural wealth. Ninety per cent of India’s trade is ferried through sea, making it a lifeline of the nation’s economic prosperity. However, despite the lack of sea consciousness India is the sixth largest producer of fish and possesses the seventh largest merchant shipping fleet.

China is in the processing of building a “˜string of pearls around India. It developed a naval facility, including submarine infrastructure, at Sittwe on Hanggyi Island; electronic posts at Manaung, Hanggyi Zedetkyi and on the Greater Coco island in Myanmar (Burma) in the Bay of Bengal.

The world shipping tonnage puts India at the 17th position. The country has 12 major and 175 small ports. There are inadequacies in terms of infrastructural growth, port congestion, lack of networking and communication, poor power and water links and the mafias. Even though India has achieved a high degree of self-reliance in the field of marine science and technology, it has failed to exploit its sea opulence judiciously.

The Maritime Draft Policy aims to develop India’s maritime sector with new projects for developing shipping, ports and waterways. Of special significance is the Rs 10,00,000 Sagarmala project. However, a lot needs to be done in strengthening, infrastructure as it is causing a major loss to the exchequer as Indian port operations are being circumvented by Singapore, Dubai and Colombo.

A greater Indian Ocean strategic alliance could be to the 21st century what the North Atlantic Treaty Organisation was to the 20th : A military alliance that prevents a catastrophic war and fosters regional cooperation. A vision to grasp the command of the Indian Ocean will be decisive to the global future. Both, India and the US have conducted several exercises at sea in the recent past and carried out joint patrolling in the Indian Ocean upto the Malacca Straits to combat piracy and protect the sea lanes of communications.