A region is an area with geographical features which can be analysed separately but are inter-dependent e.g. climate, position, structure, land forms, soils, vegetation and the human society dwelling in it. “The words geo-political, strategic, and geo-strategic are used to convey the following meanings: geo-political reflects the combination of geographic and political factors determining the condition of a state or region, and emphasising the impact of geography on politics; strategic refers to the comprehensive and planned application of measures to achieve a central goal or to vital assets of military significance; and geo-strategic merges strategic considerations with geo-political ones.”2 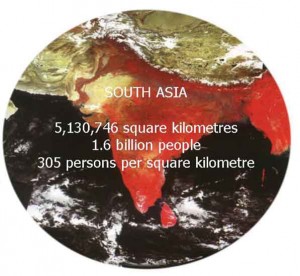 In simple terms, “geo-politics” is the question of who is doing what, to whom, and why in the world. It is an issue which can be ignored at one’s peril. A “geo-strategic region” can be defined as a region within which a state’s interest’s lie and it considers using political, economic and military instruments of power to safeguard its interests. It is important to examine the geo-strategy of South Asia with the focus on the central position of India, given its size and ability to influence the region.

India – The Core of South Asia

“India is a perennial puzzle for geo-politicians. For all its near-billion population, to it’s should-be booming economy and its admirably efficient army, India always seems to be held back by something – it’s fragile sense of national identity, the geographic isolation of the India sub-continent between mountains and sea, may be the inward-looking nature of the Hindu religion – from becoming the sort of country that strides confidently onto the world stage. What India says gets listened to respectfully in the triangle South of the Himalayas; farther afield, it’s voice fades”3

India is on the worlds stage as the first large, economically powerful, culturally vibrant, multi-ethnic, multi-religious democracy outside of the geographic West.

As the modern avatar of an ancient civilisation and heir to the British Empire’s pre-eminence, India’s overriding national security goal is to establish “its rightful place in the emerging world order”4. While the main thrust of Indian foreign policy has been consistent since independence, Indian grand strategy has slowly adjusted since the end of the Cold War. India is now “on the verge of multiple breakthroughs”.5 Even if this assessment proves premature, New Delhi has successfully maintained the general contours of its grand strategy amidst several changes of government since 1991 and is unlikely to make major alterations in the near future.

India is on the world’s stage as the first large, economically powerful, culturally vibrant, multi-ethnic, multi-religious democracy outside of the geographic West. India has the potential to become a leading member of the “political West” and to play a key role politically in the coming decades. Whether it will, and how soon, depends on the readiness of the Western powers to engage India on its own terms.6