Conspiracy to propagatise Kashmir with added weapon of disinformation, causing situation inflammable. Fallacious information are being spread by cross border player(s). As of date, Government of India looks ineffective in containing it which requires effective Global consensus.

The abrogation of Article 370 on 5th August 2019 marked the arrival of a new era in the valley. It allowed certain autonomy to the state government of Jammu and Kashmir wherein they had separate laws regarding citizenship, fundamental rights, and property ownership as compared to the rest of the India. The Government of India had been contemplating to abrogate Article 370 since the Pulwama attack. Modi Government was under constant pressure from patron RSS to take decisive action and valley was getting pulse of it.

Influential circuit in Kashmir as well as the Government of India, both were expecting to implement predated action much before it was executed by President Ram Nath Kovind, but timing was something that shook the players.The Aftermath,such a historic implementation of power by the Indian Government was predictably welcomed with a warmly out-side Kashmir. Albeit Jammu & Kashmir province shown its mixed reaction.

The abrogation,followed by heavy clamps with the ceasing of the internet connection, curfew on the public as well as media movement and a complete ban on political activities.The main political leaders being put under house arrest and other institutional confinements helped put a check on violent protesting of any kind. Understandably, people of the valley reacted adversely, yet they majorly opted for a peaceful protest.

In all this, India’s next-door neighbour, Pakistan seemed to have found itself in an irreparable loss, or at least the noise they started making after made it look like so. Evidently, they did not see it coming so fast, especially right after the Lok Sabha. Even Pakistan circular have discussion that Imran Khan’s boasting rhetoric caused this early circumstances.

Moreover, the Pakistani army establishment being entirely based on creating Anti-India hatred ironically left with their hands tied.Being helpless Pakistan launched a full-fledged propaganda attack against India that was entirely based on disinformation. Every Pakistan embassies activated to spread fallacious information related to India within and outside Pakistan.Pakistan newspapers were filled with ISPR (Pakistan Army media wing) sponsored press releases. Despite no media movement, no official statement, no public or political activities in India,a popular print media – DAWN,GEO & many other global claimed losses of 40 lives in the first two days of the abrogation which was absolutely baseless. Indian Government never issued any statements in these regards.News like mass killing by the Indian Army was made to be viral worldwide and particularly, in Islamic countries.Gulf based several electronic channels were highly paid.

#Social media postings using edited pictures, many of which were taken from the pictures of Syria and Palestine, mixed videos with edited voiceovers claiming mass devastation in Kashmir started circulating from Indonesia, Vigur, Rohingyas and many more.Alliance with several media channels, paid editorials and being flooded with paid comments proved to rake strong cyber trolls to defame India worldwide.

Such disinformation warfare coupled with ongoing campaigns like #ThanksJinnah, #ExposeIndia,#ShameOnIndia were strategies deployed by Pakistan to prove themselves to be a better nation than India. Besides this, the slower GDP even than Bangladesh, hallowing inflation, sitting in the lap of China, widening starvation, CPEC fall out, and constant EMI default to IMF, anti-Indian rhetoric serves ever green platform to prove their existence.

There are few ISPR propaganda tools exposed below:

•  Fake News Websites: There are abundant news websites fraught with malicious volcanic stories, running across border.These websites were propagating images across world-wide even during Indian curfew. Some websites have task only to take paper clips and mould present news in some other context.While tracing IP addresses they are located to places like Islamabad, Rawalpindi, Dubai,Saudi Arabia and so forth.

The account used a picture of a girl, originally from Iraq, posting as a Kashmiri, to insult the security personnel of Jammu and Kashmir 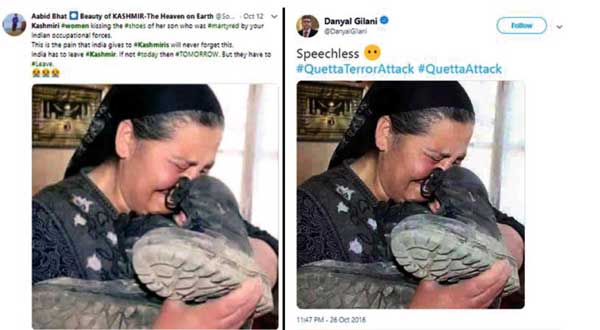 Neelam Gul, famous Pashtun actress and singer was a victim of domestic violence at the hands of her husband, is viraled as a woman thrashed by Indian Army 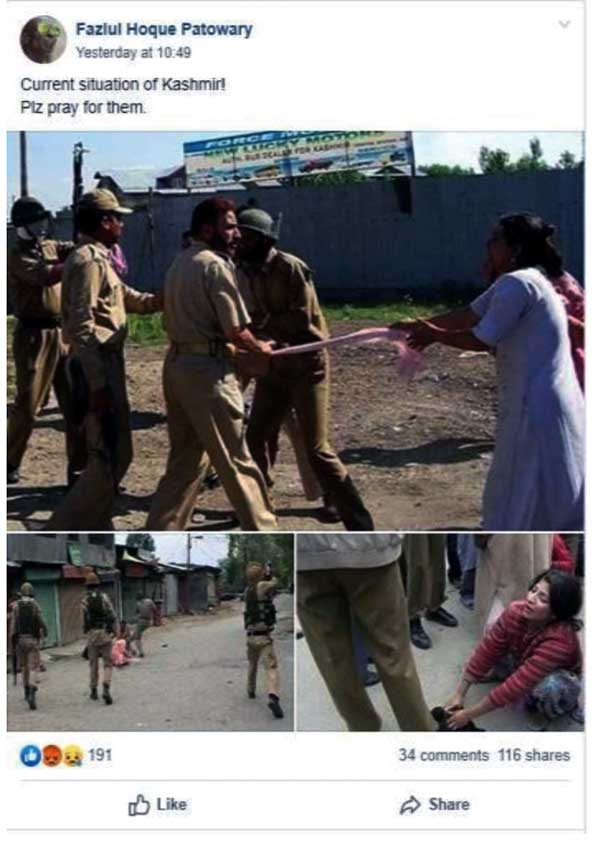 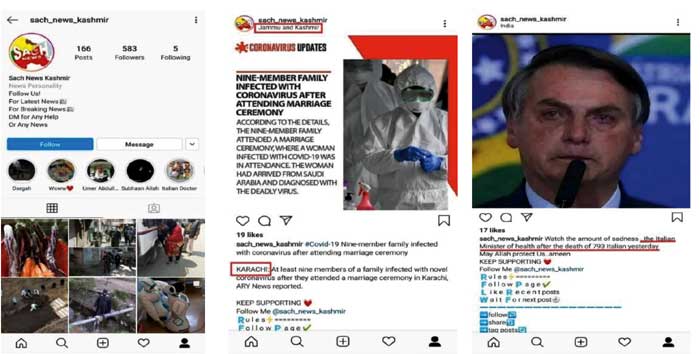 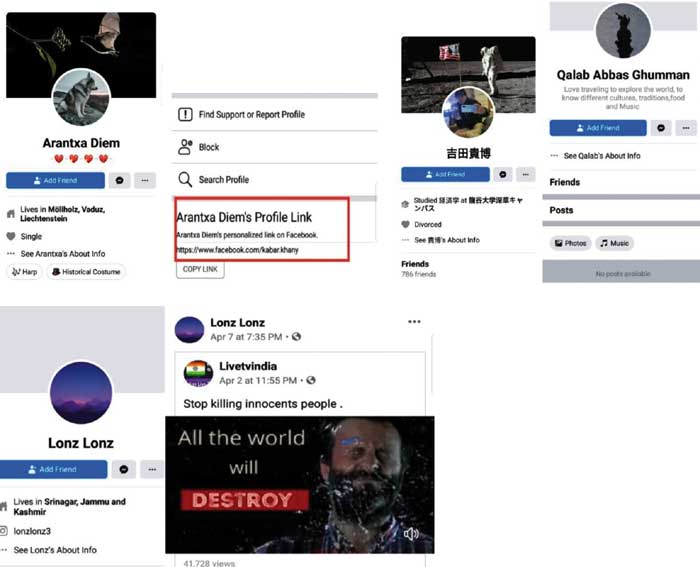 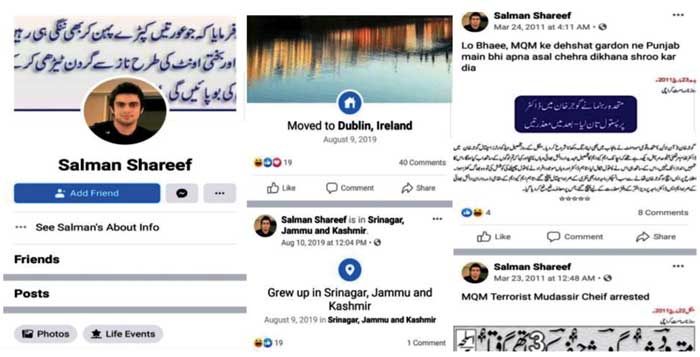 Unverified and unclaimed dis-information are commonly circulating among unemployed youths 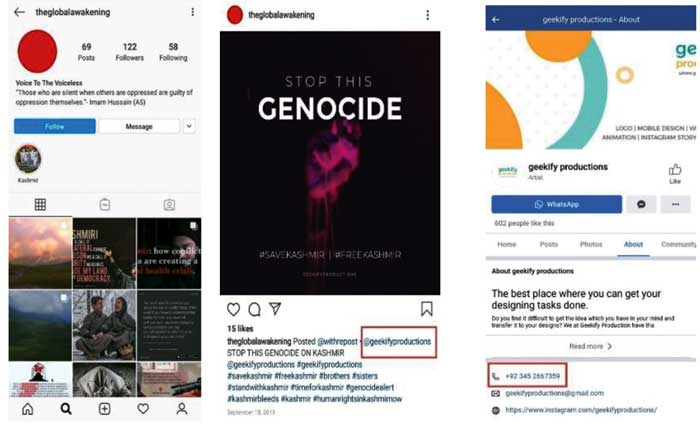 Active pages from Pakistan targeting international community for their propaganda

•  Creation of Third Country Identity: Hundreds and thousands of social media IDs are created country wise to attract and mislead local people. IDs could show its like Turkey, Bangladesh, Indonesia, Afghanistan, Srilanka,Russia and something like that. They have agenda to attract locals then these IDs start putting propaganda content against India inorder to tarnish image. Recently Facebook deleted 3 billion fakes accounts & Twitter removed 20000 accounts majorly running from Saudi Arabia and China. 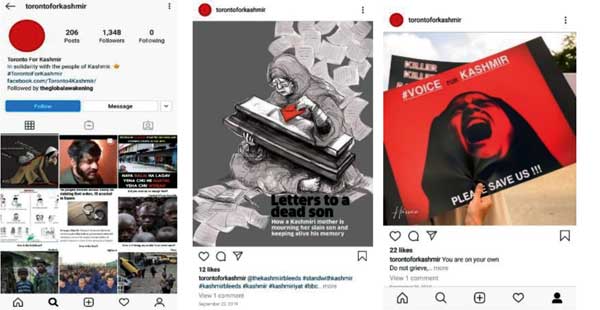 •  Attacking opinion platforms: Generally youth and college going students are being hired by ISPR either on volunteer role or paid basis. Their task is to flood global media channels, Twitter pages with misleading, will provided contents to confuse readers if they visit comment box. 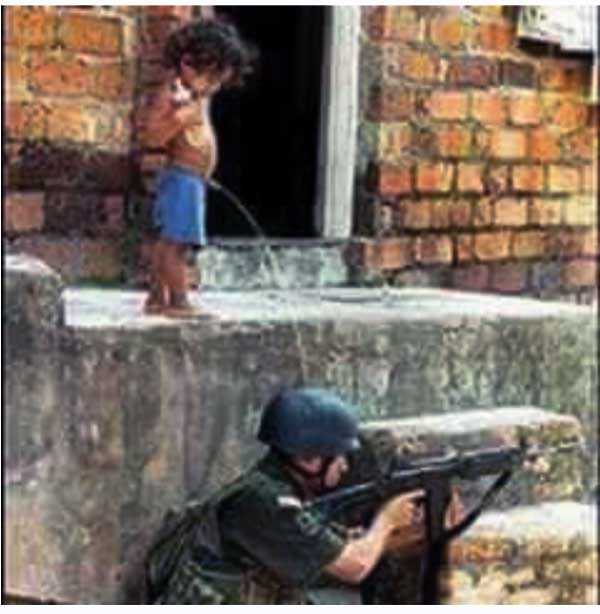 Demoralising posts and comments used against for sensible users

•  Virable fake datas: A centre points creates fake data which are violent in nature and ask volunteer to circulate in major worldwide groups.These could be manufactured data, edited photos, videos. They get some Rs or cents for each comment.

Ali Haider Zaidi, a senior minister from Pakistan used an unrelated and old video of an incident from Panchkula to falsely project as the brutality of Indian army in Kashmir 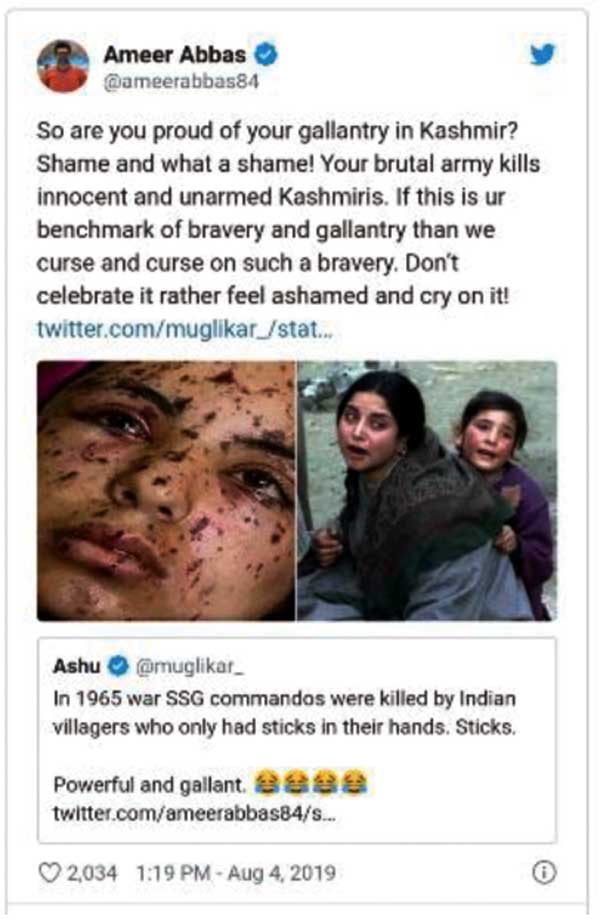 A senior journalist and anchor Ameer Abbas tweeted two graphic images claiming brutality by Indian forces, one was takes in Gaza in 2014 by US photographer Heidi Levine and another shows two girls in tears which was taken in Kashmir but was traced backed to February 2004

•  Documentary Channels: Pakistan is running surmountable testimonial channels.Their agenda is to cut India news in clips and change voice over to propagate shallow agenda of superiority.These documentaries generally have outside country videos, graphics and pixels like many videos will have USA, Israel & Russian army footages. 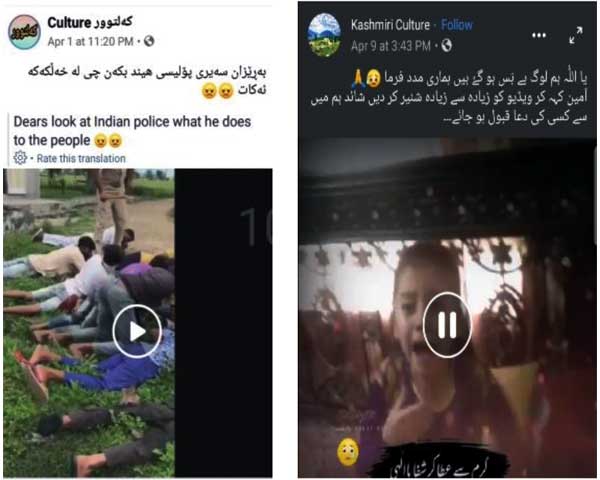 Images of Palestine are being broadcasted under Kashmir banner

•  Planted News: Decades old formula widely accepted in Pakistan and outside. Ironically, these ISPR don’t even change headings and sub-contents in channels.Every Channels will have same heading and narration. 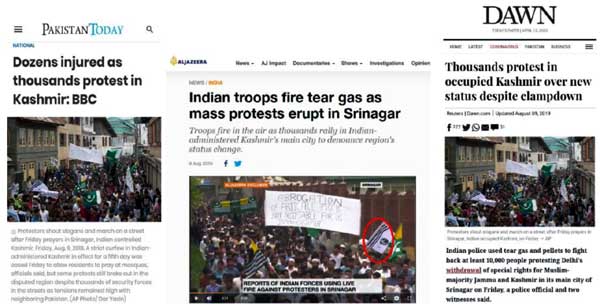 When internet is closed, media is not allowed, curfew is imposed & no mass movement is visible in valley but Pakistani media has the daily news

•  Hoardings & Flashboards: Pakistani establishment got exposed badly when her representative shown pellet embedded girl’s image in UN. In reality, that image was from Palestine shot by British photographer. Creating and circulating such pellet images are taking in millions of reach across Pakistan & worldwide where simple images are edited software’s like Corel, pixelpro and many others. 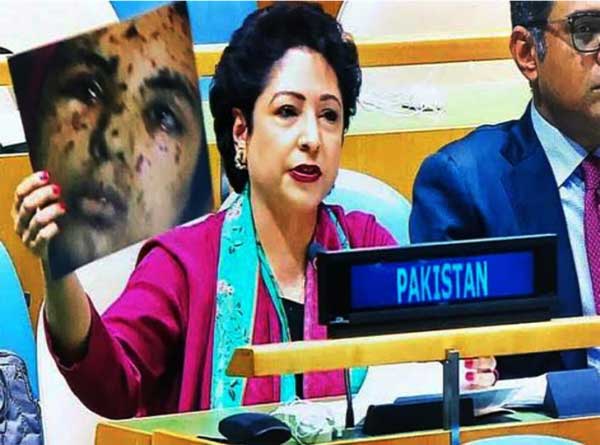 Images of Kashmiri Pandits who were attacked by Jaish –E -Mohhamad ,Pakisatani led armed groups in 1991, and images of Delhi communal riots of 1984

•  Exhibition Show, Protest outside Pakistan: After abrogation of 370, Pakistan is widely using shows to inflate and mislead Kashmir points. Pakistan diaspora were deaneded hefty amount to donate for running such campaigns. 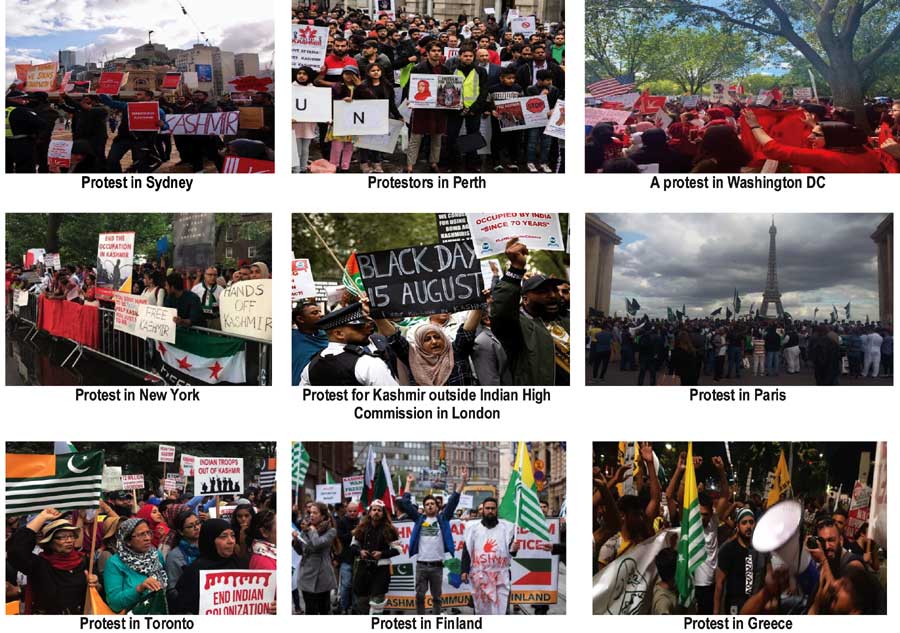 Such vans were seen on the roads of London, Birmingham, Bradford, Glasgow and Manchester. They ran across UK as a part of campaign called “British Friends of Kashmir”

It’s silly to know how Pakistani Army spends billions in running such fruitless propaganda using taxpayers amounts. These propagandas are not new, it’s running since inception.It just that got new tool and methods in the era of digital communication which are creating platform of cyber-terrorism. There is no global census and uniform policy on cyber-crime. They need effective & measurable plans to curb such disinformation.

As of date, GOI sheerly looks ineffective in curbing it.They are confined around restricting internet and deleting few accounts. By all means, the fact remains that the situation in the valley is normal. Though at the onset of it, the situation was delicate, yet therewere no bloodshed, no mass killing, and no stone peltings as

such as was claimed by the false propaganda.Slowly, normalcy is returning to the valley with the internet connection being restored and the leaders freed from their respective confinements.Government of India has declared historic budget to make J&K as fastest growing province of India.Youths are being attracted towards sports, job and employment. There are several policies are under review to make Kashmir a biggest export hub keeping peace and unity fragrant on this magnificent land.