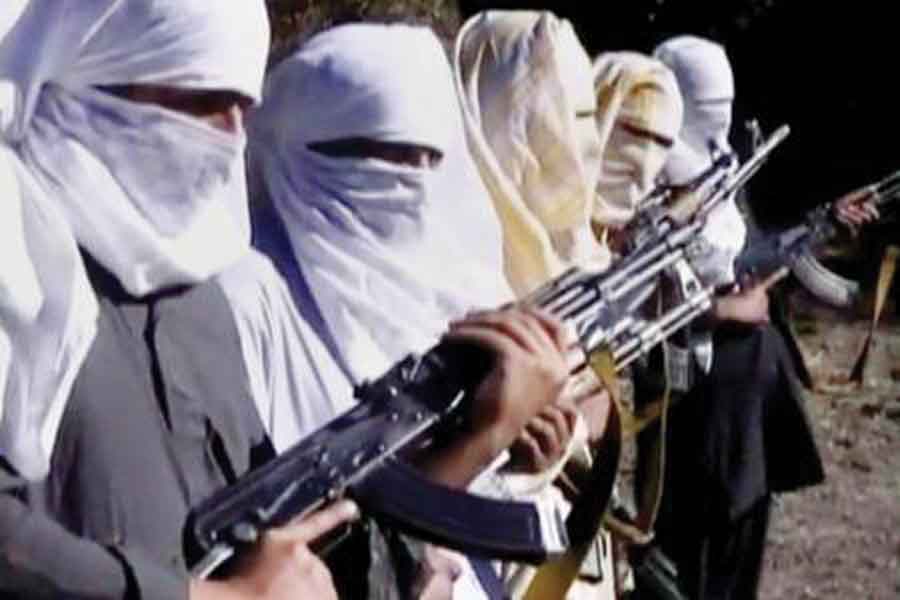 Since American offensive started in Afghanistan against Taliban regime in 2001, the entity remained homogeneous without any serious fractionalisation in exile till June 18, 2013 when Taliban political office in Qatar was inaugurated. According to Mullah Rasoul, leader of one of the breakaway faction of Taliban, Mullah Omar was killed one day before the opening ceremony of Qatar office. However despite the fact that leadership continues to change after this event, the organisational structure of Taliban remains more or less intact. 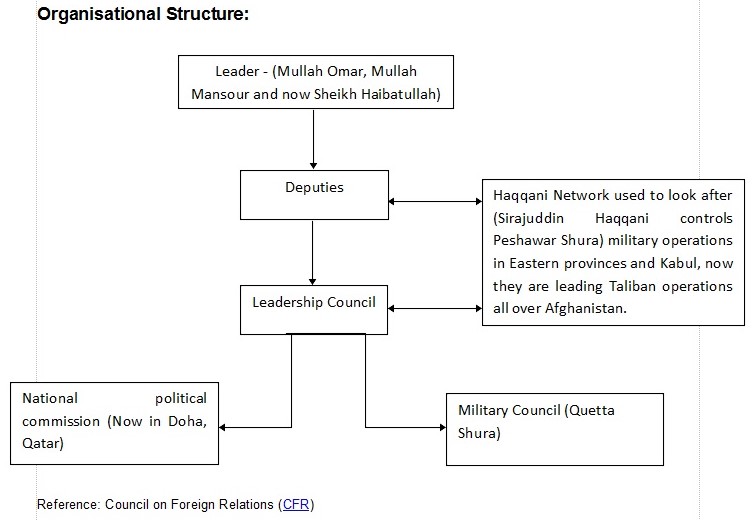 Taliban opened its political office in Qatar to earn political legitimacy and facilitated platform for the negotiations with other countries. Furthermore it maintained high hopes for peace talks in international community as well as in Afghanistan, though now it looks like the part of deception.  On the other hand Taliban changed its tactics on ground.Taliban opened multiple fronts all over Afghanistan rather than just fighting against Afghan forces in its strong hold in the South that is Kandahar and Helmand, as like in the past. By this move Taliban wanted to prove that ‘they are not just a terrorist organisation but it is an armed struggle against the puppet regime of Kabul’. With coordinated successful attacks on Kuduz, Lashkargah and Oruzgan, Taliban partially succeeded in proving their point, that they enjoy popular support across many parts of the country. Such attacks had a psychological impact on common afghan citizens as well as morale of Security agencies.

There has been no debate on the issue of ‘Taliban insurgency in Afghanistan is controlled by Pakistan Intelligence agency’ in any point of time. It has been proven from time to time, for example when Punjabi Taliban splintered from TTP in September 2014, and Chief Ismatullah Muawiya said that they will operate under Afghan Taliban leadership hence forth. Another fact which supports this argument was the video released by the Latif Mehsud former TTP commander and close aide to Hakimullah Mehsud. He was captured by American forces and handed over to Pakistan. Later he was brain washed in Pakistani jail and he gave statement against Afghan Intelligence (NDS) and Indian Intelligence service (RAW) accusing them of being involved in the emergence of TTP.

In 2014, Coalition forces started drone strikes against Al Qaeda, Islamic Movement of Uzbekistan (IMU), Members of Islamic Jihad Union, Lashkar-e-Tayyaba, TTP and Hizb-e-Islami Khalis. In intelligence based targeted operations,most of leadership of these groups were eliminated. But at the same time with supportand under protection of Afghan establishment in Nagrahar the terrorists who migrated from Waziristan settled down as one of the Afghan media reported. Initially they supported government initiatives in the region and fought against the Taliban alongside ANA. But later as they gained strength,these groups declared allegiance to IS. In response, Al Qaeda in order to maintain its credibility in the region, renewed its oath to Taliban leader Mullah Omar.

Another reason behind this move was, AQ and Taliban had developed differences after the death of Osama Bin Laden in 2011.2013-14 was an important year for insurgency in Afghanistan, because of a host of reasons, most notable being;withdrawal of majority of the Coalition Forces, Mullah Mansour’s unofficially taking over of Taliban operations, Dr Ghani’ selection as Afghan President and new military and political leadership take over in Pakistan.  These changes were followed by the resurgence of Tehrik-e-Taliban Pakistan (TTP) and Pakistan’s military operations in North Waziristan area which forced many disgruntled groups to move from Miramshah, Bannu, DattaKhel and Orkazai region to border provinces of Afghanistan, includingKunar, Nagrahar and Pakhtia etc.

Further this migration of militants gave birth to so called Islamic State (IS) in those provinces. Amidst all this, Taliban continues to redefine its approach towards changing scenario in Afghanistan and according to that it has reorganised its leadership and continued to mount heavy casualties on Afghan forces by adopting new tactics.

Later in the same month military leadership of Taliban disassociated themselves from the peace process.

These developments suggested that either Taliban was buying more time to consolidate power by pretending to show interest in dialogue or it could be because of the growing split within Taliban ranks.

As Taliban was reaching out to Tehran, Riyadh and their representatives talked  to officials from Moscow in July- August of 2015, in the north of Afghanistan, former Northern alliance leader Atta Nur announced the coalition of Jamat-e-Islami, Jubish-i-MilliIslami and other Islamic parties to fight against advancing Taliban and asked Dostum and Mohaqiq to join him. In reality, this coalition was never formulated because of internal differences between these leaders and power politics in Kabul. The common ground which can bring these people together in the future is opposition to peace process.

In July 2015, Mullah Mansour was elected as leader of Taliban after the news of death of Mullah Omar was confirmed by Afghan establishment, Taliban and Pakistan. His appointment was opposed by the powerful elements of Taliban, and those were Mullah Manan, Mullah Yaqub, Mullah Rasoul, Mullah Zakir and Mawalvi Tayyab Agha. Mullah Rasoul established breakaway faction and appointed Abdul Manan Niazi, Mansour Dadullah and Shir Muhammad Akhudnzada as deputies of military affairs and Mullah Baz Mohammad Haris for political affairs. Following this development Mullah Manan declared that Rasoul faction is ready for the peace talks in case of complete withdrawal of foreign troops. Rasoul criticized Qatar office for directly dealing with Americans. However this opposition group couldn’t survive for long, Dadullah was killed in Zabul by Mansour supporters and Rasoul was arrested by the ISI. But small faction of this group is still fighting against the Taliban in Helmand.

On the political front; head of Qatar office Tayyab Agha stepped down in August because of his opposition to appointment of Mansour as Taliban leader. Sher Mohammad Abbas Stanekazai took his place and Abdul Salam Hanafi was appointed as his deputy. This new political leadership favoured peace talks.

As Mansour was consolidating his hold on the Taliban, the third Taliban faction started challenging his position which includes very powerful and core leadership of Taliban and they  were Maulavi Abdul Jalil (Former deputy foreign minister), Mullah Hasan Rehmani (Former Governor of Kandahar), Mullah Hasan Babur (Former Minister of foreign affairs), Mullah Abdul Razaq. In January 2016, Taliban expelled Mullah Razaq and Mullah Rehmani. Later Rehamani died in Pakistan hospital because of Hepatitis as reported. However these two commanders were the part of three member’s delegation that met High Peace Council in Urumqi, China in 2015 and also part of delegation arrived in Islamabad for second round of peace talks in July 2015 that were cancelled following the news of death of Mullah Omar.  After neutralising two major oppositions and with the support of ISI and IRGC, Mansour took over as Taliban leader.

Further to increase his position and support base, Mansour formed two members committee comprising Mullah Matiullah and Noor-ut-Turabi, and they engaged in talks with Mullah Zakir, Former military commander of Taliban. Because of successful mediation by Sirajuddin Haqqani; Mullah Yaqub, Mullah Manan and Mullah Zakir dropped their opposition to Mansour. In April 2016, Mullah Yaqub was appointed as in-charge of Military commission in 15 of Afghanistan’s 34 provinces. The military commission was headed by Mullah Ibrahim Sadr. Mullah Manan becomes head of preaching and Guidance committee and Mullah Zakir rejoined Quetta Shura. This for the first time in the history of Taliban, leaders other than Pashtuns weregiven space in the Council, those were Maulavi Abdul Rehaman (Uzbek) and Sheikh Sharif (Tajik).

Takeover of Taliban by Haqqani

In all these developments the winner was chief of Haqqani Network, Sirajuddin Haqqani who became the second in command in the Taliban hierarchy. After death of Mullah Mansour in American drone strike near Quetta, operational command went to Haqqani. Mullah Mansour was a capable Military commander unlike present Taliban leader Mullah Haibatullah Akhundzada who is a religiouscleric.   There was no opposition to the appointment of Haibatullah as leader of Taliban and the initial fragmentation neutralized with his appointment and Haqqani became the sole king maker and commander of Taliban.

Hence the game restarted with his Eid message, Haibatullah asked for complete withdrawal of foreign forces, and on the other hand in July 2016, Abbas Stanekzai head of Taliban political office in Qatar visited Beijing.