Deterrence Against The Dragon: Why Agni’s Arc Worries China 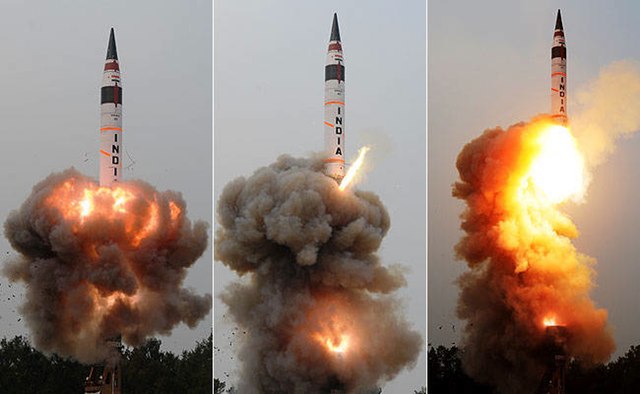 The shrill, disjointed and illogical rants emanating from Beijing after the fourth successful test of the Agni-V missile is an adequate proof that nothing succeeds like deterrence. By developing a missile designed solely for raining down nuclear warheads at the Han heartland, India has effectively neutralised the Chinese nuclear threat.

Deterrence is the threat of massive retaliation in order to prevent an enemy attack. It is a fundamental principle for India, which has declared a “no first use” policy on nuclear weapons – and by extension ballistic missiles. The deterrence provided by the 5,500 km Agni-V will force Beijing to abandon attack and remain in a state of status quo or paralysis.

The missile was cold launched from a hermetically sealed canister mounted on a tractor-erector-launcher (TEL). “Launch from a canister integrated with a TEL enables launch in minutes as compared with a silo – or open – launch. It also has advantages of higher reliability, longer shelf life, less maintenance and enhanced mobility,” says the Defence Research & Development Organisation (DRDO).

A mobile system will allow India to keep the Agni-Vs constantly moving along its road network, thereby keeping the enemy guessing all the time. Throw in several dozen dummy canisters and TELs, and you add more uncertainty about the exact whereabouts of the real missiles.

Indians have lived under the shadow of the Chinese nuclear arsenal for more than five decades. Now the Chinese will know how it feels to have their cities in the Agni’s arc. Once the road mobile Agni-V is deployed – or rather scattered in locations known only to India’s strategic forces command – China will be sandwiched between two well-armed and adversarial nuclear powers.

The US has around 7,100 atomic warheads deployed on several hundred ICBMs, submarine launched ballistic missiles (SLBMs), land attack cruise missiles and strategic aviation. Against this formidable arsenal, the Chinese have an estimated 260 warheads on 75 to 100 silo-based and road mobile ICBMs. The status of the Chinese SLBM force is hazy, but it can deploy no more than 24 missiles and has never conducted a deterrence patrol, which is essential for a credible sea-based nuclear force.

Now imagine upstart India with approximately 100 nuclear warheads and no ICBMs suddenly embarking on a massive ballistic missile build-up aimed at China. India’s rise could be similar to Russia’s. After the 1962 Cuban Missile Crisis, a chastened Moscow had launched an unprecedented military expansion to achieve parity with the US. By the year 1969, it had overtaken the US in nearly all areas of nuclear delivery, especially silo-based and road mobile ICBMs. Similarly, India’s growing economy will allow it to quickly narrow down the gap with China.

In fact, India doesn’t have to spend recklessly like the Soviet Union. At the peak of the Cold War in the mid 1980s, Russia had 40,000 nuclear warheads and thousands of missiles. The US had over 25,000 warheads. Against such large megaton capabilities, the Chinese had between 20 and 70 ICBMs. If such a puny number of missiles gave China deterrence capability against the US and Russia, then even fewer Agnis aimed at downtown Beijing and Shanghai will do the same for India vis-à-vis China.

The Chinese, in whose strategic reckoning India has rarely caused more than a ripple, are no doubt discombobulated by this new threat from across the Himalayas. The state-controlled media has denounced India for deliberately testing the missile in a flat trajectory to suppress its range in order not to upset Europe and the US. The Chinese are certain the Agni-V has a range of 8,000 km rather than 5,500 km as claimed by India. While this allegation may or may not be correct, what is more likely is that China is clearly alarmed at discovering a missile with its name on it.

Apart from the envy factor – the Chinese have had little success with their similar Dongfeng-31A launcher – India’s new mobile missile complicates Chinese nuclear strategy. Currently, China keeps most of its ICBMs in silos while the nuclear warheads are in storage. This strategy conveys a message to the US: “Yes we are puny but we can cause unacceptable damage if you attack us.”

The Chinese are aware of the dangers of entering a wasteful missile race with the US and are therefore keen not to set off alarm bells in the Pentagon. “Overall, China appears to be playing the numbers game very cautiously to consciously avoid a missile race. It has learnt its lesson from the Soviet experience,” says nuclear security expert Manpreet Sethi of the Centre for Air Power Studies in a paper titled ‘China’s Ballistic Missile Capability and India’s Preparedness’.

This is where the Agni-V plays spoiler. Since road or rail mobile missiles are deployed far from nuclear storage depots, they must be mated with warheads to be able to pose a credible deterrence. So in the future we could have a situation where a large number of ready to fire Indian missiles are aimed at China without Beijing having a corresponding ability. The relentless Indian missile development therefore places Beijing in a strategic straightjacket.

“Just as China sows doubt in the US mind that its nuclear forces are invulnerable to a disarming first strike, and willing and capable of mounting a punishing second strike, India too has to underline that a nuclear attack by China would result in assured retaliation to cause unacceptable damage,” says Sethi.

The recent stridency in China’s tone towards India is due to New Delhi’s relentless ballistic missile development programme that threatens to upset the strategic balance currently in Beijing’s favour – but certainly not for long. In this backdrop, the Agni-V is a true gamechanger.

According to the fifth century Chinese strategist Sun Tzu, the ideal victory is that which is won without actual fighting – that is by guile or persuasive diplomacy. The Agni-V test has set off Beijing’s deepest insecurities of being encircled, resulting in the dragon issuing petulant statements not befitting a country of its size and strength. Without firing a shot in anger, India clearly has won the battle of the mind̻.