Presenting the last full-fledged budget before the general elections of 2019, Finance Minister Arun Jaitley allocated Rs 4,04,365 crore (US $62.8 billion) for the Ministry of Defence (MoD). Of the MoD’s total allocations, Rs 2,79,305 crore ($43.4 billion) was earmarked for what is widely considered as India’s defence budget, and the balance was distributed between MoD (Miscellaneous) (Rs 16,206 crore) and Defence Pensions (Rs 1,08,853 crore). Like in the past several years, the defence budget for 2018-19 also grew marginally, with much of the growth being cornered by rising manpower cost. This Issue Brief highlights the fact that controlling manpower cost (pertaining to both serving and retired personnel) will be key to India’s defence modernization and operational preparedness.

…manpower cost driven growth in defence resources has led to an undesirable situation for both military modernisation and operational preparedness.

Economic Context of the Defence Budget

The defence budget comes at a time when the economy, shedding the short-term hiccups owing to demonetization and implementation of the Goods and Services Tax (GST), is back to its former form. Riding on the export uplift from the global economic recovery as well as the success of the many structural reforms undertaken in the recent past including GST, efforts to tackle the twin balance sheet (TBS) problem of the corporate and banking sectors, and further liberalization of foreign direct investment (FDI) policy, the gross domestic product (GDP) is forecast to grow at 7.0-7.5 per cent in 2018-19. GDP growth is expected to further accelerate to 7.8 per cent in 2019-20, predicts the International Monetary Fund (IMF) in its World Economic Outlook Update released in January 2018.

Two consecutive years of 7.0 per cent or more growth would make India the fastest growing large economy in the world, ahead of China whose growth was marginally higher than India’s in 2017.

The growth in GDP apart, the economy continues to impress on several macro-economic and other performance indicators – be it inflation or current account deficit (CAD), foreign exchange reserves, stock market performance, and the tax base, which has grown by 1.8 million (or three per cent of the 59.3 million individual tax payers as of 2015-16) as a result of demonetization-cum-GST. Although rising international crude oil prices, and the possibility of a sharp correction in stock prices fuelling a flight of capital remain two critical risk factors, the overall picture of the economy remains robust.

…the total increases in the revised revenue expenditure, nearly 79 per cent is due to the increase in the pay and allowances (P&A) of the three armed forces.

The mood of the economy, which is also reflected in improved tax buoyancy, has, however, not stopped the government from deviating from the promised fiscal consolidation path. The Finance Minister has allowed the fiscal deficit (excess of government expenditure over non-borrowed receipts) to increase to 3.3 per cent of the estimated GDP of 2018-19 – as opposed to three per cent as promised earlier. While a large fiscal deficit (not uncommon in a pre-election full-fledged budget) has its own adverse effects on the economy as a whole, it has nonetheless allowed the government to incur a larger expenditure. This is reflected in the 14 per cent increase in the overall Central Government Expenditure (CGE) for 2018-19, in comparison to the nine per cent growth on the previous occasion.

The double digit growth in the CGE has, however, not fully percolated down to the defence budget, although defence pensions and MoD (Miscellaneous) expenses, which are part of the overall allocations to the MoD, have been benefited. That, in turn, has meant that much of the growth in the defence budget and in the MoD’s overall allocation has been driven by manpower cost, a feature that has been seen in the past several years, particularly after the implementation of the 7th Central Pay Commission (CPC) recommendations and the One Rank One Pension (OROP). As discussed later, manpower cost driven growth in defence resources has led to an undesirable situation for both military modernisation and operational preparedness.

The overall increase in the defence allocations (or the Budget Estimate) for 2018-19 has been 7.7 per cent. However, the growth declines to six per cent in comparison to the Revised Estimate (RE) of the previous financial year. This decline in growth is due to the upward revision of the previous allocation (Table 1). However, it is important to note that the upward revision is entirely due to an increase in revenue expenditure, with the capital expenditure remaining exactly the same. 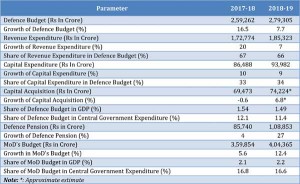 Table 2 summaries the key defence statistics of the 2017-18 and 2018-19 budgets. The 7.7 per cent increase in the defence budget and the 12.4 per cent growth in MoD’s total allocation in 2018-19 have affected key defence parameters in different ways.

Among all the parameters, defence pension, which caters to roughly 2.5 million pensioners, including some 5,62,000 defence civilian pensioners (Table 3), has seen the highest growth, and is the biggest contributor to the growth in MoD’s overall allocation. The share of the defence budget in both GDP and CGE have declined.

In so far as the defence budget-GDP ratio is concerned, the latest ratio of 1.49 per cent is, in fact, the second lowest since 1950. However, such ratios must be read with caution as the methodology for estimating the GDP from 2011-12 onwards is different from the earlier methodology, with no updated figures available in the public domain yet for the previous financial years.

Although capital expenditure as a percentage of the total defence budget of 2018-19 has increased, it has not been increased enough to correct the imbalance seen in the revenue-capital mix during the last several years. 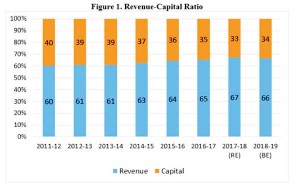 As can be seen in Figure 1, the present share of capital expenditure is still six percentage points lower than it was in 2011-12. From a purely statistical perspective, for an ideal ratio of 60:40 to be maintained in 2018-19, the capital expenditure needs an extra allocation of Rs 29,560 crore, which, at the moment, seems next to impossible. 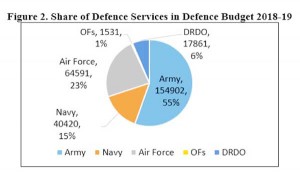 Among the defence services, the Army has the largest share in the defence budget 2018-19. The Indian Air Force comes a distant second, followed by the Navy, the Defence Research and Development Organisation (DRDO), and the Ordnance Factories (OFs) (Figure 2). 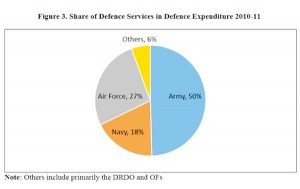 It is worth noting that the Army’s share in the latest budget is five percentage points higher than it was in 2010-11 and its growing share has come primarily at the cost of the sister services (Figure 3). The main reason for the Army’s increased share is because of its enormous numbers of personnel.

Table 5 summarizes the overall modernisation budget of the three forces; whereas Tables 6 to 8 provide the distribution of outlays and their growth under various heads.

As can be seen, the overall allocation for 2018-19 has not only grown (although marginally) over the previous outlays but also the latter is almost fully utilized at the revised estimate stage. It is, however, not yet clear if the near full utilization of the previous allocation is due to the efficiency of the procurement machinery or because the allocation was barely enough to meet all the ‘committed liabilities’.

It is true that, of late, because of the resource crunch, the total allocation under the modernisation budget has been consistently less than even the projected committed liabilities.

Given this, a mere 5 to 7 per cent growth in the latest modernisation budget is unlikely to free much resources for signing any new big contracts.

Make in India in Defence

Defence & Aerospace has been identified as one of the 10 ‘Champion Sectors’ under the Make in India version 2.0, for renewed focus because of their “potential to become global champions, drive double digit growth in manufacturing and generate significant employment opportunities.” To incentivize this crucial sector, Finance Minister Jaitley has announced several measures in the budget speech, apart from numerous other measures announced outside Parliament.

The two key budget announcements directly concerning domestic industry are: an industry friendly Defence Production Policy 2018, and two defence industrial production corridors. In addition, the announcement extending the reduced corporate tax of 25 per cent to all companies with a turnover of up to Rs 250 crore is likely to benefit a large number of Micro, Small, Medium Enterprises (MSMEs) in the private sector that are engaged in defence production.

While the above mentioned steps are in the right direction and, if implemented well, will benefit India’s self-reliance efforts, what is bothersome is the paltry sum of Rs 142 crore provided under the ‘Make’ head of the defence budget, which is intended to provide financial assistance to the Indian industry to undertake design and development, leading to indigenous production. The meagre sum means some of the big-ticket ‘Make’ projects, particularly the Army’s long-pending Futuristic Infantry Combat Vehicle (FICV), are is unlikely to be awarded to the domestic industry in the coming fiscal year.

The Imperative of Controlling Manpower Cost

Together, a mere 7.7 per cent growth in the defence budget, which itself is less than 1.5 per cent of GDP, and a modernisation budget which is barely enough to meet the existing committed liabilities make a strong case for much higher allocations for defence than is being given now. However, any such demand must take into account the overall resources being made available to the MoD. In 2018-19, the MoD’s overall allocation was increased by a whopping Rs 44,511 crore, but less than 10 per cent of that went as an additional amount to fund modernisation.

What is significant to note is that this is part of a trend that goes back several years. Why has the situation come to such a pass? The answer lies in the government’s inability to control manpower cost which is growing at an exponential rate.

As can be seen from the Table 9, the share of pay and allowances and pension in the MoD allocation has been increasing consistently since the mid-2010s. A large part of this increase has come at the cost of the modernisation budget, which now accounts for less than one-fifth of the MoD’s total allocation, down from a high of 26 per cent. This is highly undesirable and needs to be corrected at the earliest for the sake of India’s robust defence preparedness.