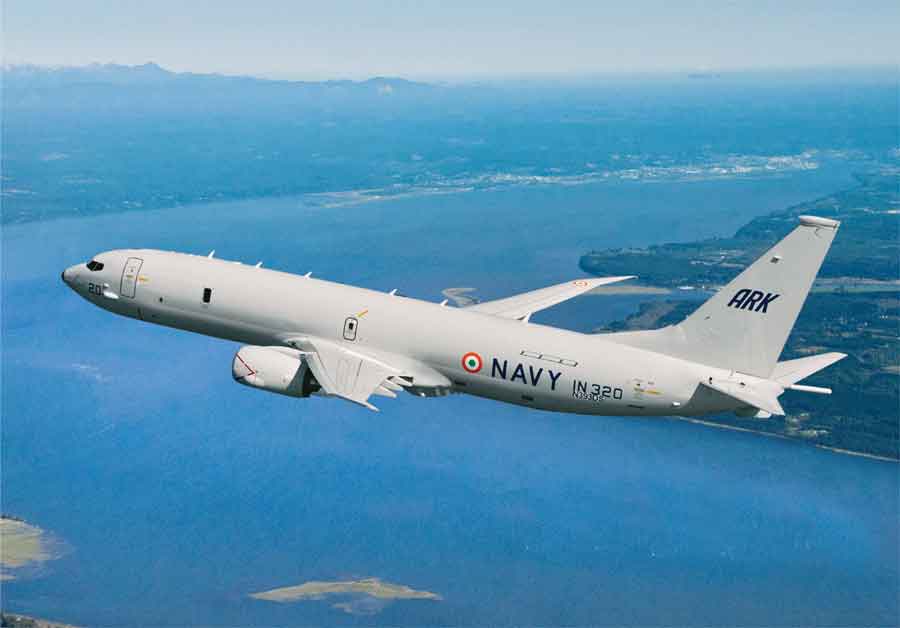 It is very rare that a defence acquisition programme follows the planned timelines. There are a number of reasons for the same. Over-ambitious and impractical production estimates pose major risks. Most system integrators depend on their vendors for timely supply of sub-assemblies and components. Their failure to meet deadlines can impede progress. In case a project depends on imported components, assurance of regular supplies acquires critical importance.

Every defence acquisition regime strives to ensure delivery of the defence equipment sought by the armed forces in the required timeframe and with the best value for money. In other words, the acquired equipment must satisfy the performance criteria as specified by the armed forces, the required quantity must be delivered as per the mandated schedule and the cost must be kept within the limits of the sanctioned budget.

Failure to adhere to the planned budget of an acquisition project is a rule rather than an exception.

Performance parameters, delivery schedule and budgetary provision are commonly known as Key Acquisition Imperatives (KAI). As shown in Illustration 1 below, KAI are intrinsically interlinked and are mutually dependent. For example, a defence system loses its value if it fails to achieve the performance parameters or is not delivered within the required timeframe. Similarly, projects may have to be shelved if they become unaffordable by exceeding budgetary provisions.

Although efforts are being made to explore the nature, degree and extent of the inter-se relationship between different KAI, no standardised equation has been evolved so far. Every acquisition programme has its own peculiarities involving numerous variables that impact the relative significance of each KAI. In case of an operational emergency, the importance of cost factor gets reduced whereas performance and delivery schedule acquire significance. As defence acquisition projects have a long gestation period, even KAI get modified – the user may upgrade or alter performance requirements, or delayed delivery may become acceptable due to abatement of immediate threat, or additional funds may become available.

As seen above, achievement of KAI is critical to the success of an acquisition project. It is always a daunting challenge as every acquisition programme entails accomplishment of a multitude of activities, both concurrently and sequentially. Numerous uncertainties afflict every activity. More worrisome is the fact that even an insignificant looking hitch can delay or thwart the achievement of KAI, thereby endangering the viability of the project. As defence acquisitions impact national security, no unforeseen glitches can be allowed to derail them.

‘If anything can go wrong, it will,’ is a common adage. Even the best laid plans rarely follow the premeditated path. Since acquisition projects are highly complex, it is absolutely essential to be prepared for all eventualities and be organised for initiating timely corrective steps. In other words, instead of undertaking fire-fighting operations in the case of sudden contingencies, it is better to anticipate them and have restorative plans in place to deal with them in a methodical manner.

A risk is a measure of danger or a threat that arises out of future uncertainties. All plans are based on certain premises and a premise is a belief. It presupposes that all elements will perform and deliver as anticipated. However, the future never follows the predicted pattern. When deviations occur, plans go awry and threaten achievability of a project. Plans can be salvaged and put back on track only in case the likely hurdles had been foreseen and contingency plans evolved to overcome them.

Identification of risks that can imperil an acquisition programme is by far the most important and difficult task. It requires deep insight and a thorough knowledge of the complexities of the processes involved. It is an endeavour to foresee what can go wrong at every stage of the project and identify the causative issues. Thereafter, alternatives can be explored to eliminate their occurrence or to minimise their adverse effects.

Risk management is a programme management tool for effectively managing future uncertainties associated with defence acquisitions. The primary objective is to establish a strategy that ensures achievement of the three key imperatives of performance, schedule and cost. According to the Risk Management Guide (for defence acquisitions) issued by the US Government, risk management is the overarching process that encompasses identification, analysis, mitigation planning, mitigation plan implementation and tracking. Further, it includes disciplines like programme management, systems engineering, earned value management, production planning, quality assurance, logistics, system safety and mishap prevention.

Risk areas are influenced by threat analysis, operational requirements, technologies involved, design/engineering challenges, manufacturing competence, existing support systems and ability to adhere to cost and delivery schedules. As shown in Illustration 2, most areas of potential risks are related to the achievement of KIA. 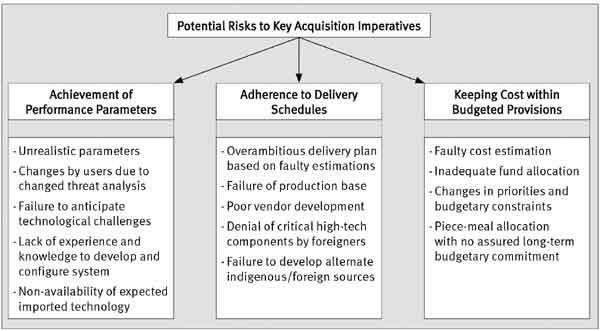 A vast majority of defence acquisition cases the world over struggle to achieve performance parameters prescribed by the services. The armed forces are often accused of demanding equipment of Utopian capabilities. Further, they are blamed for changing parameters midway, resulting in delays and excessive expenditure. Inability of the development agency to master newer technologies also poses severe risks. In addition, unexpected embargo on foreign technologies can threaten the viability of a project, especially for a country like India that continues to be dependent on foreign know-how.

An impartial ‘award and punishment’ regime helps in reducing risks due to human acts of commission and omission.

It is very rare that a defence acquisition programme follows the planned timelines. There are a number of reasons for the same. Over-ambitious and impractical production estimates pose major risks. Most system integrators depend on their vendors for timely supply of sub-assemblies and components. Their failure to meet deadlines can impede progress. In case a project depends on imported components, assurance of regular supplies acquires critical importance.

Failure to adhere to the planned budget of an acquisition project is a rule rather than an exception. As defence acquisitions entail a plethora of unforeseen challenges, it is quite difficult to estimate the financial implications at the outset. Moreover, there is a tendency amongst all acquisition functionaries to peg indicative costs at unrealistically low levels while submitting estimates, only to obtain official sanctions. They are confident in the belief that once a project is sanctioned, escalation in costs will be accepted without much ado.